Fourteen-year-old Zach Welton was adopted from Haiti as a toddler
Dec 10, 2014 5:00 PM By: Brandon Barrett 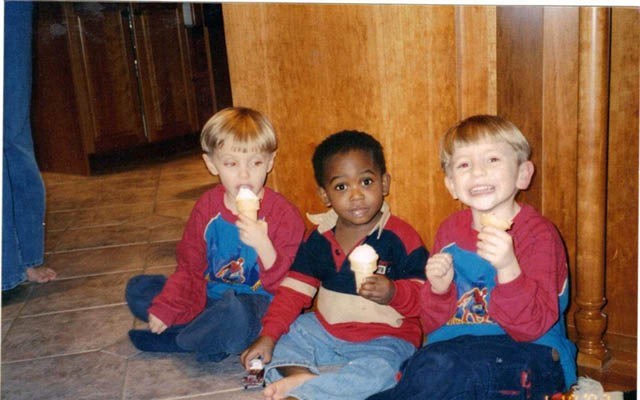 HOW SWEET IT IS Zach Welton has his first taste of ice cream a year after being adopted from a Haitian orphanage in 2002. Photo submitted

When Whistler Secondary student Zach Welton was given an assignment a couple weeks ago to fill out the branches on his family tree, he hesitated when he got to the spot reserved for his father.

That's because the 14-year-old had never met or even learned the man's name. The same goes for his biological mother, who died giving birth to him in a town in Haiti.

So instead, young Zach wrote down the names of the only people who had ever loved him like family, who were his family: His adoptive mother, Cathy, and older sisters Melissa, Amanda and Vanessa.

"Sometimes I forget I'm actually adopted," said Zach, his eyes glowing bright from under his baseball cap, a sheepish grin on his face.

Zach was adopted from an orphanage in a suburb of Port-au-Prince, the Haitian capital, where he was brought at just six weeks old, severely dehydrated and close to death. He is luckier than a lot of the estimated 750,000 orphans currently living in the Western Hemisphere's poorest country in that he has a warm bed to lay his head on and a doting mother who can regularly be seen racing down the sideline at each and every one of Zach's football games.

"My family pays a lot of attention to me," he deadpanned. "I'm way more spoiled than my sisters."

As a single mom, Cathy wasn't entirely convinced she could handle the responsibility of adding another child to the family. One thing she was always sure of, however, was that she desperately wanted a boy, and instantly fell in love with Zach the moment she first saw him in a video presentation at her Calgary church promoting the God's Littlest Angels orphanage.

"He didn't grow in my tummy but he grew in my heart," she said.

Immediately, Cathy set the adoption process in motion, researching and eventually visiting Zach's orphanage to ensure she was making the right decision. After a year and a half of paperwork, rigorous family and psychological evaluations and a political coup in Haiti that delayed the process, Zach was finally ready to come home. On Nov. 24, 2002, he officially joined the Welton family.

At two years old, Zach had a laundry list of medical issues. He had never had a bath, seen a car and at first refused to take off the only pair of shoes he had ever worn. Today, however, Zach is your average Whistler teenager; he excels at pretty much any sport he tries, he loves to ski and mountain bike and has more friends than he can count.

Not that there weren't some hurdles along the way. He's had racial slurs too vile to repeat thrown at him. When he was eight years old living in southern Alberta, two boys lured him away from the playground, tied him up and savagely beat and whipped him, fracturing several bones that would require surgery.

For most, moving on from such a spiteful attack without even a trace of resentment would be near impossible. But for the ever-humble teen, that's simply not how he was brought up.

"I don't hold onto a grudge long," Zach explained. "I'm not raised like that. I just let stuff go."

Save for a few exceptions, Zach said he hasn't really come across much racism in Whistler. He clearly loves his life here, yet he still maintains a personal connection to his homeland and speaks regularly with some of the other kids who were adopted from his orphanage. In fact, he plans to return there once he hits 18 to volunteer and give back to the place that has given him so much.

Yet for all the opportunities he's been afforded, it's Zach that has given his family the greatest gift of all over the years.

"Zach has probably opened up my heart and taught me about unconditional love more than anything else," Cathy said.

"I always tell Zach I love him to the moon and back and on every star and every piece of grass. He is so amazing. There is no way I could love him any more than I already do."

For more information, visit the Adoption Council of Canada website at www.adoption.ca.