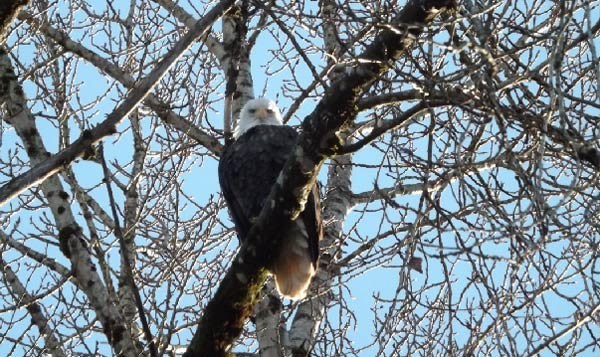 SALMON STALKER This eagle perched above the Mamquam River was just one of the 1,617 counted during the annual eagle count in Squamish on Sunday, Jan. 5. Photo by John French

Blue sky and sunshine made for ideal eagle counting conditions during the 28th annual Brackendale Eagle Count. The 2014 edition of the count produced a tally of 1,617 eagles along the banks of rivers and creeks in the Squamish area.

Over the course of Sunday, Jan. 5 a total of 41 trained volunteers started their day at 8 a.m. by gathering at the Brackendale Art Gallery, the count headquarters, to coordinate the count. By 9 a.m. all the counters were out in the field. Some counters accessed their territory by raft or kayak while most walked through their territory. The various counting territories included the Mamquam, Squamish, Ashlu and Elaho rivers along with Pilchuk and Tenderfoot Creeks.

Whistler’s Karl Ricker counted eagles from the north end of Baynes Island in Brackendale up the Squamish River. He attributed the high number of eagles counted to the abundance of salmon in the local rivers the last few weeks.

“This year we had lots of salmon,” said Ricker. “The river was choked with salmon.”

The eagles come to the Squamish area every winter to feed on salmon. Counter John Buchanan said he noticed a significant number of Coho salmon in one particular tributary of the Elaho River.

“When I hit Shovelnose Creek the numbers just exploded because of the amount of spawning Coho that are in there,” said Buchanan.

He had one of the largest territories. Buchanan started his day at 6 a.m. to walk along the shore of the Elaho counting the eagles gathered along the northern-most end of the eagle habitat. He reported back to the count headquarters at about 4 p.m. with a tally of a few less than 600 eagles.

Count host Thor Froslev, owner of the Brackendale Art Gallery, said he was very happy with the count this year, which ended with almost twice as many eagles counted in comparison to the numbers from the 2013 count.

“It’s a Sunday and it’s sunny and it’s the fifth of January and the area is packed with tourists. We had a really busy day,” said Froslev.

The last time the eagle count produced a tally greater than 1,000 birds was 2007 when counters found 1,757 eagles.

Check back on Thursday in Pique’s for more eagle count coverage in the print edition and online.