Breaking the silence of loss 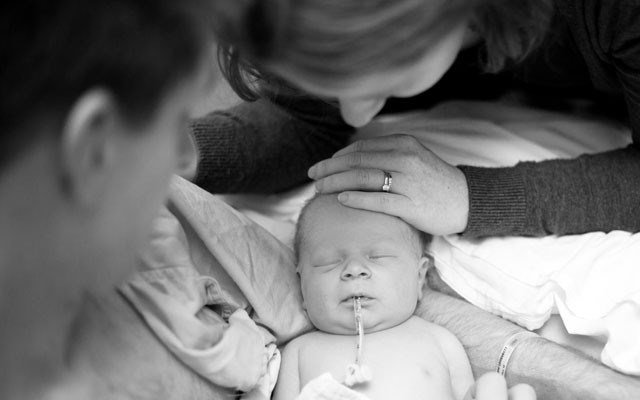 Cradled in love Owen Edmondson spends his last hours in the arms of his mum and dad. Photo submitted

Little did Robyn and Mark Edmondson understand just how fitting the name would be when they decided to name their firstborn son Owen, and just how much he would have to live up to his moniker to have five short days with his mom and dad.

"He fought to spend that time with us and to come back," said Robyn.

So to have Mayor Nancy Wilhelm-Morden read out his name in full at the March 3 council meeting — Owen Benjamin Edmondson — followed by a council proclamation recognizing Oct. 15 as "Pregnancy and Infant Loss Awareness Day" in Whistler, with the Fitzsimmons Bridge to be lit up in the campaign colours of pink and blue, was a powerful thing.

"She stopped and said his full name," said Mark Edmondson, of the validation and acknowledgement of his son, a week after the proclamation.

The young couple sat close together in the council chambers that evening, the only ones left in the audience save one or two others, nervous and yet, at peace with their decision to go public, to break the stigma and silence of pregnancy and infant loss.

"We look like a family of two when we are a family of three," said Robyn later. "And all we want is to tell people about our son."

He arrived after a textbook pregnancy throughout most of 2014.

Like all anxious parents-to-be, the Edmondsons breathed a sigh a relief at the 12-week mark — a sure and steady heartbeat, all indications pointing to a healthy baby.

Another hurdle crossed at the 24-week mark, baby boy growing perfectly in utero, 10 fingers, 10 toes, strong heart. They decided on "Owen" but they kept that a family secret between the three of them.

It was so textbook that Robyn went into labour on her due date just hours after a check-up appointment with her midwife in Vancouver. Owen's fetal heart rate was 145 at that appointment.

It had dropped to 125 that evening when Robyn and Mark checked in to a hotel opposite St. Paul's.

Around 4:30 a.m. when the midwife checked the heart rate again, it had dipped to 110 — the lower end on the healthy scale. Robyn and Mark walked across the street to check in. There were no alarm bells, no sense of urgency, no way of knowing that something may not have been right.

Minutes passed as a porter was called and helped them up to the maternity ward.

Almost as soon as Robyn was hooked up to the machines however, a Code Pink was called. Owen's heart rate was 85, the same as hers. The last thing she remembers is a mask going over her face.

About 15 minutes passed from the time Robyn was hooked up the fetal heart rate monitor to the time Owen was delivered by emergency C-section.

At some point, it's not clear when, Owen had gasped in meconium, the name for a baby's first stool, and he had been without air for a period of time.

"And that had likely caused severe brain damage," said Mark.

They cannot fault the staff at St. Paul's who they called "amazing."

Just before Owen was whisked to BC Women's Hospital for help, he passed his mom in the hallway. It was the first time Robyn laid eyes on her son, as she was being wheeled to a room. He was in an incubator, tubes in his nose and mouth keeping him alive, machines beeping, nurses and doctors on hand, ambulance waiting. Robyn didn't see any of that.

She stared at him, that same maternal stare of love and wonder and awe the world over.

And held his hand for a minute or two.

He was perfect, all seven pounds nine-and-a-half ounces of him, with little tufts of fair hair.

That first day the Edmondson's were optimistic, slowly coming to terms with the initial assessment, ready to deal with the cards life had dealt them, face the challenges ahead to help their son if he had cerebral palsy.

"We were still coming to terms with that... because of course you dream of, personally I dreamt of him watching him running around the football pitch, playing soccer," said Mark.

"And so even just coming to terms with how those expectations and dreams would change as well as how our whole life was going to change..."

Within a day it would all change again.

Ushered into a quiet bleak room the following day, a team of specialists took turns giving their assessments of Owen's medical condition after an early morning CT scan.

It was the neurologist who said that the brain scan was one of the worst-case scenarios.

They delivered their crushing recommendation — to withdraw life support.

They had three more days of loving Owen and getting to know their sensitive, wise old soul.

They took turns changing his diapers, giving him baths, holding his hand, cuddling and kissing him, and waited for an MRI scan to confirm again what doctors already knew, before they were able to say goodbye.

It was a beautiful death cradled in love under an old oak tree outside the hospital, the wind in the leaves, raindrops on his forehead. It was November 3.

Owen went back to the hospital, placed back in his room, the only place he had lived; Robyn and Mark began the long journey home.

"You never think it would happen to you," said Robyn.

"We had absolutely no idea that we wouldn't be going home with our baby."

The Edmondsons are trying to live a life in honour of Owen, discovering the beauty of the world for him, chronicling it on Robyn's Instagram account: Owen's Wonderful World.

This is their way of parenting him, they said, keeping his spirit alive, a spirit they feel around them all the time.

Then the grief rears its head in one, or some, of its many forms — in tears or anger, shame or sorrow, jealousy, fear of the future.

The grief floors you, leaves you wrecked and exhausted and despairing.

Relentless questions and what-ifs persist, despite the deep down inescapable truth that the outcome can never change.

Councillor Jack Crompton, who carried out the marriage ceremony for the Edmondson's in 2013, fought back his tears after the council proclamation.

"Just to say that we love you guys," he said. "This is hard for so many people in our community and I'm grateful that you brought it to the table."

He spoke of Owen's spirit.

"His precious life is starting this in our community."

Owen's life and death, say the Edmondsons, is not a blip in their life, an event that happened and from which to recover, a thing to pity them for temporarily.

"He is a very valued member of our family," said Robyn. "He made us parents."

Their hope is that Oct. 15 Pregnancy and Infant Loss Awareness Day will help break the stigma and silence, so that others can get understanding and support.

They know they are not alone.

Robyn added: "It's nice that Owen could do this, could help to bring this day to his community. He is a Whistlerite and wants to be a part of the community and this is how he can do it."