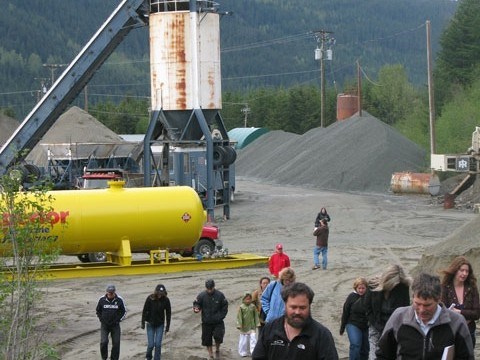 Alpine's Paving's owner has filed an affidavit in B.C. Supreme Court, which he claims shows that his company is allowed to operate on the fringe of the Cheakamus neighbourhood.

And it names former Resort Municipality of Whistler (RMOW) general manager of environmental services Brian Barnett, who was deputy municipal engineer at the time, as one of those who told him he was allowed to operate at the current location.

"On May 7, 1997, I was advised by Brian Barnett of the RMOW that the zoning for the Property permitted the manufacturing and processing of gravel and aggregate into asphalt..." states Silveri in the court document.

The affidavit was filed on July 7 as part of an action that began with the RMOW issuing a cease and desist order for the plant, which has been the subject of intense lobbying by Cheakamus residents for two years now.

The affidavit explains that Silveri first wrote to the municipality on April 12, 1997 requesting a rezoning of a property on Crown land that is licensed to Whistler Aggregates, a subsidiary of Alpine Paving, by the Province of British Columbia. He pointed out that manufacturing and processing of gravel and aggregate into asphalt would take place on the property.

Barnett's position was later strengthened by a memo from John Nelson, then the municipality's director of public works, telling then-Mayor Hugh O'Reilly that a pit area where Silveri wanted to locate the plant was zoned IP1 and included as a permitted use was, "manufacturing and processing of gravel and aggregate."

The municipality, informed of the content of this affidavit, responded by pointing Pique to a statement it issued regarding Whistler Aggregates on May 17, 2011. The last line of that statement still stands as the municipality's comment:

"The Mayor, Councillors and municipal staff may not comment publicly on this bylaw enforcement until the Court has pronounced on the matter."

Silveri goes on to state that from 1997 until April 11, 2011, the municipality "consistently and repeatedly represented" to him and the public that the manufacturing and processing of gravel and aggregate into asphalt was a lawful use of the property pursuant to the IP1 zoning bylaw.

Silveri added in his affidavit that on August 3, 2010, an administrative report from the municipality's department of planning and development services stated that when the asphalt plant moved to its current location, the W6 pit southwest of Cheakamus Crossing, the IP1 zoning bylaw, which governs processing of aggregates, was not amended to specify asphalt manufacturing and processing as a permitted use.

The affidavit goes on to outline numerous occasions when Mayor Ken Melamed and others claim that asphalt production is an allowed use of the area and that to challenge it puts the community at risk financially due to the threat of a lawsuit.

The affidavit states that on May 12, 2010 Melamed is reported to have said : "Based on what we know, we don't have the authority to compel Alpine Paving to move."

Whether IP1 zoning permits asphalt has been a matter of contention between the municipality and opponents of the plant operating in its current location, many of who are residents of the Cheakamus Crossing neighbourhood, which is located close to the plant.