Bringing grizzlies back from the brink

Sellout crowd turns out to hear about saving region's largest carnivores
Apr 14, 2014 6:00 AM By: Alison Taylor 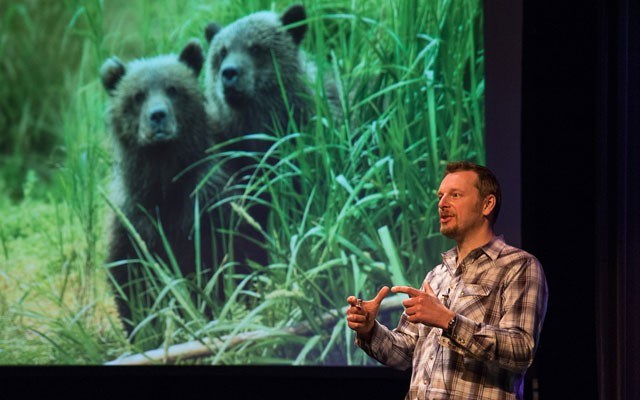 A Night with Grizzlies Ecologist Chris Morgan describes his work on bears in four continents amid the evening's wider talk about the issue of the threat of the regional extinction of grizzlies on Whistler's doorstep. Photo by Brad Kasselman/coastphoto.com

Whistler's backyard wilderness could hold the key to bringing grizzly bears off the brink of extirpation in southwestern B.C.

It's not just that this is southern most tip of grizzly habitat with a growing spotlight on the issue of local extinction; there is also a culture and a mindset here about the importance of protecting the future of these majestic animals — these keystone animals which act as a bellwether to our future.

That mindset was evident Tuesday night to the sell-out crowd during the two-and-a-half-hour presentation billed as "A Night With Grizzlies." It featured endearing ecologist Chris Morgan, provincial large carnivore specialist Tony Hamilton, and Johnny Mikes of the Coast to Cascades Grizzly Bear Initiative.

"People are grabbed by these bears," said Morgan, in his lively talk touching on his history working with bears all over the world, flashing photos of sun bears in Borneo, grizzlies in Alaska and the Spectacled Bear in Peru.

"It keeps coming back to these magic animals."

Though Morgan's work spans four continents and his captivating stories of studying bears held the room, particularly the clips from his latest project BEARTREK, the heart of the issue was in Whistler and the grizzlies on its backyard doorstep, at the very line of local extinction.

In the North Cascades there may be six grizzlies; two in Garibaldi-Pitt, in the Stein-Nahatlatch, 24; there are 59 in Squamish-Lillooet, and 203 in the South Chilcotin Ranges.

These areas are described as "threatened."

"We stand at the southern fringe in British Columbia," said Hamilton, showing a North American time-lapse map of the incredible contraction in range over the century.

It's an alarming rate of extirpation north but one Mikes said could be reversed.

He pointed to the four bears likely sleeping in their dens not more than 20 kilometres away from Whistler. There are another 20 bears likely just slowly waking up near the Upper Ryan in Pemberton.

"They really stand a good chance of recovery if we give them half a chance," said Mikes.

Connectivity, he added, is key; having linkages between the areas so that populations can grow and spill into the surrounding areas.

Hamilton, who has been involved in capturing and collaring grizzlies in the area for almost a decade, spelled it out:

"We believe that the strongest management objectives for those (grizzly bear population) units is recovery."

To do that they need four things: the biological data (they have collected a decade's worth to date), organizations supporting the cause, First Nations and public support and government programs and policies.

"We need to translate the science into an active recovery program," he said simply.

When the focus turned to the audience however, Jacqueline Hohmann couldn't help but speak out at what she felt was the proverbial grizzly bear in the room.

She had driven up from Surrey on her birthday for the evening and her passion for saving the grizzlies was evident.

"There was so much information and it was exciting to see but they didn't even address the trophy hunt," she said after the meeting, adding that she has made it a personal commitment to try to end the trophy hunt.

The spring grizzly hunt opened at the beginning of April with one of the highest numbers of hunting authorizations issued in decades at 1,800. And, said Hohmann, the government opened four new areas.

"Here we are all talking about bears and the majesty of them and how iconic they are and how we're so lucky to have them... but nobody wants to say anything about the trophy hunt that is going on right now," said Hohmann.

In fact, Mikes wrote a letter in December expressing concern from the Coast to Cascade Grizzly Bear Initiative about the trophy hunt specifically in the neighbouring Kliniklini-Homathko population unit.

In his letter, he said: "It is very important to the recovery of southwest B.C.'s five threatened GBPUs that the Klinaklini-Homathko's population level is allowed to grow and expand consistent with habitat suitability and that it can play an appropriate role in regional grizzly bear recovery."

Another audience member raised concerns about the Innergex power project in prime grizzly bear habitat in the Upper Lillooet.

In the meantime, bear scientists and champions look to the recovery efforts in Yellowstone National Park in Wyoming as a model and a hope for the future. In 1975, there were 136 grizzlies at Yellowstone. Today, there are more than 700, with the Greater Yellowstone Coalition focusing on "The Three Cs": core habitats, connectivity and conflict reduction.

For more information check out www.coasttocascades.org.