Beneath the snowcapped wall of Mount Currie, a tattered roadside sign sits on Pemberton's Portage Road between the Petro-Canada gas station and the Pony Espresso cafe. The sign isn't advertising gas prices or latte specials.
Oct 11, 2001 9:00 PM By: Greig Bethel 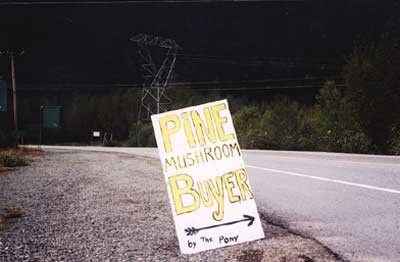 Beneath the snowcapped wall of Mount Currie, a tattered roadside sign sits on Pemberton's Portage Road between the Petro-Canada gas station and the Pony Espresso cafe.

Every fall hundreds of mushroom pickers travel to the Pemberton area in search of a fungi named matsutake – more commonly known as a pine mushroom – that grows on the mossy forest floor beneath a canopy of Douglas fir trees.

Mushroom picking, at its best, is a modern day gold rush, but it is also subject to a boom-and-bust cycle.

Pickers can make hundreds – or even thousands – of dollars for a day's work. Other days they would be better off staying at home.

Depending on condition and supply, top-grade matsutake mushrooms can pay pickers anywhere from $8 to $200 per pound and, according to one mushroom buyer, this year's annual harvest is one of the best in recent memory.

The price in Pemberton averaged around $18 this year and the bumper crop of mushrooms has been a boost for the economy, according to local business owners.

"Mushrooms bring a lot of people into the area and some of them are making pretty big bucks," said AG Foods manager Chad Lee.

According to Lee, who has worked at the Pemberton grocery store for the past 18 years, the annual mushroom harvest helps local businesses through a traditionally slow time of the year.

"It does keep things afloat between summer and winter," he said.

Petro-Canada manager Bill Auger said this year's mushroom harvest has meant an increase in his business as well.

"It appears to be a bumper crop and it's having a positive effect," he said. "There definitely seems to be more people spending money."

According to figures from the B.C. Ministry of Forests, the annual mushroom harvest brings millions of dollars into the B.C. economy. One estimate places that number as high as $20 million.

Stephan Zeglen, the MoF's mushroom expert, said Pemberton is one of the province's prime mushroom-picking areas.

"It's becoming more and more popular," he told Pique Newsmagazine in an interview from his Nanaimo office.

Zeglen said the Pemberton area is similar to another prime harvesting region, the Nass Valley in northwestern B.C.

According to MoF estimates, mushroom pickers harvested 136,000 kilograms of pine mushrooms – worth $4 million – in the Nass Valley during the fall of 1994.

Mushroom pickers are paid in cash by buyers, such as the one near the Pony Espresso, who set up temporary depots close to the harvest area.

The ’shrooms are weighed and graded by buyers and then shipped off to Japan, where a top-grade matustake are considered a delicacy and can be sold for as much as $200 per pound.

According to the federal government, Canada is the fourth leading exporter of pine mushrooms to Japan, after South Korea, North Korea and China.

But with this week's heavy rains, it looks as if the mushroom harvest and the money it brings into the local economy is finished – at least until the sign is put up again next year.