Efforts aim to pinpoint where and how life might exist on other worlds
Mar 13, 2013 9:00 PM By: Nicola Jones 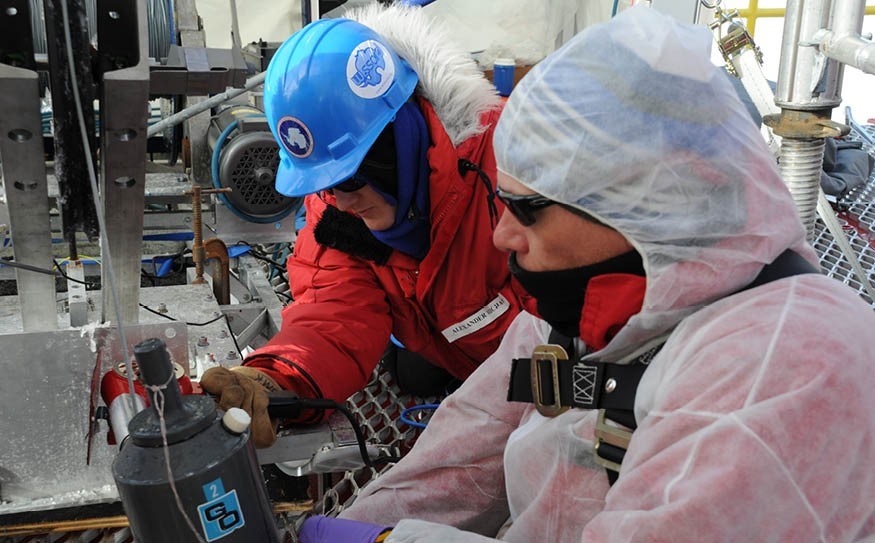 After a Russian team spent decades trying to drill through kilometres of Antarctic ice to an ancient lake buried below, an American team beat them to the punch this January by drilling down into their own subglacial lake in just four days flat. By February, the U.S. team made history by announcing that they have found bacteria living in their underground lake, despite the freezing cold, pitch dark, and lack of contact with the outside world.

The two efforts are part of many investigations into weird and ancient life living in extreme Earth environments, which help scientists to pinpoint where and how life might exist on other worlds. You don't have to go to the Antarctic to study these questions; scientists working with NASA are looking at equally odd lifeforms living in Pavilion and Kelly lakes here in B.C. But the excitement this winter has been down on the southernmost continent, as three teams raced to reach lakes that have been sealed off from the rest of the world for thousands to millions of years.

The American team met with the most resounding success. On Jan. 28, they announced that they had retrieved the first ever sample of water grabbed from a lake lying deep under an Antarctic glacier — in this case Lake Whillans, a small, 60 square-kilometre lake lying under 800 metres of ice, near the Antarctic coast south of Australia. In February they confirmed that a microscope shows bacteria thriving in the water — about 1,000 bugs per millilitre, or one tenth as much as is found in the open ocean.

The Russian team, meanwhile, spent the season working on their borehole into the much larger and deeper Lake Vostok: a 15,000 square-kilometre lake lying under four kilometres of ice. This is the first subglacial lake that researchers ever tried to drill into, and the effort has a checkered history. In the 1990s, the project started a fight between researchers who worried that the Russian team might accidentally contaminate the pristine lake with the dirty kerosene and antifreeze they were using to lubricate their drill and keep the drillhole from freezing closed. That argument put a stop to the project until a better, cleaner drilling method could be worked out. Then work stopped again when their drillbit got stuck in the ice just 100 metres shy of the lake in 2007. The team finally breached through the ice into the lake in February 2012, just a day before they had to leave their field station as the weather got too cold to safely fly out. This year they extracted a bit of frozen lakewater that had clogged up the bottom of their drillhole, which didn't seem to hold any signs of life. This month they announced they had found a new type of bacterum, though it still needs to be confirmed with further samples.

The Americans had a much easier time than the Russians both because their target lake was under less ice, and because air temperatures at their field site are much, much warmer than the freezing -55C of Vostok (Vostok holds the world record for the coldest air temperature ever recorded, at -89.2C in 1983). This allowed them to use a cleaner and faster drilling technology. Instead of a standard drill — a rotating metal drill bit that needs lubricating oils — they developed a hot-water blaster that simply melted a hole down to the lake that stayed open for 24 hours before freezing up again.

The last effort was undertaken by a British team, aiming to drill through three kilometres of ice into the 30 square-kilometre Lake Ellsworth in western Antarctica. They also planned to use a hot water drill. But a broken boiler scuppered their effort in December. The team gave up for this season and hope to try again next year.

All these projects aim to learn whether and how anything might survive in these dark, buried lakes. "They're not actually at the extremes of pressure and temperature, but they are limited in nutrients and energy. The question is how microbes make a living down there," says Mahlon Kennicutt II, a chemical oceanographer at Texas A&M University and past president of the Scientific Committee on Antarctic Research. So far scientists know of about 380 such lakes, of which Vostok is the largest. John Priscu, an ecologist at Montana State University and chief scientist of the American drilling team, calls the network of dark lakes and rivers under the Antarctic ice "our planet's largest wetland." He says he expects to find life thriving down there. If they do, it might mean that life is also possible under layers of ice on Jupiter's moon Europa or Saturn's moon Enceladus, for example.

Here in B.C, researchers interested in these questions have shone a spotlight on Pavilion and Kelly lakes, which host microbialites — stalagmite-like towers of algae. Fossils of microbialites hint that they were some of the oldest life known on Earth, thriving from 2.5 billion to 540 million years ago. Exploring how and where these formations still live today again helps researchers to focus on what to look for on other planets that might host early life. The Pavilion Lake Research Project was just granted funding from NASA's Moon Mars Analog Mission Activities programme to continue for another four years, starting in Feb 2013. The researchers plan to be back at our local lakes to do field work in 2014.