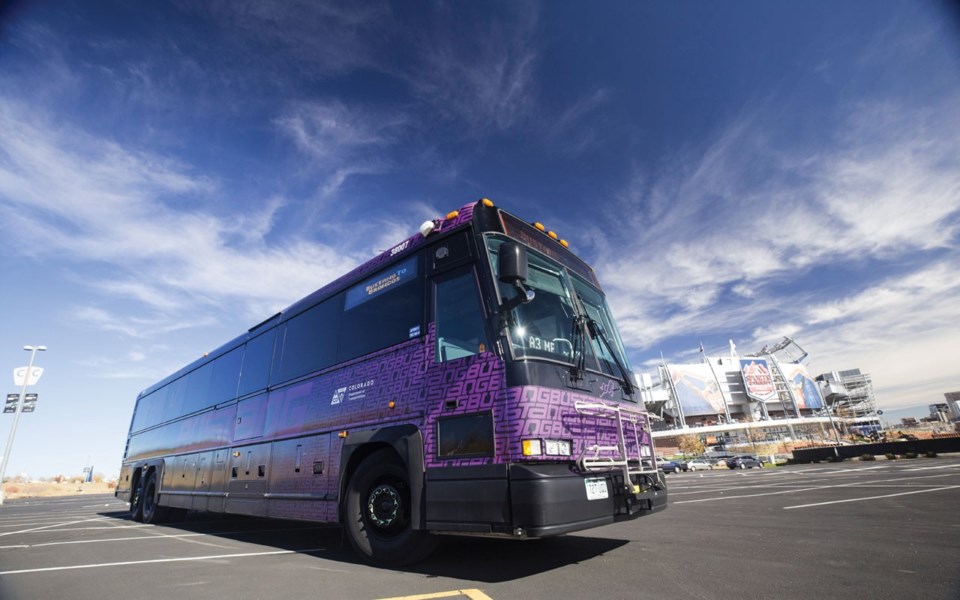 On the road Is Colorado's Bustang service a model for Sea to Sky bus travel?. PHOTO by Allen Best

As the sun dropped below Buffalo Peak last Wednesday evening, July 18, a coach-sized purple-and-black bus called Bustang drew into the station in Frisco, a town located along Interstate 70 an hour west of Denver. It's a hub for Summit County, including Breckenridge, Silverthorne and Dillon, and a jumping off place for Leadville, another mountain town just across the Continental Divide.

Six or seven people got off the bus, among them Belinda Granberg. A 25-year resident of the mountains, she teaches skiing and snowboarding at Ski Cooper. When younger, she waited tables in ski towns. "I'm fine if I never see another pastry in my life," she said.

Granberg was returning from New Hampshire, where she had spent a month visiting her 95-year-old grandmother. In previous trips to Denver International Airport, she said, she had persuaded friends to drive her. Last year, though, she found even the mid-day traffic in Denver excruciatingly slow. It was too big a favour to ask of a friend. So this year she tried Bustang. Despite some confusion in Denver, she reported, it worked well.

Bustang is Colorado's intra-state bus service. It was started by the state's transportation agency in July 2015 with the intent of linking major transportation hubs within the state. Two lines were created at the outset. The most heavily used 50-passenger buses operate north and south from Denver along the heavily populated Front Range.

The faster-growing business has been on the buses that roll up and down I-70 between Denver and the mountain towns of Frisco, Vail and Glenwood Springs. Ridership has quadrupled in the last three years.

Buoyed by this success, the state agency, called C-DOT, has been adding buses and extending routes. One new link, a smaller 35-person bus with the branding of Outrider, connects Durango and Telluride to the Bustang at Grand Junction. Another bus links Gunnison (and hence Crested Butte) to Denver. These outrider buses are subsidized by federal grants intended to benefit rural America.

Bustang was started with a US$10 million investment in state transportation funds. Since then, it continues to get US$3 million in state funds annually supplemented by US$1.5 million a year in fares paid by passengers.

Bustang fills in some of the gaps left by a receding Greyhound while employing new business models. Greyhound has brick-and-mortar investments, places where you can buy tickets and talk to an agent. Bustang relies upon cash fares paid directly to the bus driver or online. This parallels what has been happening in the airline industry.

Michael Timlin, the bus operations manager for the Colorado Department of Transportation, says bus companies began struggling in the late 1970s when the U.S. government began deregulating transportation. This led to the growth of the United Parcel Service and other freight-haulers, who took away the freight-hauling business that complemented the passenger fare-box recovery.

Early in the last decade, bus companies began springing up first in New York City and elsewhere. They picked up passengers on street corners and took them to Boston and then other cities, offering incredibly low costs.

One bus company has enjoyed success shuttling between Seattle and Portland. It doesn't stop in every town. Buses get down the highway quick—more quickly than Amtrak's Cascade, which starts at Vancouver. It's also far faster than an airplane, once you account for time going to, and sitting in, an airport.

Like British Columbia, Colorado has one metropolis and a lot of rural. The next closest major city is Salt Lake City, seven hours away.

Bustang passengers can include skiers, but that's not the intended market. David Kutsinger, director of C-DOT's Division of Transit and Rails, says charter bus companies already serve that market. To compete with them would have required investment in 30 buses while inviting questions about state-subsidized transportation competition with the private sector.

"Our transportation commission felt that was a much heavier lift, a much bigger investment. The commission advised us to start small, be successful, and serve people who live in the corridor. And then we would decide whether we want to get into the ski market."

These are not old-school buses. They're comfortable, even plush. Riders can pull down trays from the chairs in front of them, like on an airplane, and pull out their computers and go to work. All buses have WiFi and electrical outlets. The 458-horsepower engines can pull the buses up the steep grades to the Continental Divide at 65 to 70 km/hr.

Water activist Ken Neubecker has ridden on the Bustang several times between his home in Glenwood Springs and Denver. The town of 8,000, famous for its hot springs along the Colorado River, is equidistant from Aspen and Vail. Catching the 7:25 a.m. bus in Glenwood, Neubecker arrives in Denver's Union Station not quite four hours later, still early enough to conduct a half-day or more of business in Denver before catching an evening bus. It's a full day, but it beats driving, he says.

"The WiFi is a draw," says Neubecker."I can work and engage others online so long as I'm not too distracted by the scenery. The seats are comfortable and big enough to doze off in on the return trip."

But not driving alone has its rewards. "I've been going over the passes and back for decades, and with the Bustang I've seen things I never noticed before! Being higher off the road helps too, and you can actually look and examine the countryside. You can't do that when driving. I wish it had been a service when I was stuck a few years ago in winter weather and skier traffic for 10 hours. The Bustang would have made that travel nightmare a lot more pleasurable, especially with the bathroom in the back!"

Union Station, the destination of Bustang, was once and is now again a nerve centre for ground transportation in Colorado, it's a half-block to the offices of American Rivers, his employer. It's also a half-block to the corporate headquarters of Alterra Mountain Co., now the chief competitor to Vail Resorts. Amtrak and metro Denver's light-rail lines all converged here as well as regional buses. Greyhound maintains a separate bus station a few blocks away.

For many riders, cost is also a factor. For example, it's 155 kilometres between Vail and Denver. The U.S. government figures the cost at 54 cents a mile by car, or US$54. A private van company called Colorado Mountain Express, which is owned by Vail Resorts, offers door-stop shuttles between Vail and the Denver airport, but not to downtown Denver, for $84. On Bustang, it's US$17 from Vail to downtown Denver, plus US$9 more for the light-trail trip to Denver International. That's US$28 as compared to US$84 altogether. If you're over 65 years of age, it's even cheaper: US$17.25.

Cost was a factor for all three of the people I spoke to in Glenwood Springs last week. One of them, Catherine Quintana, was returning to Peru after a visit to see friends in the Aspen-Glenwood Springs area. An airport shuttle would have cost her US$120 compared to the US$37 she expected to pay. Another passenger, Michelle Rivas, a waitress in Aspen for the summer, was heading to the airport to fly to San Diego. Using Greyhound would have cost her US$50, she said.

Greyhound buses still travel between Denver and Salt Lake City, including one route that goes through Winter Park and Steamboat Springs, but they also are subsidized. But then, one way or another, all transportation is subsidized.