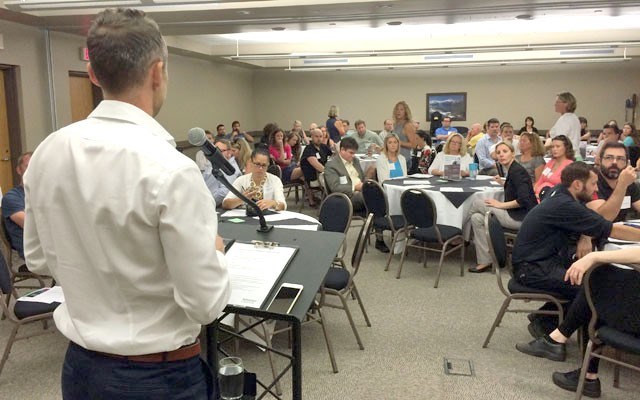 With no end in sight to Whistler's labour woes, the business community came together on Tuesday, August 18 to talk about solutions at a meeting hosted by the Whistler Chamber of Commerce.

About 100 people were in attendance for the meeting, which gave business owners a chance to talk about the impact to their businesses before attendees broke off into groups to discuss solutions.

Pepe Barajas, owner of the Mexican Corner and La Cantina, said the staff shortage has forced him to hold off on plans for expansion.

"We were in the negotiations, and unfortunately I had to withdraw my letter of intention, costing me thousands of dollars, because we were about to sign the contract," Barajas said.

"Right now I am more concerned about the fact that I want to run companies with good business values, and I am being seen by my employees as an employer that is... not treating them really good, because I cannot offer the answers."

The stories told at the meeting all shared common themes — shortened hours, decreased morale among staff, halted plans for expansion and a general feeling of uneasiness about the future.

After the brainstorming session, ideas were presented from each table concerning how to ease the pain.

From a local perspective, Whistler could improve transportation, make a better effort to recruit from First Nations and high schools, improve the housing situation and improve retention practices, attendees decided.

Highlights from the meeting will be compiled and sent out to all chamber members.

At one point, chamber CEO Val Litwin asked for a show of hands: Who in the room has had a conversation with an employee who has had difficulty finding a place to live, or who left because of the housing situation?

Nearly every hand in the room went up.

Ian Lowe, general manager of the Crystal Lodge, suggested the Resort Municipality of Whistler (RMOW) take a serious look at "sharing economy" housing from websites such as Airbnb.

Whistler Mayor Nancy Wilhelm-Morden confirmed she has asked RMOW staff to look into the issue.

"The focus and intention of this housing will be the creation of new rental units... that businesses can secure and/or lease out from the WHA for their staff."

The WHA is also in the process of analyzing the data from its annual housing needs assessment survey. The findings will be presented to Whistler council on Sept. 15.

With a federal election just around the corner, business owners can't expect any sort of timely breathing room in terms of the Temporary Foreign Worker Program.

"Basically, Whistler has operated on Australians who are willing to take a small amount of money in order to be in Whistler and go skiing. That's kind of been the business model," said Tsur Somerville, director of the Centre for Urban Economics and Real Estate at the University of British Columbia, speaking to Pique before Tuesday's meeting.

"All of a sudden, now you have to attract people who are less willing to take a low salary in order to have an extended ski vacation with work, and so that becomes a little more difficult."

Businesses will have to find a way to make Whistler as attractive as possible to potential employees, Somerville said.

"You've got to get people to go there, and their choices are working and earning income somewhere else, as opposed to 'Gee, I can go be at Whistler, ski for the year and just make enough money to cover some of my expenses,'" he said.

"The pool of Canadians who are willing to put up with low salaries to have access to skiing seems to be smaller than the pool of Australians."

Raising wages will help, but the increased cost for business owners would be passed down to consumers, Somerville said.

"They can raise wages if they raise their prices. It's not that they can't," he said.

"The way it plays out is you're paying higher wages and you're going to get higher prices for goods and services in Whistler, because you've got to pay more to be able to hire the labour. That's just kind of the way it has to go."

While a report commissioned by go2HR, B.C.'s tourism industry human resources association, predicted Whistler's current labour struggles a decade ago, CEO Arlene Keis said she's not sure it could have been prevented, short of stunting the community's growth.

"Perhaps what we could have done a better job of was preparing for it," Keis said, noting that improved transportation would help make Whistler a more attractive option to people living in outlying communities.

"Transportation and housing, that's one thing, the other is collaborating as a community, and I think that's where we were hoping to see more action — whole communities working together rather than individual employers or individual sectors working together," Keis said.