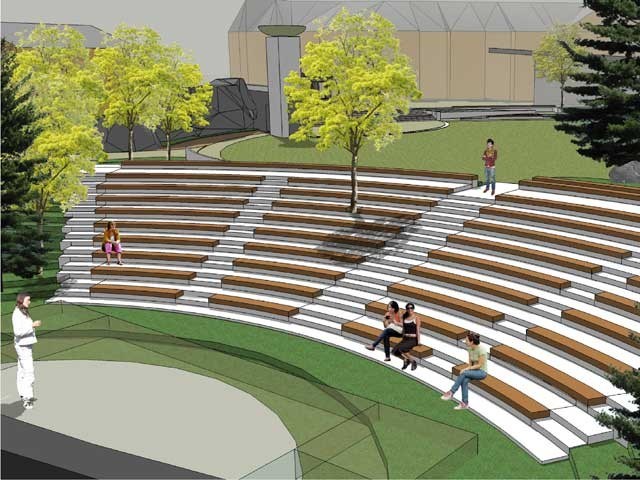 Like This But With More People Businesses and the RMOW celebrated the return of the 2010 medal presentation ceremonies to the Celebration Plaza, months after they were moved to the venues as a cost-saving measure.

The Olympic medals are back and that's welcome news for Whistler businesses.

The medal ceremonies are returning to the nightly events at Celebration Plaza after ongoing pressure from athletes, international broadcasters and the International Olympic Committee (IOC).

And everyone from hoteliers to retailers, bar owners and just regular citizens are excited about the news.

"I think it allows you to be hopeful," said Dave Davenport, owner of Skitch in Village Square.

The medals, he said, are the catalyst to bringing people to the village, to shop and dine and celebrate. And that can only help Whistler businesses.

Though he said he was excited too, Mayor Ken Melamed announced the return of the medals to Celebration Plaza with little fanfare during his Mayor's Report at Tuesday's council meeting.

When asked about his low-key comments, Melamed said:

"We're excited but it's been a wearisome process.

"It's caused a lot of stress and angst in the community."

Four months ago the rug was pulled from under Whistler's feet when the Vancouver Organizing Committee for the 2010 Winter Games announced the nightly medal ceremonies would no longer take place at Celebration Plaza and instead take place at the sports venues. This cost-cutting measure was estimated to save VANOC about $5 million.

As good partners, Whistler accepted the move, amid ripples of disappointment in the community. They were told in no uncertain terms, said Mayor Melamed, that there was no chance of getting the medals back.

Whistler's disappointment began to spread out to the wider 2010 community and VANOC began to hear concerns from athletes and then international broadcasters about moving the medal presentations from the nightly ceremonies in Whistler.

"We heard from athletes that it was really important to them," said Terry Wright, VANOC's executive vice president of services and operations.

"It was something that they felt was a special part of the Olympic Winter Games."

VANOC began to work with its partners on a solution and some creative ideas to save money. What they found in those discussions was a willingness to find compromises.

Among those cost saving measures is the plan to create a much smaller broadcast compound at the plaza.

Through discussions with the Olympic Broadcasting Services Vancouver (OBSV), VANOC will no longer build major broadcasting infrastructure at the plaza.

Instead, broadcasters will use the services at the nearby Whistler Media Centre, operating out of the conference centre.

"That was one of the most dramatic changes," said Wright Wednesday, in terms of cost savings.

The IOC also agreed to cutbacks such as no Olympic lounges at the venue and a simpler seating structure.

• $5 million from the government of Canada

• $1 million from the Resort Municipality of Whistler

Mayor Melamed made clear that the RMOW would not be spending any more money other than its initial contribution. Staff, however, will be working more closely with VANOC on the programming at the plaza.

The return of the medals brings a certain cachet to the nightly ceremonies at Celebration Plaza.

"It does to a large degree make it easier to achieve success," said the mayor.

Even those businesses not directly affected by the decision were excited about the news this week.

Lynn Gervais, public relations manager for the Fairmont Chateau Whistler, said the medals won't change things for the Chateau from a business perspective during the Games - they are already fully booked with Olympic family.

But it's the long-term implications of showing off Whistler to the world that helps businesses like the Chateau. And, she added, there's that intangible community benefit.

"I think from a community perspective it's a great opportunity for us to celebrate."