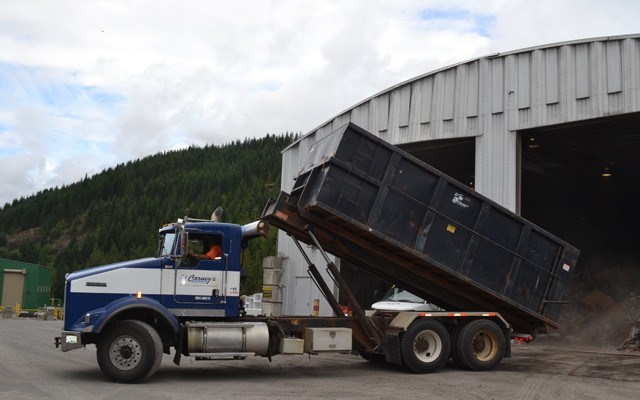 As the Resort Municipality of Whistler (RMOW) readies an update to its Solid Waste Bylaw, businesses and stratas are preparing to adapt.

As part of the update, organizations will have to separate waste into three streams: Garbage to landfill, food scraps and recyclables — though some, like Caramba Restaurant, are ahead of the curve.

"When it does come into full effect, not only are we ready to rock and roll, but it's already working properly, because of course these things always take time," said Executive Chef James Pare.

Adapting to the changes meant some reorganizing of the kitchen and designating some new bins, as well as some added costs, he said.

"It really doesn't have too much of an impact, but there is a cost associated with it... we pay more money for the disposable bags," he said.

"We're looking at that right now... we know there's going to be a cost associated with it, but it's also about doing the right thing too, considering what Whistler is all about, and what we're all about."

The biggest challenge will be in breaking old habits and educating staff, Pare added.

"It's not like you can flick a switch and then the next day everyone is recycling. It's a process," he said.

"It's about coaching and telling people and explaining to them that this is the system."

But how those fines will be levied poses another question, said Brian Reid, agent operations manager for Whistler Resort Management, which manages about 100 strata properties in Whistler.

"We would still like to see how the enforcement works, because that's one of the things our stratas are concerned about, is how are you going to point the finger at the strata corporation, knowingly, that they are the ones who are the problem?" Reid said.

"It might just entail an across-the-board increase in tipping fees, so that everybody is sharing in the costs."

There have been no refusals from strata owners to get on board with the update, and the stratas have been receptive to the changes, "but they just don't want to feel that they are being pushed into a corner or targeted for any of this," Reid said.

Many stratas have adequate space for a composting bin, "but there's a number of them that don't, and so are going to be forced to comply, and want to, but just want to make sure that they're given an opportunity to improve their shed without going to the huge expense."

The RMOW is working on a companion zoning bylaw to address some of the issues.

Initial thoughts for that bylaw include increased gross floor area exemptions for garbage rooms in buildings and allowances for parking reduction to allow space to be converted.

"If they do the allowances to give people the chance to update their facility in a feasible manner, the stratas don't have a problem with that," Reid said.

"It's when they start to force the issues and say there are 'musts' involved, and that there is extensive costs associated with this, that's when you're really going to get some pushback."

Over at the HI Hostel, the switch was made earlier this summer, said general manager Ryan Murfitt.

A cardboard bin was moved outside from the garbage room to make room for a compost bin.

"So far, the program is costing us more... the only way we're going to save money or break even is if we reduce our landfill waste pickups, so we're trying to track that," Murfitt said.

The transition itself was painless, and actually led to a change in purchasing decisions when the hostel saw how much organic waste it was producing.

"All of our shared rooms had paper towel dispensers... we actually started removing them in stages, and we put up little signage saying that we are trying to reduce our waste," Murfitt said.

"We couldn't compost those affordably. We'd have to get another two more bins, which would make this whole project extremely expensive."

The changes will mean some adjustments for all involved, but the end result is worth it, Murfitt said.

"I feel we all just need to go for it. We've got to keep this place beautiful for as long as possible," he said.

"Food waste or organic waste is a huge chunk of the waste stream, and it seems to be getting a little bit more coverage. People are talking about it more than they used to, so we definitely need to do that for Whistler. We're an outdoor paradise, right?"

Once the new bylaw is in effect, the RMOW expects that between 3,200 and 6,400 tonnes of garbage will be diverted to either food scraps or recycling every year.

The changes will lead to a reduction in both revenues and costs, with net savings to the municipal solid-waste budget estimated between $46,000 and $92,000 per year.