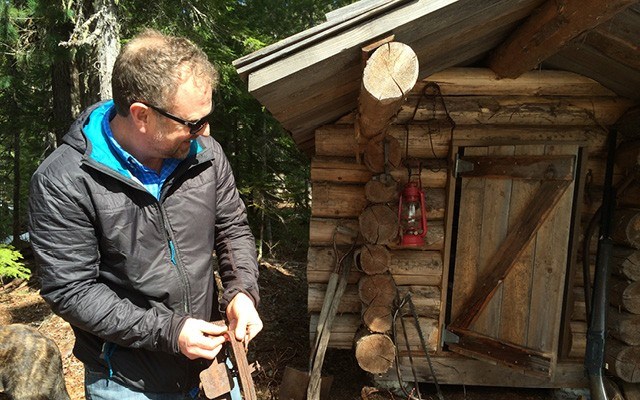 rustic retreat Allan Crawford of Canadian Wilderness Adventures shows off a replica trappers cabin on April 11. Future plans for the company's tenure include rustic cabins and an 18-room lodge, with a focus on authentic, nature-based experiences. PHOTO by braden dupuis

Since it was founded in 1993, Canadian Wilderness Adventures (CWA) has been providing visitors to Whistler with authentic Canadian experiences.

Now, the adventure tour operator hopes to expand its offerings with even more Canadiana.

"For years, people have said we're the highlight of their trip to Whistler. That gets messaged out to the world, and that's what draws people here," said Allan Crawford, co-owner and founder of CWA, during an April 11 tour of the company's operations in the Callaghan Valley.

Over the years, CWA has built its offerings in the Callaghan to include a variety of Canadian experiences — everything from snowshoeing and dogsledding to snowmobiling and canoeing — but Crawford said there's always been more to the plan.

"This is not anything like Whistler. This is like Canada used to be. It's sort of like pioneering," Crawford said, of his vision for the tenure. "My theme is Canadiana: canoes, log cabins, nature experiences and getting the feel of nature."

If all goes according to plan, CWA will add an 18-room backcountry lodge, 24 rustic rental cabins, 36 tent camping sites and a small spa, as well as a restaurant and retail space and other small supporting structures.

All of it would be built around CWA's tour offerings in the Callaghan, using minimal-impact practices designed to preserve as much of the old growth and natural feel of the area as possible.

"I can assure you that we're doing everything we can to save the environment. We've been cleaning up the mine sites, pushing off logging as hard as we can," Crawford said. "It's in our best interests to protect the environment."

It's the allure of that natural environment that Crawford hopes to leverage, and in doing so provide a unique experience not currently on offer in Whistler Village.

"To come and rent a cabin where you have to make your own wood fire is very different than somebody that wants to be in the heart of Whistler Village, with all the hustle and bustle," Crawford said.

"This is a different person. They wouldn't even come to Whistler otherwise."

As part of the new offerings, CWA is also re-engineering the HemLoft Café, a treehouse Crawford obtained in 2013 after it was removed from the Kadenwood forest.

But the HemLoft is just one piece of recycled infrastructure planned for the operation — Crawford has already procured, or is in talks to procure, several more recycled structures to be repurposed in the Callaghan.

Crawford said he hopes guests can learn something about recycling and sustainability when they stay with CWA, and take those lessons back home with them.

"The entire thing is educational," he said. "Everything we're doing we're looking at the impact, and we want to share that with the world so the world can learn a better way."

The trails were built by hand along old animal paths to avoid bulldozing and unnecessary disruption, Crawford said, adding that the same mentality has been used in all of CWA's work in the Callaghan.

"It's very small scale," he said. "I could put on a first aid course out here, rent some rooms out to 20 students, bring them out, teach the course in the mountains, do a photography course... this is tiny."

But there are some legislative hurdles to be cleared if CWA is to move ahead. The company has been operating under Temporary Use Permits for several years, and with its current agreement set to expire in 2016 is now applying for permanent zoning with the Squamish-Lillooet Regional District (SLRD).

SLRD board chair (and Whistler councillor) Jack Crompton said the proposal would likely come before the board in May, after which time it will be referred to member municipalities for comment.

The permanent zoning is a "no brainer," Crompton said, but the tourist accommodation aspects provide less certainty.

"I think that that is a longer conversation, and I'm definitely going to wait to hear the input from member municipalities and our staff at the regional board," Crompton said.

Whistler Mayor Nancy Wilhelm-Morden said it's hard to speculate on what will happen without reviewing concrete plans, but noted that the application is inconsistent with planning documents like the SLRD's Regional Growth Strategy and Area D OCP, as well as the RMOW's own OCP and Whistler 2020 document.

"Something that is unique and different is marvellous, but when you start talking about accommodation and all the affiliated uses, that's when it starts going offside what our major planning documents indicate," the mayor said.