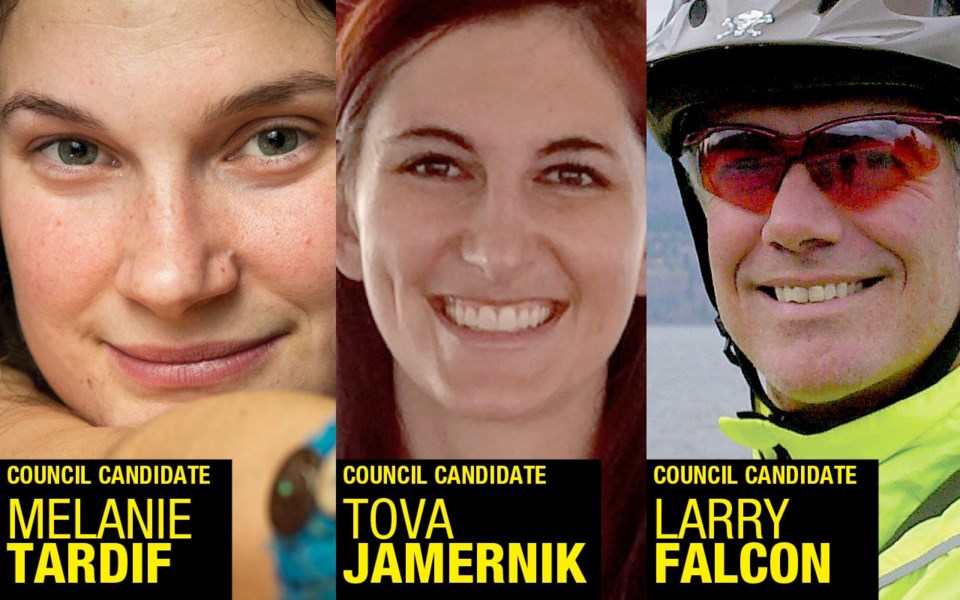 While Jack Crompton was officially declared elected by acclimation for the office of mayor by chief election officer Brooke Browning at municipal hall on Sept. 24, there are many discussions to be had before Whistler's next mayor and council are officially sworn in on Nov. 6.

Whistlerites got their first look at all 20 council candidates at the first of three all-candidates meetings on Wednesday, Sept. 26 (after Pique's weekly deadline—see www.piquenewsmagazine.com for the story), with two more to follow: Wednesday, Oct. 3 at the Maury Young Arts Centre and Tuesday, Oct. 9 at Whistler Secondary School.

Each candidate's nomination forms can be viewed at www.whistler.ca/election.

Read on for profiles of three more of the candidates (presented in the order they were reached by Pique), and check back in the coming weeks for the final three.

Ahead of their joint-hosted all-candidates meeting on Sept. 26, The Association of Whistler Area Residents for the Environment (AWARE), Whistler Community Services Society (WCSS) and Arts Whistler published the results from a comprehensive and wide-ranging survey featuring a majority of the candidates.

The results can be found at www.awarewhistler.org.

At 32 years old, Melanie Tardif stacks up as the youngest of the 20 council candidates—though you wouldn't know it looking at her volunteer work.

Tardif has been involved with AWARE since 2011, serving as president for the past three years.

She also sits on the board of the Whistler Naturalists and works with the Whistler Fisheries Stewardship Group, Whistler Blackcomb's habitat improvement team and more.

If you're noticing a trend, that's no coincidence—Tardif's passion for the environment goes back to before she graduated high school, when she told a school counsellor she just wanted to be outside.

"I'm in my element—I feel so relaxed and calm in nature, and for me it's really all about education, and spreading that love and sharing the knowledge," she said.

Tardif's conversation with her guidance counsellor led her to an ecological technology program at Vanier College in Montreal, and in 2008, to Whistler, where she now guides tours for Canadian Wilderness Adventures and teaches snowboarding.

Part of her reason for running is to see the Resort Municipality of Whistler (RMOW) follow through on its Whistler2020 guiding document.

"I'm very excited about the opportunity to be on council during the time that the Official Community Plan gets approved and passed, and to see the vision of Whistler2020 come to light, and if elected, to keep the municipal staff and council accountable to these guidelines," Tardif said.

"I want to make sure that we can respect all of the effort and time that went into it and to really see the goals and objectives come to fruition."

As for immediate changes, there are many ways that Whistler can do better for the environment, Tardif said.

"There's so many things that I feel like we've just been stalling on, like, easy, low-hanging fruit that we could have checked off a long time ago," she said.

"For one, there's not even compost bins next to garbage bins and recycling bins in Whistler, and that would segregate so much garbage, and it would actually minimize what's going to the landfill."

Another big part of her campaign is to phase out or eliminate single-use plastic.

"It's a huge concern of mine," she said.

"And looking at all of the social media really highlighting that right now ... I think that No. 1 is awareness and education, and then eventually it's changing our behaviour."

Other priorities if elected include looking at overtourism (and a carrying capacity analysis for Whistler's built infrastructure and natural ecosystems to see how much it can support), and the broader topic of general affordability.

"What happened to the whole ski bum, living in our vans community? I'd like to get back to our roots and more down to earth, and just have more employee satisfaction and a better quality of life," she said.

Finding solutions to some of the economic woes—like Whistlerites spending 30 to 50 per cent of their income on rent—begins with conversations, like those found in the Green Drinks sessions Tardif has hosted every month for six years at Black's Pub, she said.

"I really want to start to talk to more people about it, and to sort of brainstorm solutions," she said.

"And then it takes a big group of people like the municipal staff to actually go out and study and develop metrics and whatnot for us to come to a solution."

Find more on Facebook at Vote for Melanie Tardif.

Back in 2006, Tova Jamernik wrote a letter to the editor published in Pique pleading for business owners to treat workers fairly.

"Genuinely make workers feel valued and appreciated (financially and otherwise), and they will pass that on to your customers, giving Whistler the edge (that it used to have) to rise above the rest," she wrote.

A dozen years later and Jamernik is pushing a similar message in her first bid for public office.

"The big theme of (my campaign) is everything is interconnected," she said, pointing to the way a lack of stable housing can impact the wellbeing of workers, which in turn affects the health of the resort as a whole.

Addressing the dire shortage of daycare spaces (one of Jamernik's key campaign issues), for example, frees up parents to reenter the workforce.

In addressing childcare, Jamernik's plan would be to utilize lands already zoned for educational uses, like beside Myrtle Philip Community School.

"Whether it's provincially run or private run, I think the most important thing is that early childhood educators need to get paid more, because that will draw in more quality people," she said. "If I'm looking long term down the road ... I would love to see that childcare, from the age of one, if parents so choose, be a provincial mandate, and actually have well-paid early childhood educators."

On the housing file, Jamernik said she's fully supportive of "shovel-ready" projects already underway, but would like to see something bigger—like a staff housing development built above the Day Lots.

"I'm not saying that the municipality hasn't done a great job of getting things going ... but we need to plan longer, we need to plan bigger, otherwise it's just a Band-Aid, and right now we're still three to five years behind," she said.

Perhaps Jamernik's biggest campaign proposal to improve the wellbeing of locals is her idea for a special task force committee on mental health and wellness, though that's not to take away from the great work of the Whistler Community Services Society, she said.

"They're doing the best they can, and they have amazing people that work there, however, currently right now the waitlist for counselling is one month, and they're saying in the winter it's two months or more," Jamernik said.

Jamernik, 34, has been coming to Whistler for 29 years, and moved to the resort fulltime two years ago. She studied political science and commerce at the University of British Columbia, and works locally in rental management and career counselling.

Larry Falcon can't say exactly how many people he's put onto the sport of mountain biking in the 21 years he's ran the popular Monday night rides program, but it's certainly in the thousands.

Now, Falcon is launching a campaign for council in the hopes of further giving back to the place he has called home for more than two decades.

"It's time to give back. I've taken a lot and I've enjoyed it, but I think I can give back in a very positive way," he said.

"I feel that Whistler needs some very positive things to take place now rather than five or 10 years down the road. I think that we can have an impact. I believe very much in working as a team to create the results that we need."

"The soul being the energy and the buzz that the town provides—that comes from youth," Falcon said. "It's really important that we continue to ensure that youth can live and grow in town."

To do that, Whistler need to address its current housing woes, though Falcon said he doesn't call it a housing crisis, per se.

"I disagree—we don't have a housing crisis, what we do have is a staff accommodation crisis, and that's having tremendous impact on businesses, which in turn tremendously impacts customer service, which impacts our sitting as the No. 1 resort in North America," he said.

"And that's an issue that needs to be addressed today. Not five or 10 years down the road."

While he does have some specific ideas around staff accommodation, Falcon encouraged voters to come out to one of the all-candidates meetings to hear more.

To ease highway congestion, he proposes pushing the province to convert the stretch of Highway 99 between Function and Creekside to a three-lane highway, with two lanes alternating north in the morning and south in the afternoon.

"Certainly we have space on the road—as we saw during the Olympics, and even during the Ironman where we turned it into a three-lane route—to be able to accommodate it with very little changes necessary," he said.

As for environmental sustainability, Falcon said he feels strongly that the RMOW needs to immediately ban all single-use plastic.

"As the leading resort in North America, that's a no brainer from my perspective, and council has just not addressed it," he said. "It needs to be done, and it needs to be done immediately."

A campaign site was still being finalized as Pique went to press.