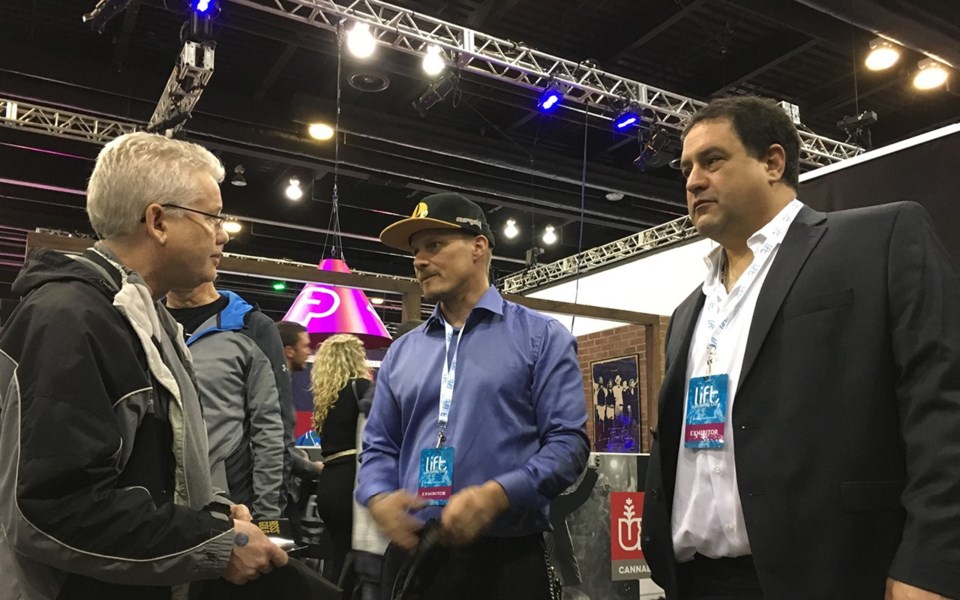 STILL WAITING Patrick Smyth (right) and Ross Rebagliati (centre) of Ross' Gold at the Lift Cannabis Expo in January. Like many others across B.C., Ross' Gold is patiently waiting for its chance to apply for a cannabis retail licence. Photo by Braden Dupuis

Canada now has an official date for cannabis legalization—Oct. 17—and the race is on for provinces and municipalities to finish their preparations.

But even with just three months before the drug becomes legal, the Resort Municipality of Whistler (RMOW) isn't ready to reveal its plan for cannabis retail in the community.

"We're waiting for all of the regulations from the province and from the feds to sort themselves out before we take any further steps, so there's nothing to report at this point," said Mayor Nancy Wilhelm-Morden.

And there has been a growing interest at municipal hall.

"Due to the high volume of inquiries from prospective retailers, the RMOW will not be granting requests for meetings, sales presentations or information sessions from representatives of the cannabis industry (e.g. retailers, producers and affiliated representatives)," the RMOW website reads.

Those interested in opening a provincially licensed retail facility in Whistler or in contributing to discussions to shape future rules related to retail are asked to email cannabis@whistler.ca.

As it stands now, there is no timeline confirmed for considering cannabis retail at the local level, but Whistlerites will be able to order weed online once it's legal this fall—Shopify Inc. has been tapped by the provincial government to provide online sales this October.

Whistlerites will also be free to grow it at home. A bylaw permitting local residents to grow up to four cannabis plants is slated for adoption at the July 24 council meeting.

Meanwhile, the provincial government has been busy behind the scenes, most recently announcing that it has entered into agreements with 31 licensed producers to ensure a retail supply when cannabis goes legal.

The Whistler Medical Marijuana Company (WMMC) was approached to be one of the suppliers.

"In terms of quantities, it's going to be a limited amount of product available initially, and then as we expand to Pemberton we can commit up to one third of our total production to the recreational market, approximately one third to our Canadian medical patients, and one third to international," said WMMC founder Chris Pelz, adding that the company's medical patients will always come first.

Having been in operation in Whistler since 2014, the WMMC was well positioned to step up.

"And I think first to market will have a substantial advantage going forward."

The sluggish pace of cannabis legalization—both locally and at the provincial and federal levels—has been frustrating for those looking to get their foot in the door.

Ross' Gold, a locally based international brand of cannabis products, would love to open up retail shops in B.C., but the province hasn't opened up the application process yet, said co-founder Patrick Smyth.

"They haven't actually figured out the application process. They're the only province that hasn't," Smyth said.

The indication to this point has been that municipalities will have ample control over retail in their communities (The City of West Vancouver became the latest to prohibit cannabis retail on July 16), which is concerning for some retailers.

"If municipalities overburden retail stores with licenses and fees, it's not going to break the black market," Smyth said, noting that excessive taxes and fees will lead to an inferior product in stores, pushing existing users back to the street.

"Eventually the street will have a slow, painful death as new cannabis users emerge ... you want to be able to know if your stuff is tested, and where it's coming from, and you want to be able to take it back," Smyth said. "If you look at it from that perspective, we'll get there—it's just going to be extremely slow the way things are going."