Police Briefs: Cyclist injured in collision; Richmond motorcyclist airlifted to hospital
May 27, 2020 5:40 AM By: Brandon Barrett 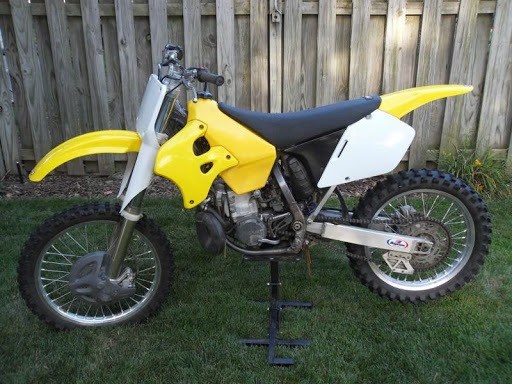 A photo of a Suzuki dirt bike model Mounties say was used to flee Whistler police on Saturday, May 23. Investigators are asking anyone with information on the incident or driver to contact the Whistler RCMP detachment. Photo courtesy of Whistler RCMP

Whistler RCMP is on the lookout for a motorcyclist who managed to evade police, who were pursuing the man after he was seen driving without a licence plate.

At about 7:30 p.m. on Saturday, May 23, police observed the motorcycle without a licence plate on Mons Road. Mounties tried to stop the man, who then “proceeded to drive in a dangerous manner to avoid being stopped,” police said, “including driving into Spruce Grove Park and on the Valley Trail, northbound, towards the Nicklaus North area.”

Officers did not pursue the vehicle and are now hoping to identify the driver and motorcycle involved “in this careless and dangerous behaviour,” police said.

The driver is described as being between 20 and 40 years old, and was wearing grey clothing and a grey motocross helmet with transparent goggles at the time.

The motorcycle is described as a yellow and white Suzuki dirt bike.

A Whistler man was seriously injured last week after colliding with a vehicle near Function Junction, police said in a release.

At approximately 11 a.m. last Tuesday, May 19, Whistler RCMP responded to a report of an accident involving an orange Toyota Tacoma and the cyclist. Investigators learned that the Tacoma was travelling south on Highway 99 when the eastbound cyclist coming out of Function made a left-hand turn at the same time.

Police said the cyclist was seriously injured and subsequently air-lifted to a Lower Mainland hospital. His injuries are not considered life-threatening at this time.

Mounties continue to investigate the crash and ask anyone with information who has not already spoken to police to contact the detachment at 604-932-3044, or Sea to Sky Crime Stoppers at 1-800-222-8477 to remain anonymous.

A Richmond man was seriously injured after crashing his motorcycle in Pemberton last week, police said.

At roughly 6:30 p.m. on Saturday, May 23, Pemberton RCMP responded to a single-vehicle accident at the Vanhorlick Creek Bridge off Highway 99. Investigators learned that while travelling south, the motorcyclist entered into a sharp corner and “potentially struck some road debris believed to be a stick or branch,” before losing control of the bike, police said.

The 36-year-old driver sustained serious but not life-threatening injuries and was airlifted to a Lower Mainland hospital.

If anyone has further information on the accident or remembers seeing the motorcycle, they are asked to contact the Pemberton RCMP at 604-894-6634, or Sea to Sky Crime Stoppers at 1-800-222-8477 to remain anonymous.

A Mount Currie woman had her licence suspended and vehicle impounded this week after she was involved in a single-vehicle accident while impaired in Pemberton, police said.

At about 9:15 a.m. on Sunday, May 24, Pemberton RCMP were advised that an accident had taken place on Pemberton Portage Road, near the Owl Creek Forest Service Road. Police learned that, while travelling eastbound, the black 2018 Silverado pickup truck veered right off the roadway before hitting a hydro pole and coming to rest in a ditch.

Investigators determined that the 49-year-old driver was not seriously injured, but was under the influence of alcohol while operating the vehicle. Her licence was suspended for 90 days and her truck impounded for a month, police said.