Past presidents, members and volunteers gather to share three decades of stories
Apr 25, 2019 12:00 AM By: Braden Dupuis 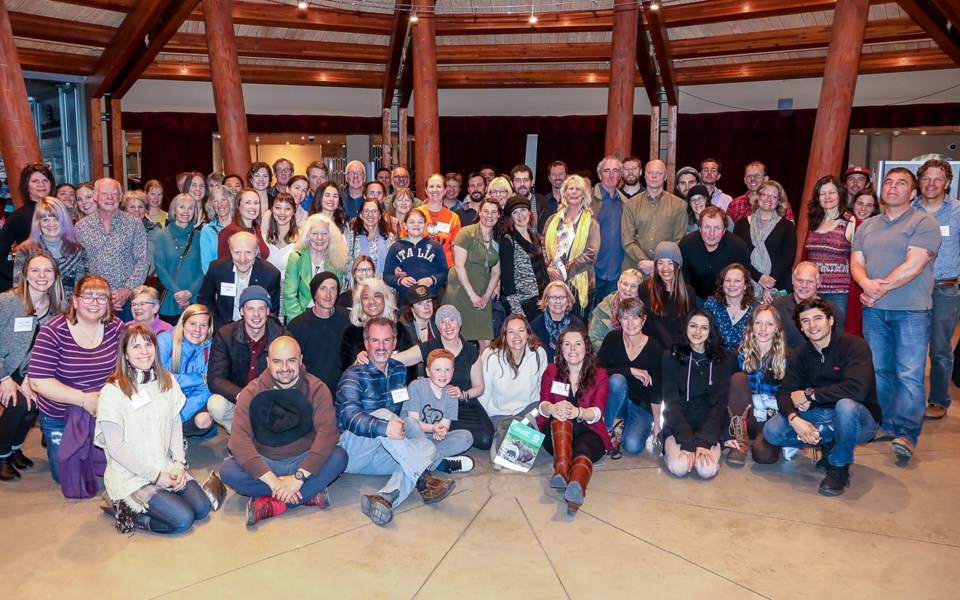 GOING STRONG Past presidents, members and volunteers of the Association of Whistler Area Residents for the Environment pose for a group photo at an event celebrating AWARE's 30th anniversary. Photo by Brad Kasselman / Coast Mountain Photography

By the time the 2010 Olympic Winter Games had come and gone from Whistler, those involved with the Association of Whistler Area Residents for the Environment (AWARE) were completely burned out.

"I think it was maybe one year after the Games ... we put a call out saying 'This is going to be the end of AWARE,'" recalled past president Sara Jennings, at an event celebrating the environmental charity's 30th anniversary at the Squamish Lil'wat Cultural Centre on April 22.

"So we put a call out to the community saying, 'If people don't step forward, we're going to die,' and thankfully, people like you guys today recognized that AWARE was an important organization that needed to continue, and people did step forward."

In its 30th year, AWARE is going strong, evidenced in part by the close to 100 people that came out to celebrate its many noteworthy achievements over the years.

Former Whistler Mayor Ken Melamed was on AWARE's founding board of directors and became president in 1990.

"The issue that we all got together on was to start recycling here in Whistler," Melamed said.

"There was nothing ... we organized the first volunteer recycling drop-off days. We did one on Earth Day, right in front of the conference centre."

Soon AWARE was coordinating weekly recycling drop-offs at the old Rainbow site, which got a "very strong response" from the community, and the group began to evolve.

"We quickly shifted into land-use and development, and saving wetlands," Melamed said, which eventually led to "the biggest battle and the longest public hearing in Whistler's history," regarding development of the Nicklaus North golf course.

"I think it was about seven or eight hours of public hearing. Pretty much everybody who lived here spoke," Melamed said to laughs from the crowd, adding that AWARE ultimately lost that fight by a vote of 7 to 0.

"It was really, really heartbreaking," he said.

During this time, AWARE burgeoned into the largest community group in Whistler, Melamed added.

"It was all about development here, and the late '80s, early '90s was about Whistler's community finding its voice, but we were persona non grata at municipal hall," he said.

"In fact, the mayor, in the early '90s, forbade municipal employees from becoming members of AWARE. They could be disciplined for such."

But the group "changed the course of Whistler's history" when Hugh O'Reilly—council's AWARE representative at the time—became mayor.

"We knew he was going to take action on behalf of the environment, and he did," Melamed said.

"Naturally there was a lot of things going on in Whistler at the time. We had a very pro-business provincial government in the Liberals, and we had this steaming, out-of-control freight train called the Winter Olympics, " Kasselman recalled.

That freight train would provide Kasselman a demonstration in AWARE's influence when, as the "public face of the environmental discussion" leading up to the Games, his business partners received a call from the Vancouver Organizing Committee.

"(They) suggested that my business would not be successful in bidding on Olympic business because of my activism with AWARE at the time, and obviously this came as a real shock to me," Kasselman said, though the pressure didn't slow him down. "In the end it all worked out OK, but it made me think, 'Wow, this little volunteer grassroots organization was really an organization that could, and was, and was doing great work throughout the Olympic development period," he said.

"I think, for lack of better terms, (AWARE) made a very gargantuan development effort a little bit less destructive than it might have been otherwise."

It was also around this time that AWARE had the benefit of being the charity recipient of local food-and-drink festival Cornucopia, which "led to a very wonderful thing, which I would call our crowning achievement over those years, in the form of funding a conservation constituent at the table of the 2004 to 2009 (Land Resource Management Plan)," Kasselman added.

Johnny Mikes was hired to fill the role, negotiating for a 25-per-cent increase in protected areas in the LRMP.

"It resulted in this incredible legacy of lands, including the Upper Elaho, the Upper Soo, and the Upper Callaghan," Kasselman said.

"These are areas that are no longer in the industrial land base, and it all started with the AWARE board of that time, of those years, and that amazing effort at Cornucopia to raise funds."

When AWARE found itself out of steam following the Games, the Community Foundation of Whistler stepped up to help pay for the organization's first executive director, Claire Ruddy.

"When we think about AWARE's past three decades, what often stands out are the tangible challenges that many of you faced, like pushing back on development, starting recycling, safeguarding wetland corridors, the Emerald Forest," Ruddy said.

"As we look to the future, things seem a little bit more abstract, but no less important. Climate change, biodiversity loss, changes in backcountry use, growing visitation, changes in the way that we value and respect wilderness ... our role (is) as important as in the past as we move into the future."

Head to www.awarewhistler.org for more.