Whistler Mountain Ski Club alumni toast their legacy on the mountains
Dec 19, 2008 6:43 AM By: Claire Piech 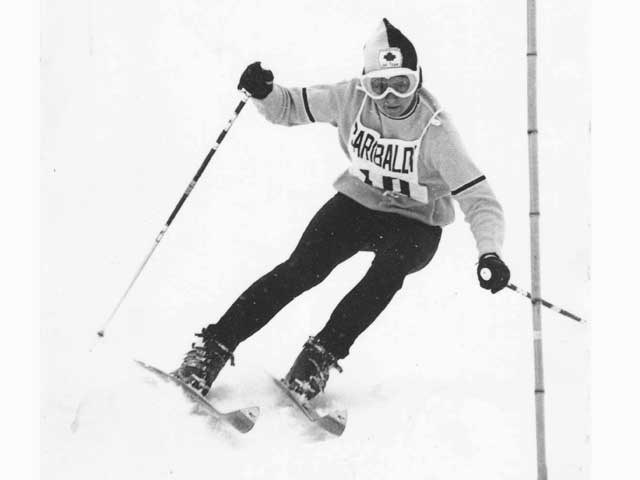 The Frosty Days of Yore It's been decades, but the original downhill races of the '60s and the '70s still hold strong in the minds of some locals. Photo submitted by Chris Leighton

Chris Leighton’s all-time favourite memory with the Whistler Mountain Ski Club goes back to the original downhill races of the late 1960s and early ’70s.

“It was just crazy,” laughed Leighton, one of the club’s original kids and daughter of Bob Parsons, who played an instrumental role in the early days of Whistler ski racing.

“There was no netting back then. If you crashed and fell, you just hoped the kids behind you didn’t run into you.”

The Back Bowl downhill race began at the top of Whistler Mountain’s T-bars, descending Harmony Bowl and what is now known as G.S. run.

The bigger downhill was on what is now the Dave Murray course. But this was before the Orange chair existed, and racers would have to hike uphill through the snow to get to the starting area. A volunteer at the bottom would time racers using a stopwatch.

Forty years later the ski club — and Whistler — have morphed with the times.

Million-dollar houses now cover the last leg of the original downhill course, just above Creekside. State-of-the-art grooming machines have taken the place of kids and parents prepping and packing the snow by hand. And skiers now have more control while zooming down icy courses with their deep-side cut skis.

Still, while things may have gotten fancier, WMSC members still boast the same camaraderie of spirit that buzzed so strong in the early days. And in tribute to the past 40 years, the thick network of volunteers and alumni are throwing a party Saturday, Dec. 20, to toast their heritage.

Sonny O’Sullivan, the first president, is even coming from Vancouver Island to see the old gang again.

“We all made our best friends — both the kids and the adults — through the club, and that was partly why I wanted to do this,” said Lynne Hume, who was the one that dreamed up the birthday fete. Hume’s two kids skied with the club before moving on to the national team.

The history of the club, which hosts regional, national and international alpine ski races, goes back to 1968, just two years after Whistler Mountain opened for recreational skiing.

A Hungarian man named Joe Czismazia got a group of 12 kids together to train for alpine ski racing and started entering them into races held on Mount Seymour, in North Vancouver.

To officially compete, the kids needed to be members of a recognized club. They skated by on the name Garibaldi Olympic Development Association for a few years, but eventually landed on the permanent title of Whistler Mountain Ski Club.

The first Garibaldi Spring Slalom was held on Whistler Mountain in the spring of 1968 and got 105 people to partake, including racers from Vernon and Mount Baker. The race was pulled off with the knowledge of Walter and Lucy Sakoloff, long-time members of the Mount Seymour Club, who were familiar with organized races.

The next year, in 1969, the rookie club hosted the Canadian championships, which established the standards still used for Whistler World Cup today. The safety system, though, was slightly more rugged: 60 bales of hay were brought in, to build up the start, protect the timing eyes at the finish, and provide spectators with seats. The whole thing cost $28,000.

While many people were involved in developing the club over the years, perhaps one of the best remembered was Parsons, who got youngsters organized in downhill camps and also established the original team of Weasel Workers for course preparation.

“My dad didn’t work in the winter. He would always go on the road with us, and he would always help at races and that kind of stuff,” said Leighton.

“The Parsons race that we now put on, we do that in memory of my father. That is the evolution of the old Back Bowl downhill. It just got renamed to the Parsons Memorial.

“It is a great event for the kids because it is the racers first real chance to go fast where it is safe. Generally they start off a little apprehensive, and then after three days they are just trying to go faster and faster, which is what you love to see.”

The first winner of the Bob Parsons Memorial Downhill, in 1980, was his son, and Leighton’s brother, Jim Parsons.

As the years progressed, the club grew in scope and size, but the volunteer group of Weasel Workers still exists today and has become notorious for their skill in preparing courses.

Led by Owen Carney, the group has helped out with World Cup races in B.C., Alberta and the United States, as well as FIS Alpine World Championships in Spain and Italy and the Winter Olympic Games in Calgary and Salt Lake City.

Another pivotal moment in the club’s history was in 1999 when the Blackcomb Ski and Snowboard Club joined WMSC.

From his cell phone at the bottom of Creekside Gondola the day the Peak 2 Peak opened, John Rhea, who has been involved with the club for 15 years and is a Weasel Worker himself, marveled at the club’s heritage and the hundreds of people that have made the club what it is.

“The fraternity of friendship that evolves from the Whistler Mountain Ski Club is second to none,” said Rhea.

“From our first club president, Sonny O’Sullivan, to our current president Dave Newton, the club has seen an incredible group of people go through it and become lifelong friends that really have been very involved.”

While the WMSC remains strong, the world of ski racing is changing.

“It is definitely harder to attract kids into ski racing now-a-days, because there are so many options out there for kids in sports,” said Leighton.

“Back in the day, if your parents skied, you skied, and you had to come along. Ski racing was just an organized sport that was easy to get into, and it was a lot of fun.

“How has it evolved? Well, it is still a lot of fun. It is just a lot more serious, and it is a lot more money.”