Cabins were integral to developing mountaineering in the corridor
Nov 16, 2018 6:00 AM By: Joel Barde 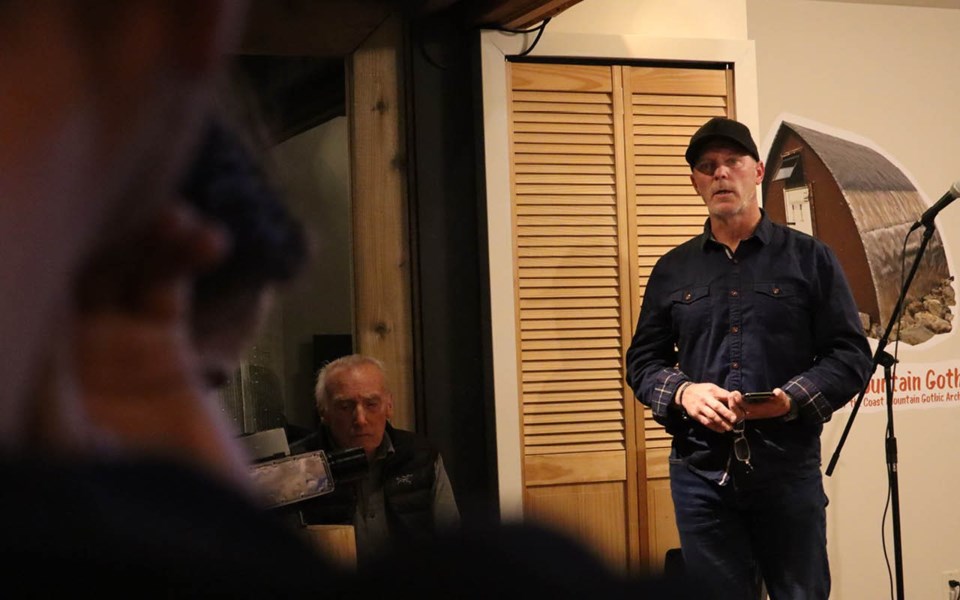 Talking huts Jayson Faulkner, chair of the Spearhead Huts Society, discusses the future of backcountry huts at a Nov. 2 talk at the Whistler Museum. Photo by Joel Barde

A large group recently filled the Whistler Museum in celebration of the Sea to Sky corridor's legacy of mountaineering and backcountry huts.

Full of plenty of laughs, the night featured short talks by Karl Ricker, Werner Himmelsbach and Jayson Faulkner—all of whom have been instrumental in developing the corridor's backcountry hut infrastructure.

The Nov. 2 evening event also served as the grand opening of a new temporary exhibit at the museum.

The Coast Mountain Gothic exhibit is a physical manifestation of a new in-depth online exhibit, which can easily be accessed from the comfort of your home, providing a good history of mountaineering in the region as well as plenty of cool archival photos to look at.

Created by Alexander with support of the Virtual Museum of Canada, the online exhibit—titled Coast Mountain Gothic: A History of the Coast Mountain Gothic Arch Huts—is a deep dive into how one particular style of hut (Gothic-arch) caught fire in the region, becoming the go-go style for backcountry builders.

First embraced by members of the British Columbia Mountaineering Club (BCMC) in the mid-1960s, the design—think A-frame, but with a curved roof rather than a triangular one—was seen as an efficient way to build in the Coast Mountains.

Beginning in the late 1960s, other clubs began replicating the design, and over the next 50 years, 20 such structures were built in the region.

A member of the British Columbia Mountaineering Club, Himmelsbach was involved in the construction B.C.'s first Gothic-arch hut, which was built in the Chilliwack area.

He went on to contribute his expertise to other BCMC builds.

"He was the carpenter that laminated all of the beams that have been used in all of the huts the BCMC (built), except the latest two," said Alexander.

The design was subsequently embraced by the University of British Columbia Varsity Outdoor Club (VOC) as well as the Whistler chapter of the Alpine Club of Canada.

"I think partly why the design took off was because it was a simple design that was tested and could hold the snow load of the Coast Mountains and also withstand the gale-force winds," explained Alexander.

Faulkner also reflected on this aspect of the huts.

"They allowed an inexpensive, modular form of design, that could withstand the incredibly harsh conditions of the heavy snow loads and the wind and all the rest of it," he said.

Alexander said that in putting together the project, he was amazed at the sheer dedication of everyone involved in hut construction in the 1960s, '70s, and '80s.

They were "trying to build these huts at low cost, because they are financed by clubs based on members and volunteers," he explained.

"It's not as though these huts are financed by large corporations."

Ricker—who along with three other VOC members was among the first to complete the iconic horseshoe-shaped loop around the Fitzsimmons Valley now known as the Spearhead Traverse—said that the Gothic-arch design was much more practical than A-frame construction. "The arch gave you a bit of an expanded arch to work with," he said.

"You could put stuff along the walls more easily. With an A-frame, you're always caught with a triangle of no use."

During his remarks, Faulkner also gave a progress report on the multi-million dollar Kees and Claire Hut, which is being built near Russet Lake, just up the hill from the Himmelsbach Hut, a Gothic-arch hut (named after Werner) that was completed in 1968 and is still in use.

For Faulkner and others, Gothic-arch huts deserve the attention they're finally getting.

"This was an area of early mountaineering and backcountry touring, where you had a really active community building infrastructure for people to get out into the alpine," he said.

"It's part of outdoor heritage, and it is part of Whistler's history."

Coast Mountain Gothic temporary exhibit is running until the end of December.