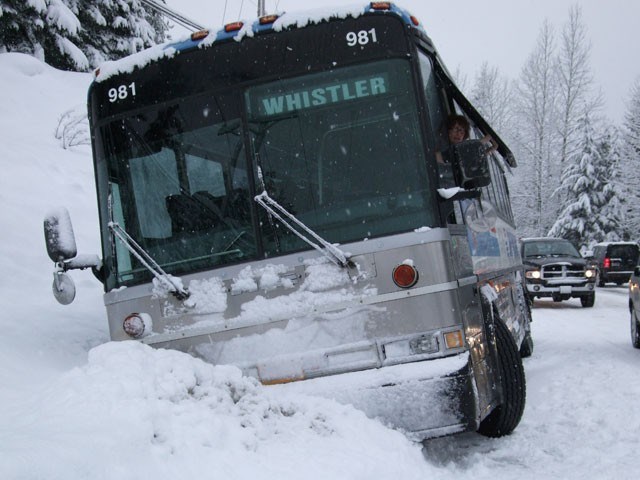 Slow Going A Greyhound bus slides into a ditch on Highway 99 - one of several factors that played a role in the lengthy delays on Sunday Jan. 6. Photo by Andy Dittrich/Insight-Photography.com.

Everyone involved in keeping Highway 99 open was asking questions this week and meeting after the road became a parking lot between Creekside and Function Junction last Sunday for more than four hours.

“It is probably the most important thing I am dealing with right now and we have to resolve it,” said Joan McIntyre, MLA for West Vancouver-Garibaldi.

The highway became gridlocked on Sunday afternoon thanks to all the usual suspects — it was snowing heavily, thousands of people were leaving the resort after skiing all day at the end of the holiday season, and a bus with no snow tires slid out of control on the road blocking traffic and snow plows.

The level of concern was so high that Ministry of Transportation officials came to Whistler Tuesday to meet with other stakeholders, including the RCMP, road contractors, Whistler-Blackcomb and the RMOW.

All are working on a protocol to prevent it from happening again but for now some changes were introduced including:

• direct radio contact between RCMP cruisers and plows so that the snow machines can be escorted to trouble spots and be alerted to them.

• RCMP and others were informed that it is Mainroad Contracting which takes care of the highway from Function Junction north. Confusion over this resulted in officers calling Miller Capilano Maintenance Corp., which looks after the highway south of Function Junction, on Sunday for help instead of Mainroad.

• direct and regular contact between road contractors and Whistler-Blackcomb so that plows know how many people to prepare the roads for.

• the light sequence at Creekside will be investigated to see if it can be tweaked to help smooth the flow of traffic.

• The RMOW is looking into providing staff to help direct traffic when needed so that RCMP officers are freed up. Whistler-Blackcomb is also looking at increasing the number of flagging staff and how they direct traffic.

“Everyone came to the table to find solutions,” said RCMP Sgt. Steve Wright of the Sea to Sky Policing Services.

“It is an on-going issue that we are continuing to improve on especially with the 2010 (Winter Olympic Games) pressures coming up. This is not a science. Every snowfall is a unique situation and it calls for creative thinking.”

The same scenario happened at least once last season in Whistler, and more than once on the highway to Squamish.

“We are in a mountain ski resort for Pete’s sake,” said Whistler Councillor Nancy Wilhelm-Morden who raised the issue at the regular council meeting Monday night.

Wilhelm-Morden plans on continuing discussions with the province and other stakeholders to try and ensure the situation is not repeated.

“There was a loud enough chorus of complaints yesterday that I would be astounded if we don’t see improvements,” she said.

Wilhelm-Morden was also concerned about the impact the gridlock had on the local transit system. With buses caught up in the jam movement of people out of the village became impossible.

“There was a significant personal safety issue because all of these people who were relying on the bus system to get them out of the village were walking along the highway in ski boots and so on,” she said, adding that she wants to see a plan in place to make sure this doesn’t happen again.

WAVE manager Scott Burley said the bus drivers do monitor the highway situations and keep in touch by radio and they modify their routes according to conditions where they can.

“But we were pretty much shut down because the traffic was at a standstill in the village,” he said, adding that many of the problems the bus drivers see on the roads wouldn’t happen if people had snow tires.

“I have absolutely no tolerance for cars or commercial vehicles that are not properly equipped,” she said.

“There is no excuse for any bus or any commercial vehicle that (drives) that highway not to be properly equipped and I am going to do my best to make sure there are strict consequences — and not just that they are turned around, but that there are fines and those operators know that we mean business.”

Currently under the Motor Vehicle Act regulations, car drivers must have all season tires with a tread at least 3.5mm thick, or snow tires, once they are past highway warning signs at Squamish. If they don’t they can be turned back by police and/or fined $109.

Commercial vehicles are monitored under the Ministry of Transportation’s enforcement branch.

McIntyre is also in discussions with MOT staff about making car rental agencies provide snow tires, or chains, or both for visitors who rent cars to come to Whistler.

There’s no doubt that hundreds of cars on the road on Sunday were rental vehicles with no snow tires and in all likelihood drivers with little experience coping in the snow.

“This is something I am working on personally,” she said.

“…I am prepared to do whatever I can on this issue. We don’t invite the world here and then not equip them.”

It’s a situation that also adds to the challenges of keeping the roads clear.

“It is very, very frustrating,” said David Zerr, the president and CEO of Mainroad Contracting, adding that once those vehicles are in trouble his plows can get stuck in the gridlock while falling snow accumulates.

Zerr said Mainroad is planning to do everything it can to prevent another “Sunday.”

“We take this very seriously,” he said. “We want to work really hard to make sure this doesn’t happen again.”

Zerr said the company was prepared for the weather and the traffic on Sunday. It had four trucks deployed, had already salted the road in preparation for heavy traffic and staff were monitoring the weather. But once ill-equipped vehicles went off the road plows weren’t getting called or escorted to trouble spots and the situation just escalated.

“I will be sending a report to (Minister of Transportation Kevin) Falcon,” said Zerr.

“Nobody wants to be viewed negatively.”

Contractors working for the government must meet performance standards. There are guidelines around their response to weather events and if the company doesn’t meet the performance targets there are financial consequences.

Emergency response vehicles, such as tow trucks, will also be brought into the discussions as they continue.