Changing the view at the mayor's office 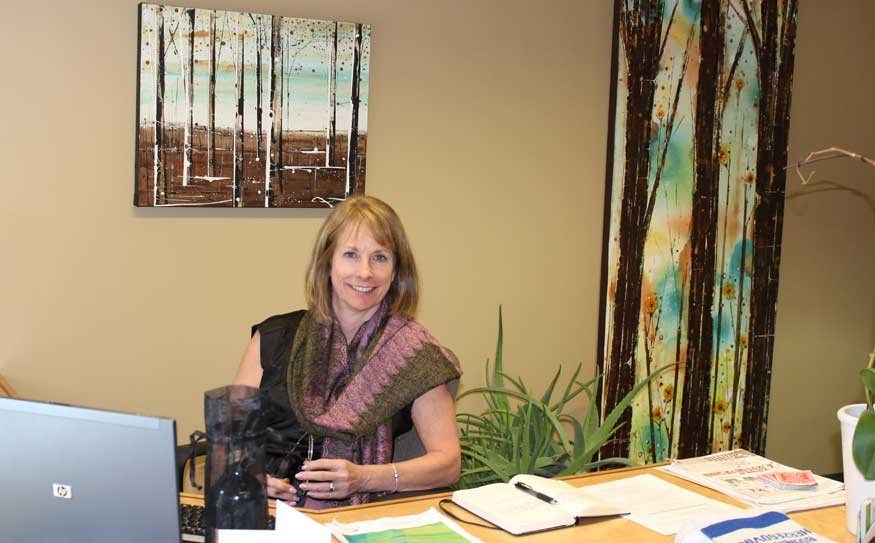 Change of style Mayor Nancy Wilhelm-Morden is starting to feel at home in her new office, and in her new role. Since being sworn in four months ago, she has tried to put her stamp on both. Photo by Alison Taylor

There's a new view from the mayor's office.

The mayor's L-shape desk, once wedged into a corner of the office facing the clinical green walls, is now on the far side of the room facing outwards.

It offers Nancy Wilhelm-Morden a view out of the windows at the hall, out into the community at large, while she settles down to the business of mayor.

The added bonus is that staff members or councillors can come into her office and easily pull up a chair on the other side of her desk to discuss business.

Looking outwards while working within.

"I want to be facing outwards," says the mayor, happy to talk about the changes she's made to the office since being sworn-in almost four months ago.

In that time she has created an intimate and elegant space that gives more insight into the woman who swept into power in November's election.

It feels warm and welcoming. But with the mayor's personal stamp in every corner, there is little doubt that this is her domain, where she is in charge.

The walls have been changed from green — again chosen by the former mayor because it's a colour that builds consensus, something that became more and more difficult as his second term wore on — to a muted brown.

On the back wall two striking pieces of art set the tone — calm and confident.

The larger piece is an imposing 76 inches by 34 inches called 'August' — big towering trees that convey a sense of serenity. The smaller piece is 'Woodland.'

The artist is a personal favourite and local — Tassila Elizabeth Speer, known as 'Tass'.

Some of Speer's work hangs at Race and Co. a five-minute walk away. It's the mayor's other home away from home where she is still actively taking on cases as a personal injury lawyer.

Wilhelm-Morden plans to rotate the artwork in her office, showcasing local artists every six months or so. It's no secret that she's an advocate of local arts and culture, taking a seat on the board of the Whistler Arts Council in June.

These particular pieces are on loan.

"Mind you, I like those pieces so much, it'll be really hard to let them go," she muses, gazing upon her back wall.

It's not the only homage to local artists in her room — her cardholder is hand-made, picked up at the Made in Whistler Artisan Market, which runs throughout the winter at the Westin Resort and Spa. Another hand-made paper flowerpot sits at the working table in her office. It's next to a little dish of chocolates to tempt any wayward staffer or councillor.

This is where the mayor prefers to meet. It's her home turf, and there are stories behind many of her personal touches.

A large homemade thank you card sits on the edge of her desk. It's from the pre-kindergarten class who came to visit and learn about what it's like to be mayor.

Was she always destined to be at the helm, even after one failed but agonizingly close run at mayor years ago?

Whatever the case, she's at home now. Here. In her new office.

She got rid of the large wall cabinets which Melamed used to display official gifts to the mayor, and replaced them with her own style.

Wanting to keep costs to the taxpayer to what she calls "a dull roar", Wilhelm-Morden brought in a rug to cover the aged carpeting. A tasteful chair with a table and a lamp give an air of coziness, stark contrast to the austerity of past.

A framed photo sits on the table — a woman fishing opening a "can of worms." It's how the mayor felt when she first took office. There were so many things community members wanted her to look at — pay parking, a university, municipal project costs, illegal space. Starting to ask probing questions about those things was like opening a can of worms — more questions, more problems to solve.

The photo was a gift from a community member after November's election.

Beside it is another gift from fellow mayoral candidate Shane Bennett. This time a book — 'The Art of War.' It's one of the oldest books on military strategy in the world, written by high-ranking Chinese general Sun Tzu.

While it may have felt like war on some of those past councils, documented in four small-framed photos on the wall, Wilhelm-Morden's changing hair marking the changing decades, not so this time around. Four months in and the mayor has nothing but praise for her team — everyone's interested, everyone is keen. On top of that, she's building a strong relationship with the municipal CAO, who was hired away from the provincial government in September by the past council.

"It's a pleasure to work with Mike Furey," says the mayor.

But there's no denying the expectations are high. And under the confidence that is building day by day in the new mayor, there's an undercurrent of anxiety.

Two to three times a week she wakes up in the middle of the night with what she calls her "mayor-mares" — nightmares about being the mayor.

When she was a young lawyer just starting out she used to have "case-mares"; with time, and countless cases under her belt, she doesn't have those any more.

"I'm anxious," she admits candidly, her composed exterior belying the angst underneath.

It's not the job per say, she says, but the high expectations that come with her unequivocal promises to create change.

"We've set out quite an aggressive agenda with the Council Action Plan," she says.

That plan sits on her desk now, just beside her computer, a reminder of the never-ending work in progress.