Legal requirement to log being met with calls to boycott Whistler
Sep 17, 2010 9:00 AM By: Jesse Ferreras 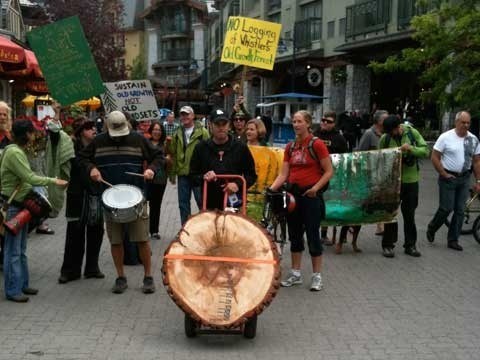 Approximately 15 logging opponents gathered in Town Plaza with placards, drums and a 525-year-old tree stump last week for a demonstration that wound its way past amused onlookers in the village.

Their demonstration was a prelude to an open house put on by managers of the Cheakamus Community Forest, the group that intends to log some old growth forest in Whistler.

"We're asking for zero cut of old growth, and we also want a halt on this whole thing to stop the permits from going in," said Pina Belperio, a Whistler activist and board member of the Council of Canadians. "Given the economics, the low price of wood, it doesn't make sense to go in there, and realistically, we know they're going to go in there and take the old trees."

Opponents worry that the CCF plans to cut "irreplaceable old growth trees" for $30,000 a year - a pittance, according to them. Some protesters are encouraging people to boycott Whistler as a tourism destination until the CCF cancels its plans.

But Peter Ackhurst, a forestry consultant working with the CCF on contract, said he wasn't sure where the figure of $30,000 came from. It probably came in response to a claim that the municipality stands to make millions off the community forest - completely untrue, according to Ackhurst.

Any money made from tree harvesting will be split 60/40 between the CCF and Richmond Plywood Ltd., the company contracted to do the logging. Whatever profit comes forward will be put back into improving the forest.

The CCF is a renewable 25-year tenure on provincial forest land held jointly by the Resort Municipality of Whistler, the Squamish First Nation and the Lil'wat First Nation. Together they're to oversee logging activities in 30,000 hectares that includes the Callaghan and Brandywine Valleys, Wedge Mountain and the Cheakamus Valley.

The community forest tenure requires, by law, that up to 20,000 cubic metres of forest be harvested per year. A board of directors with two representatives from each partner manages the tenure.

Part of the reason some old growth forest will be logged is because other areas are not mature enough to harvest.

The CCF hasn't yet commenced its logging activities, and doesn't plan to until its Forest Stewardship Plan is approved by the Province and permits are issued to allow logging to start. That's expected this fall.

The CCF is also working towards certification under the Forest Stewardship Council with the help of Ecotrust. To achieve that it has to complete a number of steps, among them an Ecosystem-Based Managemetn Plan (EBM), a Range of Natural Variation Assessment (RONV) and a Riparian Management Plan.

The CCF expects to get these tasks completed and attain FSC certification by June 2011.

Asked how the protests could impact tourism in Whistler, Mayor Ken Melamed said Whistler has a strong brand and that forestry once played a big part in building the resort's economy.

"Tourism appeal remains as strong as ever," Melamed said in an interview. "Our interest with the CCF is to see the two coexist.

The CCF is required to maintain forest service roads in its tenure. Those roads are used by many backcountry travelers and tour operators.

Melamed wouldn't specify how much correspondence he's received from people concerned about logging, but he said he's gotten letters from places such as Toronto, Montreal and Gibsons.

A Tourism Whistler spokesperson said in an e-mailed statement, "any issue that can affect visitation to our resort is of interest to Tourism Whistler, and we're monitoring the potential impact on the current situation."

He added, however, that the office has not received any visitor feedback on the logging issue via its call centre that indicates an impact on tourism.