New neighbourhood sets off game of musical chairs with WHA properties, but some not selling
Sep 3, 2010 7:07 AM By: Andrew Mitchell 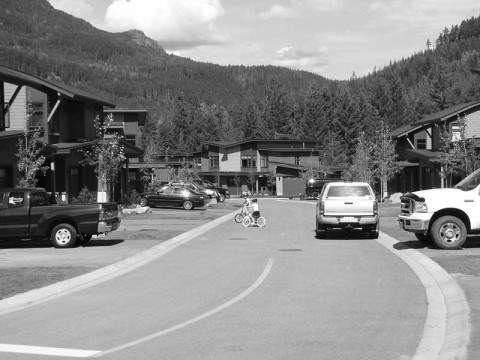 The first families moved into Cheakamus Crossing this past week, and the migration to the new neighbourhood will continue through early October as units are released. When complete, the former 2010 athletes' village will house roughly 1,300 residents in employee and price-restricted duplexes, homes, townhomes and condominiums.

The opening of Cheakamus Crossing is the catalyst for a round of musical chairs in Whistler, opening up other Whistler Housing Authority (WHA) properties and rental accommodation throughout the resort.

For the most part, according to WHA manager Marla Zucht, the move has gone smoothly. Only a handful of Cheakamus residents who own other WHA units have been unable to sell their first properties at the maximum resale value.

"We've been setting a blistering pace of resales this summer primarily due to the Cheakamus Crossing and Rainbow purchasers divesting of their current WHA properties," said Zucht. "Most of the units have in fact been selling quickly and at their maximum resale price."

The exceptions have been the larger three-bedroom units at 19 Mile Creek in Alpine Meadows and Bear Ridge in Spring Creek that continue to appreciate in step with the Vancouver Housing Price Index.

Since 2006 all new and resold WHA homes have been tied to the Core Consumer Price Index for Canada, which traditionally has yielded returns of between one and two per cent. By way of comparison the Vancouver housing market grew by over 50 per cent between 2000 and 2005.

Zuch estimates that 85 per cent of the buyers at Cheakamus Crossing are coming from rental properties, most of those located in Whistler. That, in turn, has meant a flood of units on the rental market, and prices are dropping.

"There are currently more advertised rental units available in Whistler than there have been since 2006," confirmed Zucht.

All of the owners of the unsold WHA homes have signed an agreement to sell their other real estate property within six months. In the meantime they are permitted to rent out the property at rates allowed by the WHA.

All owners must file an Occupancy Declaration to the WHA each year, which allows the WHA to track owners and rentals.

"Typically what happens, and it happens frequently, is tenants (and landlords) will call the WHA to confirm what the maximum allowable rental rate is on a particular resident-restricted unit," said Zucht. "If the tenant thinks they are being overcharged for their rental accommodations at a resident-restricted unit they should contact the WHA so we can confirm the allowable monthly rental rate...

"The restrictions on rental (amount, duration and annual increases) are very clearly stated in the housing covenants. There should be no ambiguity on what is allowed to be charged."

However, if those homes don't sell within the six months, either to people on the WHA waitlist or to other resort employees - which is allowed if a home is passed over by everyone on the WHA waitlist - the WHA cannot compel the owner to sell for less than the maximum resale price.

In those cases, which are rare, Zucht says the rental period could be extended with special approval from the WHA's board of directors. As well, there is a clause within the employee housing covenants that gives the municipality the right to purchase a home, although the clause has never been used.

While that creates the issue of WHA homes being rented for income, Zucht says most of the affected owners are motivated sellers who would be willing to sell for less than the maximum price.

"The reality is that most purchasers need to sell their other unit in order to make the finances work on the purchase of their new unit."

There are currently 614 applicants on the WHA waitlist, down from a high of over 750 a year ago. Roughly 46 per cent of the people on the waitlist are already WHA owners.

In the four years since the first home was sold to an employee off the waitlist there have been less than 20 homes sold that way. Between 30 and 40 resales take place each year.

"Again, it's the three-bedroom owners that are trying right now to hold out for top dollar," said Zucht.