Cheakamus Phase 2 gets funds for planning 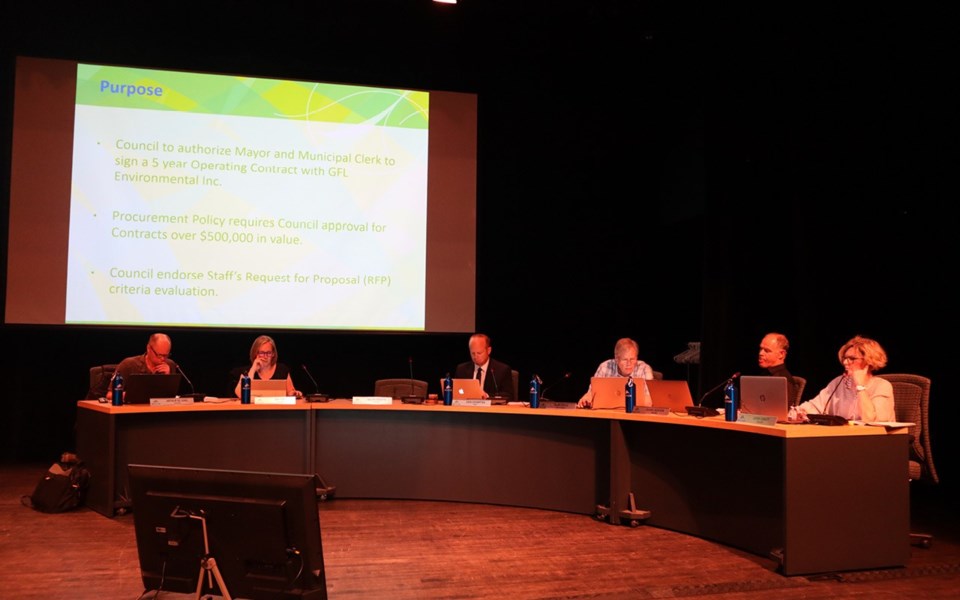 COUNCIL BRIEFS Whistler's mayor and council watch a presentation at the May 28 council meeting. Photo by Braden Dupuis

Phase 2 of Cheakamus Crossing is one step closer to breaking ground.

At its May 28 meeting, council gave first three readings for an amendment to the five-year financial plan bylaw that will direct money towards developing 100 units of employee housing in Cheakamus Crossing.

The amendment will transfer $200,000 from the housing reserves (representing the bulk of the current housing reserves balance) to the Whistler 2020 Development Corp (WDC) to develop the units on Parcel A in Cheakamus.

The money will be used for planning and site preparation with an eye to breaking ground this fall, director of finance Carlee Price said in a presentation to council.

"The reason that this transfer is happening immediately is because WDC does need immediate cash in order to continue to move this project forward," Price said.

"They are working on site preparation for Parcel A and do expect to begin construction sometime after the fall."

Currently, Whistler's Employee Housing Service Charge bylaw—which collects money from developers' projects to be used for housing—provides about $40,000 to the reserves every year.

But with the provincial government now collecting Municipal and Regional District Tax (MRDT) on properties listed with online accommodation sites like Airbnb (and those funds being remitted to the municipality quarterly, potentially to be used for employee housing), the reserves are set to grow.

The Resort Municipality of Whistler (RMOW) budgeted $750,000 in revenue from online accommodation providers for 2019, though "we don't have a tremendous amount of visibility" into if that number will stay the same in future years, Price said.

Tourism Whistler (TW) has also "substantially agreed" to contribute its portion of the MRDT revenue collected from online accommodation providers to employee housing for one year (the total amount of that contribution also won't be known until the end of year).

"I'd like to thank the board members of TW. This helps a lot in keeping the project planning for the housing moving along—costs are being incurred today and every day so this really is helpful," said Councillor John Grills.

WDC will be bringing an update to council "in the near future," said Coun. Duane Jackson, who also serves as chair of the WDC.

"We hired Murdoch and Co. as an architect earlier in the year, who has prepared plans and submitted them to the RMOW at the planning department," Jackson said, adding that the plans have ben reviewed by the municipal Advisory Design Panel (ADP).

"WDC will review the input from the ADP and from staff ... before we revise the plan and then present it to council," he said.

"We will continue progress as fast as we can."

The RMOW unveiled its preliminary plans for Cheakamus Crossing Phase 2 (with a target of at least 550 rental units and a move-in date as early as spring 2021) at an open house in October (see Pique, Oct. 4, 2018).

Calling all qualified Whistlerites: Your expertise is needed at municipal hall.

With council's endorsement of the terms of reference for a new Strategic Planning Committee (SPC) on May 28—which have been revised to include five members-at-large from the community rather than the three that were originally proposed on April 16, and remove representatives from Tourism Whistler, Whistler Blackcomb and the Whistler Chamber of Commerce—the search begins for qualified candidates.

The successful community members will have skills and experience in community planning and development and extensive community involvement, and the positions will be advertised in the coming weeks, said economic development manager Toni Metcalf in a presentation to council.

"It will be comprised of members who bring a unique and strategic perspective, both generally in terms of strategic thinking about the bigger picture and to the challenges that we face as a community," she said.

The committee will act in an advisory capacity to support council in its decision making, with three primary goals: providing input on long-term development, providing strategic input for potential amendments to the Official Community Plan, and to establish guiding metrics and targets "that will effectively help support, manage and balance Whistler's resort and community capacity, while still protecting our unique sense of place and meeting the community's longer-term needs," Metcalf said.

Along with the five members-at-large, the SPC will be comprised of Mayor Jack Crompton (who will serve as chair), two members of council and the RMOW's Chief Administrative Officer, general manager of resort experience and director of planning.

Following the motion to endorse the terms of reference, council expressed excitement over the new committee.

"We've just gone through the only time in our operating history where we've had four good winters in a row, so I really have my eyes on scenario planning so we can be resilient in whatever's thrown at us stepping into the future."

Some municipal councillors are taking on new committee roles.

At the May 28 meeting, council voted to shift Coun. Ralph Forsyth to the Audit and Finance Committee, Coun. Cathy Jewett to the Human Resources Standing Committee and Mayor Jack Crompton to the Whistler Animals Galore board of directors.

As well, the RMOW has finally settled on its Climate Change Coordinator.

Max Kniewasser, a Whistler resident of three years, will step into the role on June 10, announced De Jong at the May 28 meeting.

"He was previously with the Pembina Institute as the director of the B.C. clean energy economy program, so we've got a real bright mind there," De Jong said.

Also at the May 28 meeting, council awarded a contract for compost operations at the Whistler Compost Facility in the Callaghan Valley to GFL Environmental Inc., which has successfully operated the compost facility for the last 10 years.

GFL won out over two other bidders, and will now enter into a five-year contract with the RMOW that the company says will result in savings for the municipality (from the current $131.60/metric tonne of organic material processed to $125/metric tonne).

The total amount of the contract will depend on the amount of compostable material each year.