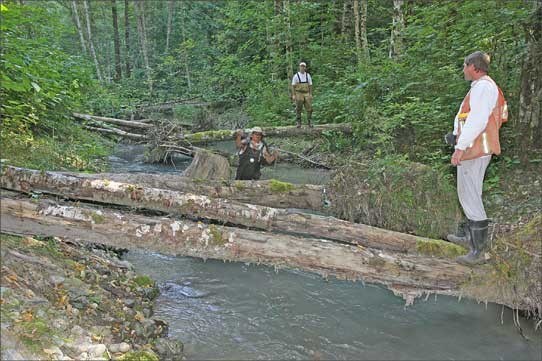 Peter Frederiksen, far right, checks in on workers Allen Lewis and Murray Metcalfe at a Cheakamus River side channel. The workers, contracted by CN as part of the river’s recovery plan, were repositioning flood debris to build water refuges for juvenile fish. Photo by Maureen Provencal

There’s no trail through the bush to the Cheakamus River side channel where workers are moving debris marooned from a 2003 flood back into the water. But supervisor Peter Frederiksen of Triton Environmental Consultants follows sounds of voices and a ratcheting cable puller through the forest to the four-metre wide Gorbushka side channel to discuss rehabilitation efforts with two workers.

“Messy channels can be a good thing as long as it’s not too messy,” Frederickson says about the waters cluttered with logs, tree stumps and clumped branches.

“It’s a relatively slow process but the alternative would be to walk in here with an excavator… and you can imagine the damage to the riparian zone (that would cause),” Fredericksen says.

Tributaries of the Cheakamus River, the side channels are being plumped up to entice returning coho, chum, pink salmon and steelhead to the area and to provide nurseries for resulting fry and smolts. Part of a recovery plan designed to help fish numbers rebound from the devastating August, 2005 sodium hydroxide river spill, Canadian National Railways is financing rehabilitation of spawning side channels that were disturbed by the 2003 high water flood. Hired by CN to implement the recovery plan that was finalized Aug. 15, Triton staff and contracted fish technicians are building woody debris refuges for small fish to hide in and around before they migrate to sea.

“Juvenile fish like to have little breaks from higher velocities of current to hide from predators and a refuge area where they can sit in slow water and then dart out into fast water to pick up food items that are drifting by,” Frederiksen says.

Steelhead are more difficult to build rearing grounds for than coho or chum, preferring faster moving waters, Frederiksen says. The robust fish may find nearby Mykiss channel, whose velocity can be controlled with a gate valve, more to their liking.

Drafted by a consortium of First Nations, federal, provincial and district agencies, with input from environmental and angling groups, the recovery plan has provisions for both habitat and hatchery enhancements in order to achieve clear numbers of fish by a certain date. Expected to take 10 years and costing millions of dollars, the efforts are aimed at bringing back up to 160,000 chinook salmon, 128,000 coho, and 400 steelhead. Targeted numbers for cutthroat, char, sculpins, lamprey and stickleback are less clear because of lack of pre-spill inventory data on those species.

Fredericksen supervises a half dozen projects as part of the Cheakamus recovery plan. Removing a concrete apron underneath Cheekye River bridge will allow steelhead easier passage, as will clearing out the head of a dry creekbed at Kilometre 11. His favorite project, Frederiksen says the Kilometre 11 project will have the most visually dramatic effect. “It has the most opportunity to create a lot of fish habitat right away.”

About 35,000 steelhead fry are being raised at Fraser Valley Trout Hatchery in Abbotsford. Culled from eggs of 10 pairs of steelhead, the hatchery’s manager says the fry are robust.

Divided into two groups of equal numbers of three gram and 1.5 gram fry, they need to reach 80 grams before release in May, 2007.

“We’re just having discussions right now as to where in the Cheakamus to release them,” Larson said. “If it’s for replacement of population we’ll likely put them upriver so they distribute throughout the whole system, or another option is to put them in a side channel so they can be monitored as they go out.”

Original targets for release of smolts had been 20,000. What will happen to the extra number of smolts is also under discussion.

Pushing back through the forest to the access road from the Gorbuska side channel, Frederiksen points out three-foot cedar saplings, pioneer species, he explains. Thirty years ago Gorbushka channel had a different course and after periodic flooding changed its direction a variety of vegetation and trees took hold in the exposed area. Cedars and maples take over as alders that initially sprung up are now nearing the end of their life. Frederiksen notes how disturbances in nature sometimes have positive spinoffs and makes the connection to the Cheakamus project.

“It was an unfortunate incident (the CN derailment and spill) but there are a lot of good things resulting in terms of recovery planning, strategies and cooperation between agencies. They all worked very hard to come up with some recovery strategies and targets that we can use to measure recovery.”