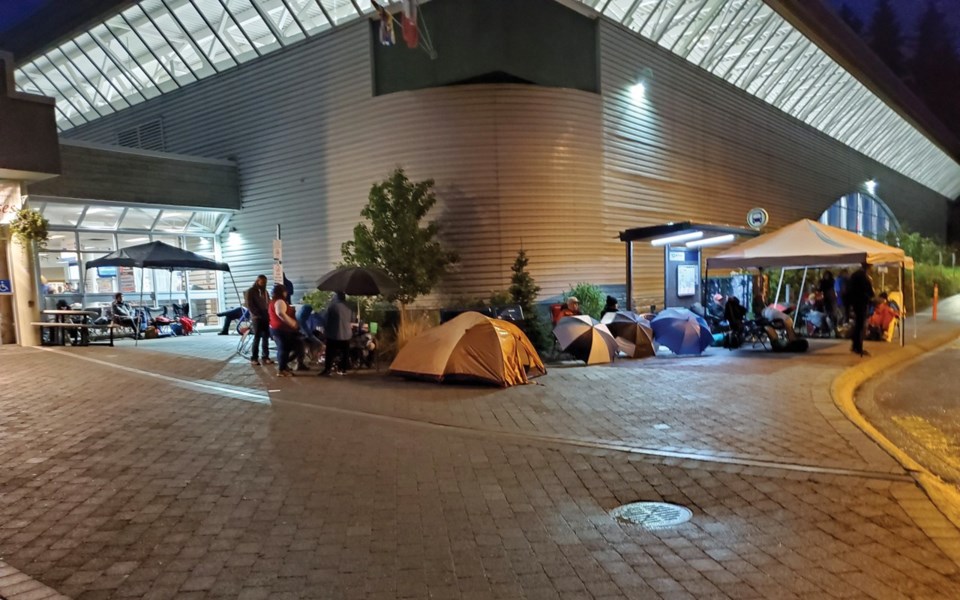 tent city Dozens of parents lined up overnight in the rain on Aug. 10 to ensure their kids' spots in Whistler's Kids on the Go after-school care program—with varying levels of success. photo submitted

while some Whistler parents remain frustrated with childcare options and a perceived lack of urgency at municipal hall, the issue expands far beyond Whistler, say local stakeholders.

"It's got to go bigger picture," said Kari Gaudet, executive director at the Whistler Children's Centre.

The lack of childcare options is exacerbated by staffing, housing, a lack of people going into the Early Childhood Educator (ECE) field, and licensing requirements, Gaudet said.

"When it comes to the licensing requirements and people going into the field, those are provincial problems," she said.

"This isn't a Whistler problem, this is a provincial problem, and essentially it's a federal problem as well, but it's nothing to do with Whistler."

"They want to come and talk to me and learn about what could be done, and then they try a couple of things and they realize how quickly you hit a brick wall," she said.

"I think we just need to be talking to the higher ups."

The most recent bout of frustration stems from the Resort Municipality of Whistler's (RMOW) Kids on the Go after-school program registration, which once again saw dozens of parents camping out overnight in the rain to get their kids a spot in the program.

Lesley Clements said she lined up at Meadow Park Sports Centre at 1 a.m. on Aug. 10—the earliest she's ever been there—and still ended up with No. 46, which secured her "about two thirds" of the spaces she needed.

"My biggest beef is [that] this has been the third year in a row that I've had to stay up all night to register my kids for a fundamental after-school program," Clements said.

"It just seems so archaic ... The first person out there, he was there at like 2 o' clock in the afternoon."

While she recognizes the challenges with finding ECEs (and housing them locally), Clements feels the issue deserves more focus.

"More time and energy and money, definitely," she said.

"They put out a survey this summer to maybe implement things like, this coming year, where it's like, this should have been done years ago, realizing that the community is growing at this specific age group, and we need to provide for our long-term citizens that have been here for many years."

The RMOW said it undertook "several actions" in response to last year's feedback, including moving the registration time from 9 a.m. to 6 a.m., working with other agencies and organizations to coordinate the release of after-school schedules (in advance of Kids on the Go registration), and to create two new after school programs through the Whistler Tennis Academy and Whistler Sport Legacies.

Pay for program leaders was also increased to $23.43 an hour, plus 12 per cent in lieu of benefits.

There are currently 115 kids registered for Kids on the Go for the 2019-20 school year. While last year had 180 registered, the comparison isn't "apples to apples," a spokesperson said, as kids can join anytime throughout the year.

Whistler Councillor Jen Ford—whose husband lined up at 10 p.m. to ensure spots for their five-year-old—noted that the provincial government has made some investments in childcare, but local officials need to "keep the pressure on."

With the annual Union of BC Municipalities convention set for Sept. 23 to 27 in Vancouver, the issue will likely be a hot topic.

"I think there is a heightened awareness, because every community is feeling it," said Ford, who oversees Whistler's social services and regional cooperation portfolio.

"We have strength in numbers when all of the communities are kind of singing the same tune, and saying we need to continue to commit to better care, better education, more available education for ECE teachers, so that we can get more and more people into the line of work, because that's certainly where it all stems from, is the availability of qualified staff."

With a federal election on Oct. 21, Ford said it's important to keep the conversation going.

And as for addressing the frustrations of local parents, it's something the RMOW is always working on, she added

"It was a tough registration. I know there were a lot of people out there all night long, and I know that it's frustrating for families," she said.