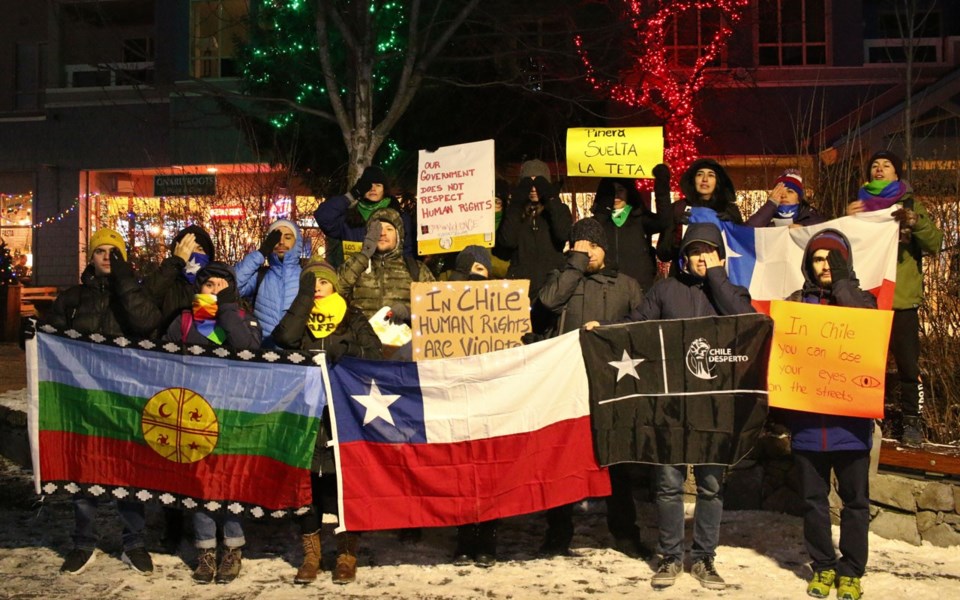 IN SOLIDARITY Chilean protesters hold a hand over one eye during a Dec. 1 demonstration in Whistler. The action has become a symbol of the Chilean protests, drawing attention to police repression and the 200-plus people who have suffered severe eye damage from rubber bullets. Photo by Carolina bustos

A group of about 25 Chileans protested in the village on Saturday, Dec. 1 in a show of solidarity for the ongoing protests in their home country.

"If you saw the news, there were similar protests in Toronto and Vancouver," explained organizer Daniel Vidal Araneda. "Everywhere in Canada, Chileans were protesting."

The Chilean protests began in October, after the government raised metro fares by four cents in the country's capital, Santiago. The action was the straw that broke the camel's back, setting off massive demonstrations and calls for dramatic reforms, including to the country's lacklustre public education and medical systems, pension plans, and how water is owned and distributed.

Araneda said that at the heart of the protest is the country's acute inequality, with low wages and high living costs making it impossible to live comfortably for the average worker.

Among all Organization for Economic Co-operation and Development (OECD) countries, Chile has the highest levels of inequality.

Araneda and his wife came to Canada in part due to economic conditions.

"We didn't have enough money to live in Chile," he said. "The salaries are really bad. That's the big problem in Chile."

Araneda added that it is important for the public to gain a positive impression of the protests taking place.

Media coverage within Chile has played up the violence of protestors, he said.

"The communication in Chile is trying to show another version in Chile, of what's happening, of violence," he said. "It's not like that. We have [been faced with] major repression, but the TV is not showing that."

Both Human Rights Watch (HRW) and Amnesty International have condemned the police responses to the Chilean protests, with a recent HRW report documenting instances where police had brutally beaten protestors, shot tear-gas cartridges directly at them, and even run over some with vehicles or motorcycles.

Since the protest began, 26 have died and thousands more have been injured.

Moreover, more than 200 people have suffered severe eye damage from rubber bullets, which the government has since banned police from using.

As part of their protest, the Whistler Chileans covered one eye with one of their hands.

The pose has become a "symbol" of the larger protest movement and is being done in Chile as well, explained Cristian Navarro, who works as a drafter at Blackcomb Glass and has lived in Whistler for the past four years.

Navarro recently returned from a three-week trip to Chile, where he spent few days on the streets of Santiago with the protestors.

"I spent a few days protesting with the people there in the streets, trying to understand their reality right now," he said.

Navarro described a difficult scene, with protesters helping one another in the face of heavy police repression.

"It was pretty intense ... The people were helping each other, and the police were throwing tear gas and [using water cannons]," he said.

With a long history of stringent neo-liberal policies, the Chilean government has been forced to make concessions to the protestors, including an offer in November to re-write the country's constitution if the public votes in favour.

The constitution dates back to the military rule of dictator Augusto Pinochet, and provides little role for the state when it comes to regulating the free market at providing public services. Getting it re-written has been a principle aim of the diffuse protest movement.

A plebiscite on whether to re-write it is scheduled for April 2020, but Navarro said there is concern that the new constitution will be drafted by people with ties to the current political parties.

"The people want change [to the system], and the system is protected by the constitution, written down by Pinochet," said Navarro. "That's why the people [are] protesting, because nothing has been done to change the system."