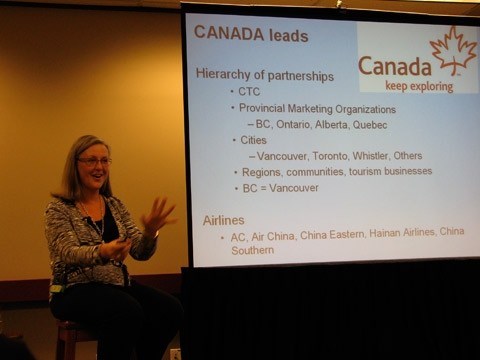 If you're going to attract Chinese consumers, avoid using the number four, keep a kettle and tea within reach and be prepared to haggle.

These were some of the messages coming out of the Whistler Conference Centre on Tuesday at a Tourism BC (TBC) and Tourism Whistler (TW) information session for local businesses on how to conduct business with the Chinese.

"I've been there 20 or 30 times and every time I go I learn 100 new things, I come out with a hundred new questions. It can be such a confusing place to try to do business," said Cindy Gobin, Ministry of Tourism, Trade & Investment's market development manager for Asia. "People in China look at the world very differently than we do... it's one of the oldest cultures on the planet. That's not going to change just because it doesn't work for us."

Gobin was referring to customs and business practices that would be considered unusual in Canada. Along with a staunch belief in numerology, the Chinese tend to be focused on status instead of experience - they'd rather take a picture in front of the totem poles at the Royal BC Museum than explore the exhibit.

Much of the hype around the burgeoning travel market in China is still just hype. In 2010, 52 million residents left China for other places, but those numbers may take time to translate into big bucks in Canada.

"Here is a reality check - about 90 per cent of that business is still just in Asia and about 80 per cent of that is just Hong Kong and Macau so it really shows that when you're allowed to leave your country for the first time you're pretty much going to stay in your own country and explore it and then stay close to your home," continued Gobin.

"TBC research shows that upwards of five million Chinese have the means and desire to come to Canada. Those are the ones we need to zoom in on because we're not going to get the others to change."

Chinese travellers reserve one third of their travel budget for shopping. While here, they covet luxury goods like name brand fashion, Canadian diamonds, maple products and ice wine. While this can mean big sales for local businesses, it doesn't mean accommodation-based business will experience the same extravagance. While Japanese tourists typically set aside 36 per cent of their travel budget for hotels, the Chinese spend 21 per cent and are less interested in high-end digs.

To accommodate the new tourism market coming out of China, Tourism Whistler is assessing ways to promote the resort and keep Chinese travellers here for more than a day. Along with other high profile destinations, the resort will be promoted in a Canadian Tourism Commission (CTC) ad campaign in China this week called "Say Hello to Canada," set to run in a variety of prominent magazines and newspapers.

While China's fledgling ski industry will be examined for potential partnerships, the summer market has been crowned a more reasonable short-term target.

"Our focus in China is going to be summer business to Vancouver as that's when the volume of traffic comes from China in terms of air capacity, so there are huge opportunities for us there," said Kim Hood, manager of leisure sales for Tourism Whistler, adding that TW is partnering with Tourism Vancouver and the CTC to leverage promotional and research funding in the China market. "At the same time we're going to be exploring a lot of winter opportunities," said Hood.

"We know there is a ski population over there but we don't know a lot about them yet so we're going to spend a lot of time digging and researching. We want to talk to them about what they want - is it a winter experience package instead of just a ski and snowboarding package?"

Vancouver will be the focus of the March 2011 issue of China's World Traveler Magazine . The city and surrounding areas, including Whistler, will gain exposure in an 80-page spread complemented by eight 25-minute episodes on the magazine's website. That, plus additional exposure in airport and subway screens and a related iPhone application, has a combined marketing value of $12 million. In all, the issue will expose British Columbia to 170 million people.

In March, Tourism Whistler will conduct an online research survey at a popular outdoor adventure site in China with the goal of assessing the buying practices of the demographic that might be attracted to Whistler. They are also reviewing their promotional materials and brochures, which might be more effective if recreated in an esthetic that appeals to the Chinese.