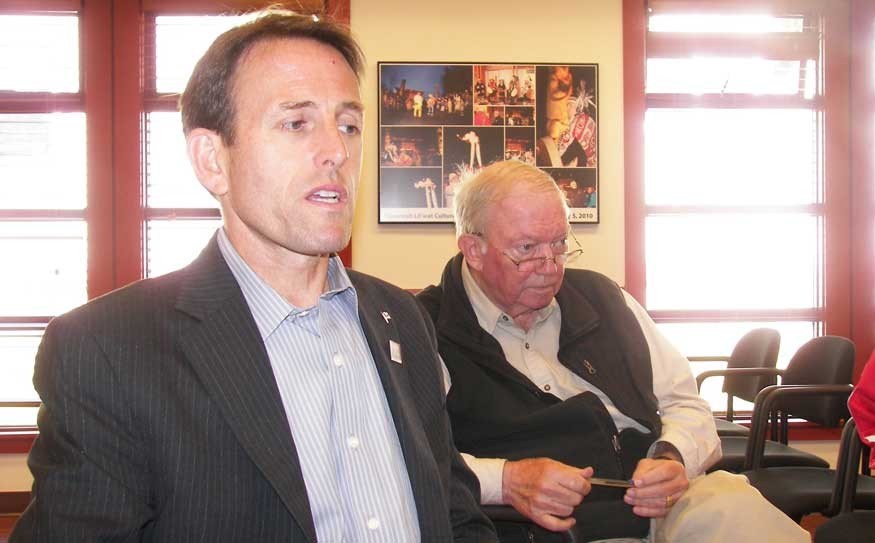 MP John Weston said he would work with fish advocates like former Fisheries Minister John Fraser to ensure concerns over Bill C38's impacts on fish are conveyed in Ottawa.

A group of concerned environment advocates met with a federal cabinet minister this week to talk about the controversial omnibus bill known as Bill C38, and the bill's impacts on the future of west coast fish.

MP Randy Kamp, the parliamentary secretary to the Minister of Fisheries and Oceans, was in Squamish with MP John Weston for the meeting. The two Conservative Members of Parliament spent more than two hours meeting with a number of people at Totem Hall in Squamish to discuss changes to the Fisheries Act.

Otto Langer, a former Department of Fisheries and Oceans scientist, came from Vancouver to hear what Kamp had to say about the future now that Bill C38 has passed. He said he didn't get very much out of the meeting with Kamp and Weston.

"The government made ideological changes to the Fisheries Act, now they're trying to rationalize them," said Langer. "Now they are even trying to define terms they put into the Fisheries Act. You do all that early in the game and you consult. They are doing it bass ackwards."

He accused the ruling Conservatives of not being honest about how Bill C38 will impact fish and fish habitat.

"They dug a hole 10-feet deep and now they want to consult with us," said Langer. "It is like someone putting a knife in my back and then wanting to consult with me about what colour flowers I want on my casket. It just doesn't go that way."

Whistler residents John Fraser and Dave Brown were also at the meeting along with Randal Lewis of the Squamish Nation.

All three are advocates for fish and fish habitat with concerns about the changes brought by the Bill C38. All three are also members of a special advisory committee Weston put together.

Brown said after meeting with Kamp that the members of Weston's Fisheries Advisory Committee still have concerns for fish and fish habitat.

"There's a little bit of skepticism whether we're going to be listened to," said Brown.

Weston responded by saying that the fisheries minister is looking for some answers to a series of specific questions brought to the meeting by Kamp.

"If the government is ever going to listen on habitat and fisheries issues it is now because there has been such an outcry over Bill C38," said Weston. "So if we can generate some cogent responses to these questions in a way that is readily digestible then I would say we should, and the sooner we do it the better."

Fraser, a former Fisheries Minister, said it is now time for those concerned by the changes brought about by Bill C38 to band together as a group to work with Weston to convey the citizen concerns for the future of fish on the west coast.

"I think if we stay together and keep talking to John Weston we can influence the process," said Fraser.

Brown said the next move is to prepare concise answers to the long list of questions presented by Kamp and then get the responses to Weston so he can pass them on.

The fish advocates are looking for a government commitment to ensure fish habitat will be protected so Pacific salmon species continue to exist into the future.