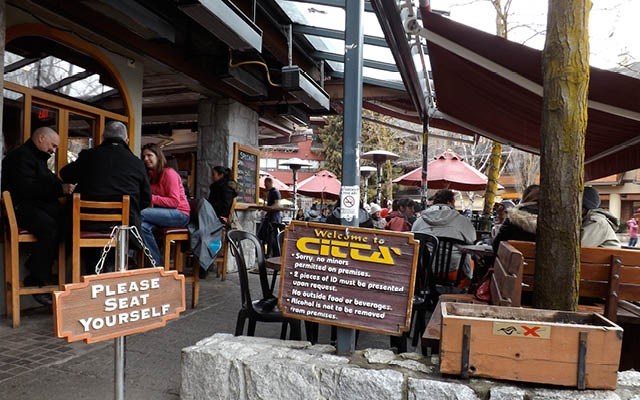 The owner of Citta' is hoping a meeting with the CEO of Burrard International Holdings Inc. might save the Whistler institution.

Recent meetings between Sonia Bozzi, the president of Citta' Bistro Ltd, and municipal officials did not offer any official hope in saving the iconic Village Stroll eatery.

Bozzi has requested a meeting with Caleb Chan, the co-founder, executive chairman and chief executive officer of Burrard International Holdings Inc., which owns the Crystal Lodge space where Citta' is located. According to Canadian Business magazine, Chan and his brother have a net worth valued at more than $1 billion.

"They're faced with the loss of their business. I'm very sympathetic," she said.

There is, however, nothing that mayor and council can do to intervene.

"I confirmed that at least from my personal perspective this council would not be getting involved in it," she added.

"There's really no role for municipal council in this matter."

The RMOW communications department confirmed there is no open development permit for owners Burrard International.

In July 2009, the RMOW rejected proposed renovation to the Citta'. Crystal general manager Bryan Pilbeam said at the time: "The issue with that one was a reasonable expansion and renovation (that was) proposed, that was not supported by the (municipality). A substantial renovation won't be undertaken at this time, but there is a plan to upgrade the interior of the space to bring the tenancy up to date."

The municipality has a keen eye on any proposed changes at Village Square. The 2014 budget includes a $1.5-million line item for Village Square & Mall Rejuvenation. The improvements are for things like landscape, seating, lighting, way finding, place making and other public amenities.

Bozzi said she didn't get a meeting with Chan but she did meet with senior members of the Burrard International staff with the Citta' lease set to expire on May 31. She couldn't discuss details of the meeting, but she had planned to convey what Citta' means to the resort.

To paint the picture, Bozzi shared a March 31 email she received from Adam Pollard of Plymouth, England.

"I hear that the bar is closing at the end of the season, that's shocking news," wrote Pollard. "Most of the bars in town are 'big' impersonal spaces. Towns like Whistler need to encourage and embrace small, friendly bars where you can meet the locals. That's what we go for."

Loyal customer Stephen Vogler, a musician and writer, has spent a significant amount of time at Citta' over the years. Many of the interviews he did for his book called Only in Whistler: Tales of a Mountain Town were done at Citta'.

"I interviewed people like Charlie Doyle about the Whistler Answer, Michelle Bush and her stories about travelling with the circus and I interviewed the whole crew from the Boot Pub upstairs there. That place had just gone down so many years earlier, so to have them all in Citta' there to have them recounting the hilarious stories of the Boot Pub (was amazing)," said Vogler.

Bozzi said when she told the Citta' staff the lease wouldn't be renewed, they wanted to know what they could do to help prevent the bistro from closing.

"And then after that, we started to get all this outpouring of support and dismayed feelings from people locally and even internationally," said Bozzi.

"If people care that much then it's something bigger than just a business, my interests and my family's venture."

Bozzi said if a lengthy lease is negotiated for Citta', she plans to renovate and modernize the bistro.

"We don't want to stay to just be the same, but we want to be the same in terms of the heart and soul of the place," she said.

A new venture is proposed for the Citta' space in the Crystal Lodge building. Pique's efforts to arrange an interview with Chan were unsuccessful.