Climate Action Plan aims to get Whistler back on emissions track

RMOW and BC Transit to provide free transit on busy summer Saturdays
Aug 1, 2016 5:00 AM By: Braden Dupuis 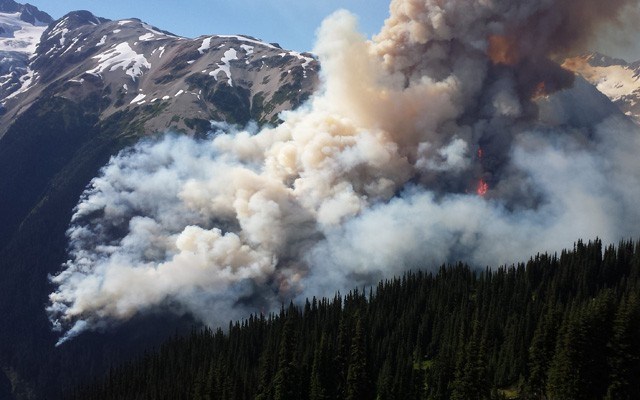 Hotter, dryer weather Whistler is no longer on track for its greenhouse emissions reductions, which can contribute to climate change. Pictured is the Boulder Creek wildfire near Pemberton from 2015. PHOTO courtesy of BC wildfire service

Last summer it was revealed that as of 2013, the Resort Municipality of Whistler (RMOW) was no longer on track to meet its 2020 greenhouse gas (GHG) emissions targets, but with the 2016 Community Energy and Climate Action Plan (CECAP), the municipality hopes to get where it would like to be.

The plan — which replaces an older document from 2004 — was officially endorsed by Whistler council at its July 26 meeting.

It has been in the works for some time, and outlines potential climate change impacts as well as recommended actions moving forward.

"The reality is that our local daily choices have a significant impact on the stability of our climate and our local impact," said director of corporate, economic and environmental services Ted Battiston in a report to council.

"Nearly 60 per cent of all the emissions in Whistler come from the use of passenger vehicles within municipal boundaries."

But the problem can't necessarily be blamed on Whistler's increased visitation numbers either, Battiston said.

"Estimates of our engineering team indicate that somewhere between 30 and 50 per cent of those emissions that come from passenger vehicles are sourced from current and seasonal residents, not our guests," he said.

"It is the single biggest reason why we're not making our overall targets."

It's clear that if Whistler wants to get serious about climate change, it's going to have to get people out of their cars.

Rather than the targeted 15,000-tonne reduction compared to 2007 levels, emissions from passenger vehicles are now actually 1,700 tonnes greater than they were in 2007.

The CECAP proposes a series of phased initiatives over the next decade, all designed to reduce energy consumption and GHG emissions. They range from expanding access to mass transportation and growing the use of electric vehicles, to enhancing the efficiency of homes and commercial buildings.

But even if every recommended initiative is completed, the CECAP acknowledges it likely won't be enough to meet Whistler's ambitious targets.

"If we did everything that's in the document according to the phasing schedule that's included in there, and the actions have the impacts that they're forecasted to have, we'll be a couple of years late."

The CECAP acknowledges that not only will it take a complete buy-in from residents, the local government and the business community, but higher levels of government have a major role to play as well.

"Both the province and the federal government have to step up with the things that are in their jurisdictional boundary if we are going to make our goals," Battiston said.

"Our forecasting suggests we can't get there alone with the powers and the projects that we have within this document."

Battiston said some people have asked why the targets can't simply be changed or adjusted, to which he replies that they're ambitious for a reason.

"Though we currently have projected that we will not meet the targets by 2020, they're important because they are fundamentally grounded in the leading and accepted science, and less ambitious targets would not meet the current international commitments that were discussed in Paris," he said.

"Furthermore, they set an important trajectory for action, advocacy and for driving ongoing commitment to reducing emissions and energy use into the future for all levels of government."

The plan also delves into the adaptation side of climate change, and outlines three key changes to the local climate over the next 25 to 55 years: An increase in the frequency and intensity of heavy-rain events; longer, hotter and drier summers; and milder winters, with more precipitation falling as rain near the valley floor.

To increase Whistler's resiliency, the CECAP establishes a series of objectives, priorities and recommendations, including: renewing integrated storm-water management, water conservation and wildfire-protection plans, increasing access to weather-independent attractions and increasing communications and engagement around climate and energy issues.

The full plan will be posted to www.whistler.ca/services/environmental-stewardship/climate-action-and-energy.

RMOW, BC TRANSIT OFFER FREE TRANSIT ON SATURDAYS UNTIL SEPT. 3

In an effort to both ease congestion and curb local GHG emissions, the RMOW and BC Transit are teaming up to provide free transit for bus riders on six consecutive Saturdays, beginning July 30.

Transit service will be free to riders from the first bus until 6 p.m. on each Saturday until Sept. 3.

The initiative comes from Whistler's Transportation Advisory Group (TAG), which was formed to address and recommend strategies related to local transportation issues.

"We heard from residents at the community forum in June that providing transit free of charge to riders could encourage local ridership. With the (TAG), we have been able to look at this suggestion and are operating the six free transit Saturdays as a pilot project to measure how well this incentive works," Whistler Mayor Nancy Wilhelm-Morden said in a release.

"We always encourage residents to consider alternate ways to travel into the Village during peak times and we continue to look at possible ways to reduce congestion on the highway."

Free underground parking is available at Creekside for people who want to park there and bus into the Village.

The RMOW encourages all residents to be aware of peak travel times in the resort, and give themselves time to walk, bike or take transit when possible.

If driving is necessary, residents are asked to find alternative parking lots in the Village if the Day Lots are likely to be full.

A map of parking in the Village is at www.whistler.ca/parking.