As a southern Ontario teenager in the 1970s, David Smart escaped the boredom of suburbia by climbing the cliffs at Rattlesnake Point.
Dec 8, 2019 11:00 PM By: Lynn Martel 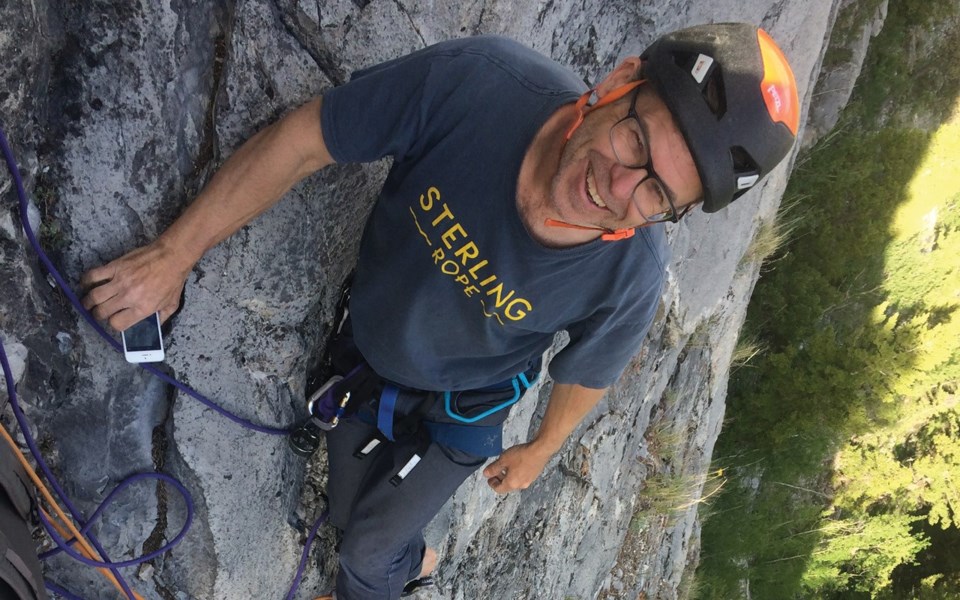 Top Rope David Smart (top), a lifelong climber and author, has been awarded the Summit of Excellence. photo submitted

As a southern Ontario teenager in the 1970s, David Smart escaped the boredom of suburbia by climbing the cliffs at Rattlesnake Point. As he pursued his passion he also discovered, at his local library, that many climbers before him had written books—some exceptionally good—about their activities on rock walls and mountains around the world.

"I always loved adventure and history books as a boy," Smart said. "I loved Beau Geste and Moby Dick, The Odyssey, but since I was too young to be a whaler or join the French Foreign Legion, I became a climber. When I found out there were books about it, I found a way to make it fill all my time."

Smart's passion for climbing, and for books about climbing have shaped and enriched his life ever since. Most recently, at the 2019 Banff Centre Mountain Film Festival, Smart was presented the Summit of Excellence Award, given annually to recognize an individual who has made a significant contribution to mountain life in Canada.

Beyond climbing classic routes in Yosemite, the Alps, the Canadian Rockies, B.C.'s Bugaboos and Squamish, Smart has developed more than 300 new routes for others to enjoy in Ontario, Quebec and Alberta.

In addition to writing five climbing guidebooks—the first in 1984 which he convinced his grandfather to print—he's also penned two historically themed climbing novels, Above the Reich and Cinema Vertigo, both published by Imaginary Mountain Surveyors. His poignant and humorous memoir, A Youth Wasted Climbing (Rocky Mountain Books), was shortlisted for the Mountain Literature Award in the 2016 Banff Mountain Book Competition.

And his new book, Paul Preuss: Lord of the Abyss, a biography of the enigmatic early 20th century Austrian climber made the short list for this year's prestigious Boardman Tasker Award for Mountain Literature.

Smart said he was inspired to write about Preuss because while everything he read about the man spoke of his extreme views, he remained an exceptional climber.

"He always intrigued me because all that was typically written in history books was about how extreme his views on style were, and yet he was the best climber in the Alps," Smart said. "The more I learned, the more I wanted to read a biography of him."

An admitted lover of magazines, Smart has written for Climbing, Rock and Ice, Alpinist and the Canadian Alpine Journal. And in 1999, with his fellow climber, Sam Cohen he founded Gripped: Canada's Climbing Magazine. Two decades later the company owns four titles, while Smart contributes to Gripped as editorial director.

Writing about climbing, Smart said, came naturally as a means of recording and communicating his and his friends' accomplishments in the 1980s, as guidebooks of that era tended to focus on instruction. "It was also a journal of the passions and achievements of successive communities," he said.

"I have always seen writing about mountaineering and climbing as an important discipline within the sport. As a kid, I always assumed that Chris Bonington, David Roberts, Gaston Rebuffat, Doug Scott and Royal Robbins and the rest were the best climbers because I could read their books."

In teaming up with Cohen to create Gripped, Smart said their motivation grew from an absence of a Canadian climbing magazine.

"There have been many challenges, but we're still doing well, publication-wise," he said. "I'm proud to be able to provide a magazine that offers a voice for the Canadian climbing scene in which I made my own life."

The current popularity of climbing has helped create a crisis within the sport, he added, a situation writing can help remedy.

"It feels great to add something to the culture, to tell stories most people don't know or to increase our understanding and love of climbing culture," Smart said. "There is a crisis in climbing culture right now with so many new climbers and so few of them really knowing or understanding our story. Writing about it can help with this."

To this end, the contribution his book on Preuss has made was publicly recognized by master climber Reinhold Messner who praised it during an on-stage interview at the recent Banff mountain festival.

"I was a bit surprised, but as he is an expert on Paul Preuss, I took it as a compliment," Smart said. The shout-out from Messner aside, receiving the Summit of Excellence, Smart said, is a tremendous honour.

"Climbing has meant so much to me in my life and the Banff Centre has such an amazing role in mountain culture," he said. His passion for climbing, he admitted, is as deep as ever.

"[Climbing means] everything, almost, like it did when I was 17," he said. "I wish I was climbing right now."