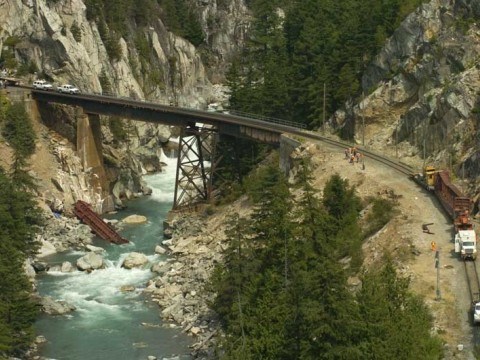 The Canadian National Railway Company has been fined $400,000 as part of a settlement in connection with a major spill into the Cheakamus River in 2005.

CN faced charges under the federal Fisheries Act and the Migratory Birds Convention Act after train derailments two days apart in Wabamun, Alberta and Squamish, respectively. In the latter case a train derailed at about 7:15 a.m. on Aug. 5, 2005, on a section of track in the Cheakamus Canyon north of Squamish.

Nine cars were overturned in the derailment and one of them spilled over 40,000 litres of sodium hydroxide into the river, leaving countless dead fish and invertebrates along its banks. It's believed that the spill killed approximately 90 per cent of aquatic life in the river downstream of the crash.

CN pleaded guilty in North Vancouver Provincial Court on May 25 to one count of depositing a "deleterious substance" into waters frequented by fish, under section 36(3) of the Fisheries Act.

CN will pay a penalty of $400,000 as part of a settlement; that includes a fine of $50,000 and an order to pay $350,000 towards projects in the Squamish River watershed, according to a news release from Environment Canada, which cast the settlement as a "conviction."

In its own news release about the settlement, CN noted that it has spent about $5.3 million to fund the Cheakamus Ecosystem Restoration Technical Committee (CERTC), a partnership between the rail company, the District of Squamish, Fisheries and Oceans Canada, the B.C. Ministry of Environment and the Squamish First Nation.

Part of that funding, CN claims, has also been put towards the Pacific Salmon Foundation and helping market the District of Squamish as the "recreation capital of Canada."

The goal of the CERTC was to restore the Cheakamus as "quickly as possible" and CN notes that remediation and recovery efforts are underway.

CN also noted in its news release that the company reported the spill to the Provincial Emergency Program immediately after the spill and responded "promptly and appropriately" to the incident.

"These programs show that CN has lived up to the commitments it made at the time of these unfortunate incident," CN President and Chief Executive Officer Hunter Harrison said in a prepared statement. "We said we would repair any damage done and fairly compensate those affected. We have done what we said we would do."

In a separate case, CN is being ordered to pay a total of $1.4 million for an Aug. 3,2005 spill into Alberta's Wabamun Lake. The penalty includes payment of $600,000 to the Wildlife Rehabilitation Society of Edmonton. CN will pay another $400,000 to fund special fish habitat projects in Alberta.

The spill dropped about 800,000 litres of bunker oil and wood preservatives into the lake, forcing authorities to truck drinking water into the area for 18 months, according to the Edmonton Sun .

The spill killed birds and fish and brought two charges against the company - one of depositing a substance harmful to migratory birds in water frequented by birds and another of harmful alteration, disruption or destruction of fish habitat under the Fisheries Act.

CN says it has spent $132 million towards remediation effects in Wabamun Lake and to compensate stakeholders.