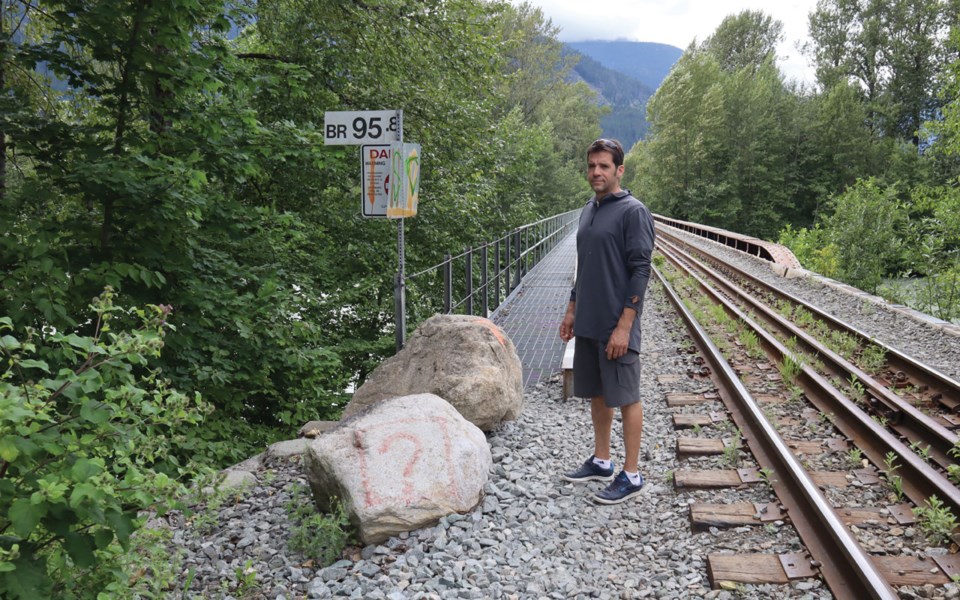 So she wasn’t entirely surprised when a CN Police officer handed her a $115 fine on Nov. 25.

“It was my turn, my unlucky day to pay the toll, the troll at the bridge,” she told Pique the day after the incident. “I’d just gone for a walk across the bridge like I normally do, and coming back, I guess it was a CN Police [officer] who stopped me.

“I definitely know people who have been ticketed before, and I’ve heard about it, but I’ve never been stopped. I’m not surprised, just disappointed.

“I know I am trespassing. I fully acknowledge that. But Pemberton has lots of restrictions to access: the river, the railroad, dikes that aren’t public. Those trails on the other side of that river have become pretty essential to our community and they have been for a long time.”

The bridge, which has a walkway in addition to the tracks, has long been used illegally as politicians and area stakeholders look to secure a legal Lillooet River crossing into the park. Downing estimated she crosses roughly three times a week to the park, which has a bench dedicated to the memory of her daughter, Riva Fisher.

“I like to think that CN would be good community citizens, that we can have some discussions and solve this problem,” she said. “If safety is the primary concern, let’s talk and see if we can come up with a solution.

“The problem is not going to stop.”

Urdal Road resident Jan Naylor who, along with husband Hugh, granted the Squamish Lillooet Regional District a right of way on their land in 2016 for a trail to the bridge, talked with the CN officer after hearing he was out ticketing in the area.

A friend returning from the park told the Naylors that she’d just been fined by the officer.

“The [officer] did tell her that it was something about complaints, local complaints,” said Jan Naylor. “So we rushed down and spoke to the guy. We said, ‘complaints about what?’

“We don’t really know what the complaints are about, who complained.”

The only complaint Naylor could think of would be related to parked cars near the trail, but even then, couldn’t grasp who’d be lodging them.
Naylor recalled that even when she was conversing with the officer, she advised a cyclist that police were fining people, but he continued nonchalantly.

Pemberton Mayor Mike Richman, who has been involved in the negotiations and is also an SLRD director, was blunt when asked if there’d been any progress.

“I wish,” he said. “It’s been an ongoing issue and it’s something that I’ve brought to CN representatives through the Village on a number of occasions and developed a good working relationship, actually.

“I had some high-level executives come up and I have walked the area with them, and explained that that crossing is not going to go away, just because of the geography.”

The SLRD has a tenure application for the Bathtub Trail area of the park.

“Once we have that further along, we plan on contacting CN and saying, ‘The parks are standing there. We support this. How do we work through it?’” said Richman. “It’s a brilliant little trail network and there’s tons of beautiful river access there.

“It should be a publicly accessible beautiful recreation area, so we will continue pounding on that door.”

Richman said CN often comes up to “make a mess” of the trail to prevent access, or to ticket pedestrians and riders, as a deterrent. He feels neither approach is an effective solution and he’s pushing for some form of alternative access to the park.

The track isn’t particularly active at this time, as since April, the Squamish-to-Williams Lake line has been suspended, with all trains between Vancouver and Prince George rerouted through Kamloops. The Canadian Transportation Authority (CTA) said in an email on Dec. 4 that if CN wished to discontinue the line, it would need to do so as part of its three-year network plan.

"CN has not notified the CTA of the discontinuance of this line. CN’s Three-Year Rail Network Plan as posted on their website indicates that the Squamish line is being retained," the CTA spokesperson wrote.

In a Dec. 8 email CN clarified and stated: "The service suspension was not a track discontinuance, which means that both ad hoc freight and passenger trains continue to use the line. CN maintains the track, continues with inspections, repairs and meeting all safety requirements, as required for an active line, including being patrolled by CN Police for illegal trespassing."

Local MLA Jordan Sturdy has long had an interest in the efforts to secure a crossing, first as the Village’s mayor and now in his current provincial role.

With train activity on the track at a minimum, Sturdy wondered why the company would use its enforcement resources there.

“It’s a bit of a mystery to me why CN would be enforcing the prohibition right now given that the subdivision, that line, is in abeyance right now,” he said. “I’m really surprised that they would find that enforcement is a priority right now.

“Obviously, that doesn’t solve the longer-term issue, but it does raise the question of what the intention is with the line north of Squamish.”

Like Richman, Sturdy said past discussions with the railroad’s Western Canadian representatives were positive, but since the company implemented new leadership in the region in 2019, there haven’t been any recent talks. He noted that the Union of British Columbia Municipalities convention in September normally would have been a chance to touch base, but that was not possible due to it being held virtually.

CN did not respond to multiple requests for comment before Pique’s deadline. The company put out a press release in the summer, however, reiterating that trespassing on tracks is illegal and could result in a $115 ticket while reminding members of the public to cross only at designated public crossings.

In 2018, in response to a similar request for comment regarding public use, CN said in a statement: “Trespassing on CN tracks or other infrastructure, including the bridge over the Lillooet River, is not only illegal and subject to fine, but also extremely dangerous.”