Coho count up on the Cheakamus 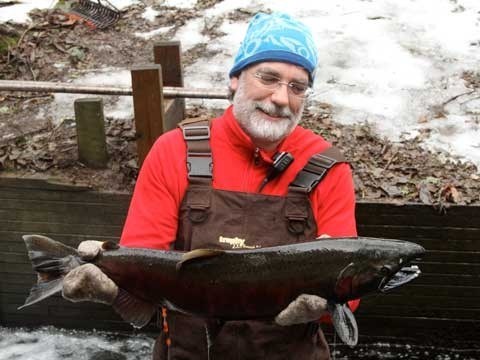 Walking along the tree-rimmed tributaries off the Cheakamus River in rural Squamish, it's possible to see flashes of dark ruby red and grey among the smooth dun rocks of the river bottom. Healthy Coho salmon, ripe with eggs and milt, have returned a month earlier than usual to spawn in record numbers.

The count is approximately 10 times higher than in previous years and their presence is being greeted with rapture from the local bald eagle population, whose individual members hover in solitary dedication among the evergreen boughs above the riverbanks. It's likely that the appearance of the Coho, which prefer smaller, quieter tributaries to the main river, will move eagle populations into the forests just offshore the main banks of the Cheakamus.

"Salmon are a critical component to this environment, to this ecosystem, we see a lot of activity around it scavenging the bodies," said North Vancouver Outdoor School (NVOS) principal Victor Elderton. "Nature works in strange and mysterious ways so we had expected a really healthy Chum run and it was less than expected and this week has been a phenomenal week with the Coho, it's been a real shock. As to what happened and why? I have no idea."

Surprise is a relative term for staff at the NVOS in Squamish's Paradise Valley. They're mostly concerned with ensuring the 5,000 students that use their programs are cured of their nature deficit disorder, a term coined by author Richard Louv in his book Last Child in the Woods . The school runs a hands-on mini-hatchery to improve fish stocks and educate primary grades from all over the Lower Mainland about the importance of species preservation and proliferation. At this time of year a special trap on the river usually corals only a handful of Coho but the results were different come early December.

"Yesterday we had 65 salmon come into the trap," continued Elderton. "In a normal year we would usually raise around 30,000 Coho salmon. This year we've already collected over 60,000. We normally would have only a very few at this point in the fish hatchery, we wouldn't usually start to see Coho until the beginning of January. Everything seems to be shifted a little bit anyways, we don't know whether the fish are coming earlier this year or if they're going to continue to come over the same time period as they have in previous years."

NVOS is in the middle of the Dave Marshall Salmon Reserve, which contains over 14 kilometres of winding, re-enhanced salmon spawning river channels that flow off the Cheakamus. The school is situated on 400 acres of wilderness and beyond the hatchery and river focus, also offers agricultural systems and First Nations education programs. BC Hydro provides much of the funding for river maintenance, fish populations data, and a good part of NVOS's hatchery infrastructure.

While the majority of fish utilizing the area for reproduction are left to do so naturally, a small number are taken into the student-run mini-hatchery to be raised by hand. Donning waders, the students take turns standing waist deep in the rushing river water to net the salmon, which are then transported to tanks at the nearby hatchery facility.

The females are killed and their eggs transferred to buckets. The live male salmon are separated from their milt, which is used to fertilize the eggs, before they are returned to the river.

The fertilized eggs are put in trays submerged in fresh river water for around three months until they turn into alevin. When the alevin morph into carnivorous fry, they're moved into troughs outside the hatchery until they reach a weight of 0.8 to one gram, at which point they are released back into the river.

At all stages of the cycle, which starts in September and ends in June, students count, track, feed and weigh the fish to determine health and ensure that they are reaching appropriate benchmark development.

"We do it on a small scale but essentially this is real life. When people come and see what the children are doing in the hatchery they're just shocked. You've got eight- and nine-year-olds doing the jobs that they have," said Garry Cotter, a NVOS teacher who runs the hatchery program and is clearly dedicated to both the students and the fish.

"The most important thing here is that we want kids to develop an emotional connection to nature and they come up here and have a positive experience and unless children develop some kind of emotional connection with natural systems, as adults they won't have an environmental ethic and try to preserve some of the environment, so it's critical."

Each fish can produce 2,500 to 3,000 eggs, but in the wild only 300-500 will actually make it to the fry stage and have a fighting chance to make it to the ocean. Out of that number only 10 per cent will grow to adulthood and only two or three fish will actually return to the river to spawn. Fish raised in hatcheries have a much higher chance of withstanding natural predators ­- 97 per cent of the eggs turn into fry and between 20 and 30 per cent will return to the river to spawn.

"In a perfect world we wouldn't have to have hatcheries because this river did an excellent job producing salmon for a long time. But we have a dam on it, we built dikes on it, we've had forestry practices - particularly in the '60s and '70s - that were damaging," continued Cotter.

"The hatchery is a perfect example of where humans have made mistakes and we've damaged the environment and this is what we can do to fix some of those mistakes. So it's showing that humans cannot only have negative impact on the environment but positive impacts.

"I think if you're teaching young children about the environment you need to teach them a positive message, that it's not all doom and gloom. And you have to say if we change our behaviour and we do certain things we can make the world a better place and that's a really important message we try to get out."

At NVOS, as in nature, life and death are closely intertwined and so students are taught the intricacies of life cycles in the forest. The salmon feed other predators, both terrestrial and aquatic. Their flesh is taken back into the soil to strengthen growing trees, which in turn shade the glacial-fed rivers and keep them cool for fish to prosper. Students learn that though humans have caused great harm to the natural environment, they can also mitigate the damage.

Larger mysteries, like why this year's Chum run was sparse and the Coho flush, remain unexplained but NVOS educators believe wholeheartedly that providing students access to these wild places will lead to a more enlightened public, which may eventually unlock the mysteries still prevalent today.