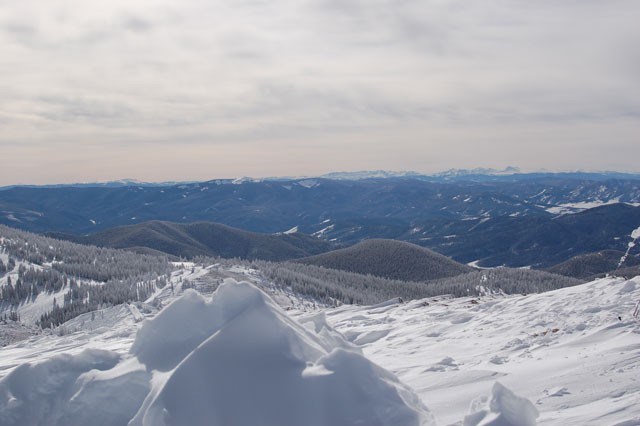 Living and skiing in Whistler for the past 16 years have had two very predictable effects. I’ve become a better skier — there are, of course, those who would challenge that statement — and I’ve become a cold temperature weenie. I don’t do cold well and the Ski la Vie tour has driven that fact home with numbing certainty.

Cold encourages a much finer powder snow, that much is irrefutable. The massive storm that buried much of California’s Sierras was unusually heavy and damp when it made its way to Colorado, at least by local standards. But the cold temps still managed to dry it out and fluff it up to a consistency that would bring tears of joy to the eyes of most Wet Coast skiers.

The Ski la Vie tour has been frozen in temperatures way too close to zero degrees Fahrenheit since it began, dipping below that bone-chilling number on more than one occasion and spending an uncomfortable number of days with highs in single digits. Even with John Smart’s gracious insistence I pack along a much warmer, more insulated SMS jacket than any of the technical shells hanging in my closet, there have been days when my mind’s wandered to a warm beach while my body tightened up on a pokey chairlift.

Toes that are never cold in touring boots have lost feeling more days than I can remember. Fingers that normally fly over a keyboard have barely been able to keep a grip on poles. And there have been comical interludes where words have formed in my mind but never made it to my frozen lips or managed only to squeak out as one elongated vowel movement.

Yesterday’s ride up the Imperial Express SuperChair at Breckenridge came with a leisurely, complimentary dermabrasion session for the right side of my exposed cheek and chin. Powerful winds, blowing snow, bits of grit from somewhere west of here sanded off the dead skin cells and left ruby red, burning new skin in their place. My complexion never looked better… at least on that side of my face. I gave passing thought to standing atop the mountain and exposing the other cheek for an equal period of time but decided skiing fast down the bowl might have about the same effect. Maybe one of these days I’ll remember a neck gaiter.