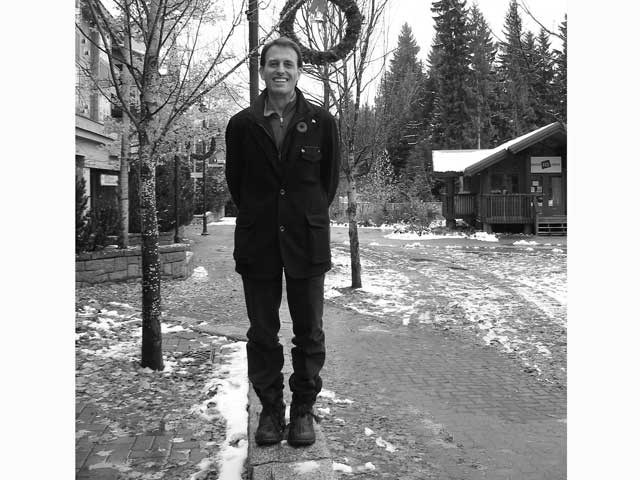 By Paul Carlucci and Claire Piech

While the rest of the country loudly prepared for the arrival of Barack Obama last week, the Sea to Sky corridor quietly did the same for local MP John Weston, who came to promote his government's $258.6 billion budget and $40 billion stimulus package.

It wasn't the most sensational of appointments, perhaps, but he did bring a giant novelty cheque to Brennan Park in Squamish, where he sang the praises of the 2009 Conservative budget, calling it the "economic action plan" needed to see the country through tough times.

In addition, he said, there's also a green infrastructure program, worth $1 billion over five years. He took special note of the small craft harbours program, which could potentially see the Mamquam Blind Channel dredged should Squamish's application be successful.

Whistler could also benefit from the green infrastructure program, said Weston, who met with Whistler's council and mayor on Feb. 20, in a closed-door session. The details of that program are vague, but sustainable energy is a candidate, he said.

"There's also the second round of something called the Building Canada program," Weston said. "That's the biggest infrastructure program since World War II."

In the first round of Building Canada, Whistler applied to get money to construct a sewer collection system for residents on Alta Lake Road, also known as Westside. That application marks the 10th year the municipality has tried to get funding for the $4.2 million project.

As Weston met with councils and mayors throughout the corridor, he said he heard a clear call for open and ongoing communication.

He noted, the second round of Building Canada began on the day of his visit.

The issue of the budget and stimulus funding was top of mind. Communities across the country will be looking to access budget provisions - and there will be many failed applications as a result. Fast-flowing communication corridors, between all levels of government are therefore crucial to success in the riding.

"After all, we're going to be competing with Saskatoon, Halifax and every other community across the country to participate in this level of funding," he said, "and I think it's the administrations and the public servants that can work together and nimbly respond to these new programs, that can understand the needs of constituents that are going to get the best benefits for their citizens."

Whistler's mayor and council, for one, are stressing how Whistler's needs are different from their Olympic needs. Over the last few years, the Whistler area has received funding from both the province and the federal government in preparation for the 2010 Games.

Meanwhile, Conservatives and Liberals are both saying the budget must be passed as soon as possible to get the money out of Ottawa. But the Bloc and the NDP are warning of other measures wrapped into the bill, things like pay equity.

Weston could not clarify how long it would take the stimulus package applications to be processed, but he said it should happen "quickly."

"The timeline will be more evident when we see the application."

Weston also came with a cheque in excess of $1 million for the Squamish Lillooet Regional District. Presented at Brennan Park, the funds come from the gas tax and will go towards the Corridor Trail, among other transportation-themed initiatives throughout the regional district.