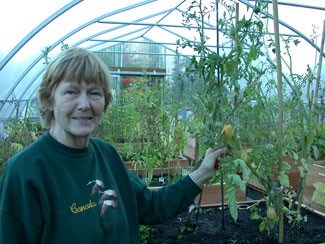 The first summer of Whistler’s Community Greenhouse project has been a great success.

More than 50 families enjoyed the fruits of their labour and Whistler’s food bank got fresh vegetables every week all summer long.

"…It was great to get the vegetables," said Sandra McCarthy, food bank co-ordinator.

The food bank got, on average, two 10-gallon buckets of vegetables each week from the Community Gardens Project.

The beans, tomatoes, cucumbers and other goods were snapped up by those in need. Indeed, said McCarthy, she could have given away lots more vegetables if they had been available.

"I know the project was just feeling things out this summer and I’m hoping there will be even more available next year," she said.

"It was really good for the kids. People were overwhelmed by it. They just couldn’t believe it and they thought it was pretty special and they loved that it was organic."

The Community Gardens Project was the brainchild of local psychologist and citizen of the year Dr. Stephen Milstein.

"Everyone was stunned by how much things grew," said Milstein, who has his own prolific greenhouse at home.

There were hurdles though as the project got up and running.

The irrigation system at the Myrtle Philip greenhouse got plugged by minerals in the water, forcing growers to resort to hand watering.

However, the golden lining to this problem, said Milstein, was that the high mineral content of the water meant condensation on the inside of the plastic turned the roof and sides opaque, protecting the plants from the burning heat of this summer’s intense sun.

Indeed the project is planning on fundraising to replace the clear plastic greenhouse domes with opaque ones for this reason.

Ventilation was also an issue this summer said Milstein. For the coming growing season he hopes to fundraise then install large fans at the ends of the building instead of having to get volunteers to lift and lower flaps along the side of the greenhouses everyday.

The soil will also get a boost with some organic manure for the coming season, to help increase the productivity of the soil.

To date there are three greenhouses, two at Spruce Grove and one on the lower field at Myrtle Philip school, which this year was dedicated to growing food for the food bank. Each is 20 feet by 40 feet and holds 18 raised boxes.

What thrilled Milstein about the project was the way it got people together from all over the community.

"It helped create community," he said. "It had tremendous value in connecting people as well as growing vegetables."

Milstein is hoping to get things going again in the greenhouses in April 2005. This summer families paid $50 for their box and seed and set-up. The costs may go up a little next year, said Milstein, but the whole idea is to keep it affordable and let everyone participate.

Anyone interested in growing a garden for themselves and the food bank (a percentage of all the vegetables are donated to the food bank) can contact the Whistler Communities Services Society at 604-932-0113.

There were concerns that wandering bears might help themselves to the produce, but Milstein said there wasn’t a single incident.

"We knew of six bears living in the Spruce Grove area," he said. "And we saw them and they walked right by."

The secret, said Milstein, is in what you plant. Gardeners should stay away from corn, melons, pumpkins and berries.

It’s estimated that each greenhouse cost about $11,000 to set up this year, much of that was donated in volunteer time and goods by people like Kevin Smith, who helped out with the heat tracing system to keep the soil warm and extend the growing season. Green thumb experts such as Tyler Mosher also lent a hand, as did hundreds of others in the community said Milstein.

"It has truly been a community builder," he said. "And of course we couldn’t have done it without the municipality."

The gardens tie into the municipality’s quest for sustainability and Milstein hopes next year there will be even more and bigger greenhouses in the works.

Meanwhile the food bank has also expanded, moving into a much bigger location in a portable beside Our Lady of the Mountains church.

"It feels about five times the size of the old location," said food bank co-ordinator McCarthy, who was surprised and thrilled when volunteers showed up recently to renovate the portable.

"I am so grateful for the response and it just made everything so great," said McCarthy.

Along with the bigger facility there are now three fridges to store perishable goods.

McCarthy is gearing up for the busy season, which usually starts in November. Demands on the food bank have been reduced the last couple of years, she said, "but I have to be ready to help about 160 people in the two hours (we are open)."

On Monday about 30 people came in for food hampers.

Anyone who needs food outside of regular hours (it is open the first and third Monday of each month from 11 a.m. to 1 p.m.) can call 604-932-0113. If you have perishable donations you can also call the same number to get them picked up or to arrange a drop off.