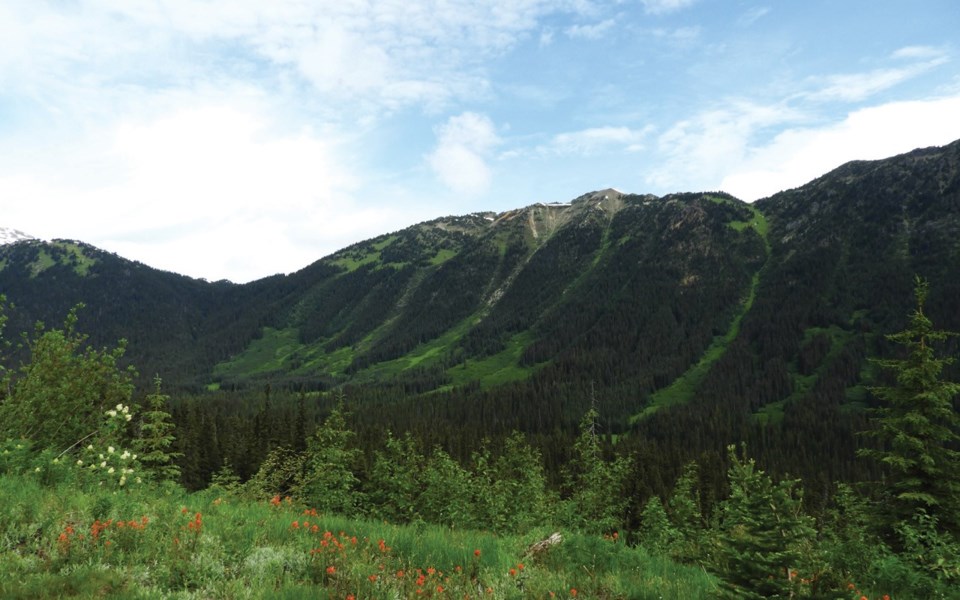 Road closure The province implemented seasonal closures on the Lillooet South Forest Service Road in order to safeguard terrain like this, located in the upper end of Tenquille Creek, for grizzly bear recovery. Photo by Tonette McEwan

The Conservation Officer Service (COS) has handed out 16 tickets—totaling more than $8,000 in fines—to 14 people for accessing the area Lillooet South Forest Service Road (Lillooet South FSR) by motor vehicle on a single day last month.

The fines were given to the occupants of four pickup trucks and two ATVs on Oct. 26, according to a COS Facebook post.

Conservation officers were patrolling the area to enforce Motor Vehicle Prohibition Regulation under the B.C. Wildlife Act, said the post.

The province instituted two seasonal closures on the Lillooet South FSR beginning in 2018 after conservation groups advocated for the change, and a comprehensive study spelled out the importance of the area to grizzly bear recovery. (The area is favoured by bears for its huckleberry patches and salmon fishing.)

The road is closed to motor-vehicle traffic (hikers and First Nations motorists can still enter) from April 1 to June 15 and Sept. 16 to Nov. 30, beginning at the two-kilometre mark of the road.

A similar temporary closure has been instituted for the Birkenhead Lake Forest Service Road (starting near the 14-kilometre mark) from July 15 to Oct. 31.

"Basically, we want to make sure that we're giving the bears the space that they need during sensitive times to decrease the risk of human encounters," said conservation officer Brittany Mueller.

The area has loads of high-energy food and is "core habitat" for grizzly bears and cubs, she added. "It's definitely a very sensitive area for grizzly bear movement and other wildlife."

The main draw for the area for humans remains the Meager Creek Hot Springs, said Mueller, noting that the area has been closed due to "health and safety" reasons since 2010.

"It's just not a safe place to be," she said, adding that people who enter a closed recreation areas can face a $115 fine.

Mueller added that the Lillooet South FSR was upgraded following the catastrophic 2010 Mount Meager landslide, and that while it remains a challenging drive, it is now drawing more people than ever.

"The closure is in place to help limit the number of people during the sensitive times," said Mueller.

Enforcing FSR closures on any road is difficult in the corridor, said Allen McEwan, president of the Pemberton Wildlife Association.

There is actually a gate on the FSR that remains closed, he said, meaning that people have three options to get past: break through the gate (something McEwan said he's seen before), go around, or use a key.

Going forward, the public needs to be educated about the importance of the closure for grizzly bear recovery, said McEwan, adding that everyone he has spoken to about it is "quite understanding" and willing to comply.

There will, however, always be an element "who doesn't care about wildlife," he said, adding that he believes it to be a "small portion" of the overall population.

McEwan said he would like to see more enforcement of road closures in the corridor, but acknowledged that that could be challenging given current COS staffing levels.

"When we bring the laws in as a government, then they should be enforceable," he said. "It's just a matter of whether we have the staff and the manpower to do that."