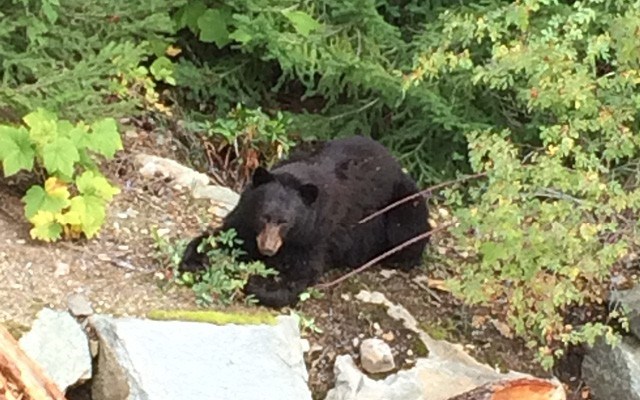 berry KING A bear digs into a small berry bush in Alpine Meadows. Researchers are hoping to use local data to find more effective ways of managing bear-human conflict. photo by steven turner

Researchers from UBC Okanagan and Margo Supplies are taking a new approach to studying human-bear conflicts, using Whistler as a case study — or at least, a simulation of Whistler.

"My research team has developed a model that simulates the movement of individual bears on the landscape," explained UBC Okanagan's Dr. Lael Parrott.

"So it has rules about how a bear forages, and what attractants on a landscape might drive it to go in one direction or another... we have all kinds of info about the vegetation cover around Whistler and things like that, and also locations of buildings and things in the town, and then we use the model to simulate how a bear will move on the Whistler landscape."

Using the model, researchers will be able to test the effectiveness of different scenarios, like strategically placed electric fencing or bear-proof garbage cans.

"The objective is to create a comprehensive, community-scale planning tool that can help communities look strategically at the scale of their community, and what kind of bear deterrent measures would be most effective in (reducing conflict)," Parrott said.

"Our key objective really is to reduce the number of problem bears that ultimately have to be removed, and to keep them wild."

Margo Supplies, which sells wildlife conflict management products, is working with Parrott's team on the project.

"We'll keep running (the simulation) and find out what works the best, and also what makes the most sense from a practical point of view. So we're adding things like cost, both of management strategies as well as cost of a conflict bear should those strategies not be in place," said Margo's communications director Jared Marley.

"So we'll be able to both forecast how the bear population will respond to different strategies, as well as what those strategies will cost in real terms."

The project has federal funding through the Natural Sciences and Engineering Research Council Engage Grant program, secured by Parrott.

The simulation works by assigning numerical values to certain aspects of the Whistler ecosystem — like food sources for bears, and the likelihood of repeated visits to such sources.

"What we do is each cell in the model will have a food value, both natural and non-natural food and a couple other things, and then there's other values such as the power of return," Marley said.

"Essentially we're trying to codify the basic functions of that ecosystem."

Researchers at UBC Okanagan have found that in Whistler, for every one per cent of the population educated in BearSmart practices, there was a five-per-cent decrease in the probability that a bear would become a conflict bear, Marley said.

Whistler was chosen as a case study for its wealth of data and its "complex bear problem," Marley said.

"There's been a lot of positive work done, but there still is a lot of conflict, and part of that is it's a growing community," he said.

The plan is to refine and simplify the model, eventually turning it into a new tool for communities managing wildlife conflicts.

"We do have a fairly good tool belt of non-lethal tools," Marley said.

"Really we're taking what we're good at and trying now to create a way that we can actually plan and help assist in the planning and budgeting for this."

Researchers are hoping to share results from the model next spring.

Two adults suffered minor injuries last week after a medium-sized black bear attacked them in the yard of a residence in the Garibaldi Estates in Squamish.

The couple — a man and a woman — were sitting on the steps of their home at the time of the attack on Thursday, Oct. 6 and received cuts and bruises.

The Conservation Officer Service (COS) responded to the call and set a bear trap, though they weren't initially able to capture the bear.

A bear matching the description was later trapped on Saturday.

COS described the attack as territorial in a social media wildlife alert put out by the District of Squamish.

Vanessa Isnardy, the Squamish community co-ordinator for Wildsafe BC, said the conservation officer who followed up told her the bear charged the two.

"They didn't have a lot of time to react," Isnardy said. "It wasn't defensive because they weren't doing anything to antagonize the bear. It is unusual, but we are seeing a lot of bear activity in the community. We are seeing 15 individual bears that we know of that are active in Squamish, so there have been a lot of sightings."

"It's a very busy black bear year, and a lot of them are around fruit trees," Isnardy said.

Bears need up to 20,000 calories per day to prepare for hibernation. Many have been drawn into residential areas by fruit trees and unsecured garbage.

Territorial behaviour can occur at this time because fruit trees are no longer producing fruit and there is more competition for limited food sources, the post added.

The COS recommended that caution be used on trails and that children be supervised at all times. Garbage and organic totes should be stored indoors, and any fruit remaining on trees should be harvested.

More information on bear safety and reducing conflict can be found on www.wildsafebc.com.