Road building estimated to take four to six weeks to complete
Apr 11, 2016 8:00 AM By: Brandon Barrett 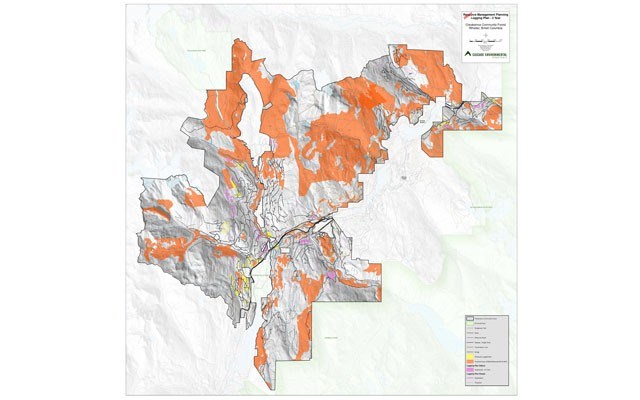 LONG HAUL The one- to three-year harvest draft plan for the Cheakamus Community Forest is pictured. Image submitted

With forest harvesting set to begin this spring near Cheakamus Crossing, construction on a one-kilometre access road close to the residential neighbourhood started this week.

Building at the site, located southwest of Cheakamus Crossing approximately three kilometres from the turnoff to Jane Lakes Forest Service Road, began April 4 and is expected to take four to six weeks to complete.

Traffic and noise impacts are expected to be minimal, with trucks accessing the site from Highway 99 at Function Junction by travelling on Cheakamus Lake Road to Legacy Way before turning right onto Jane Lakes Road.

The work will also require some blasting, according to the Resort Municipality of Whistler, which will be restricted to the hours of 8 a.m. and 8 p.m.

"We just have to see how they handle it," said Cheakamus Crossing resident Adam Protter. "If (foresters) space out the work and try and do it in daylight hours without creating hardships for people who have paid a lot of money to move into this neighbourhood and live here, then I think it's fair."

The access road is being built in preparation for harvesting this spring in the Cheakamus 16 block of the Cheakamus Community Forest (CCF), expected to yield approximately 6,000m3 of wood. The logging will require five forest openings ranging from 1.7 to 6.5 hectares in size.

Log hauling will begin once the road is complete, with five trucks making two trips per weekday for 12 to 15 days in total. The speed limit for logging trucks on the gravel road is 30 km/hr. Safety signage will also be erected along the road where driveways, trails and other access points meet.

Logging in Block 16 was previously deferred until a long-term harvest plan was in place for the CCF and the entire valley.

The report was unveiled at an open house in February, and includes plans to harvest other areas of the Cheakamus Valley in the long term.

That number was set to make up for the low amount of timber harvested in 2015 — roughly 5,000m3 — and allows for flexibility to accommodate shifting weather and market conditions, CCF operations manager Tom Cole told

Foresters will also complete some wildfire fuel thinning in the valley similar to work that was done near Millar's Pond last year. That work, expected to begin in 2017, will include the creation of a fire-break zone near the Riverside trails in Cheakamus Crossing.

Initially, Protter was concerned with the impact the work would have on sightlines in the neighbourhood, but ultimately grew to understand the need for fuel thinning near his unit in the Whitewater complex.

"It's going to suck that it's going to get it all thinned out," he said. "But since that (open house in February), I have learned to understand the reasons behind it, and in the cold light of the day, the fact is that a fire could be triggered in this neighbourhood, so it has to be done. It's short-term pain for long-term gain."