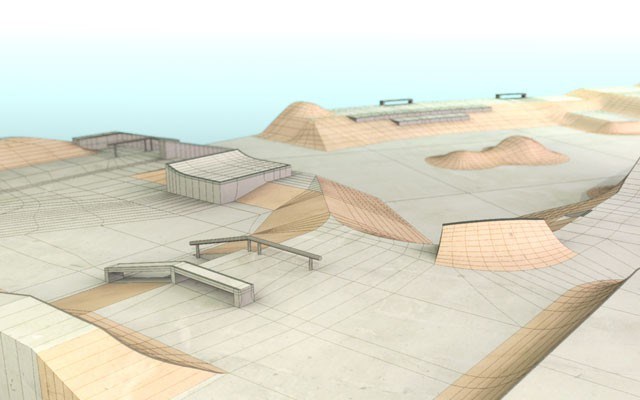 KICKSTART An artist's rendering of a portion of the third phase of the Whistler Skate Park rejuvenation project. Image submitted

With a planned opening date of early summer, work has resumed on the latest phase of the Whistler Skate Park.

Construction is slated to begin again early this month, with plans to pour concrete once the ground has been given a week to thaw in favourable conditions. The RMOW is urging the public to avoid skating at the park, located near the day lots along Fitzsimmons Creek, before the concrete has had a chance to set for up to 21 days. Skating prior to this can permanently damage the park’s surface, the RMOW said.

“Skaters and members of the public are asked to respect all construction fences and signage for their own personal safety and project efficiency. This will be critical once all the concrete is poured,” said Mayor Nancy Wilhelm-Morden in a March 31 release.

“Skaters are asked to help protect the concrete during the curing process by self-policing and keeping in mind the bigger picture — we all want to see the successful completion of this exciting project and its use by skaters of all ages for many years to come.”

The latest addition to the park has been underway since 2014. The design was undertaken by North Vancouver-based Spectrum Skateparks Ltd. after extensive consultation with the public and has “evolved to be less about quick hits down some stairs, and more about really long lines, being able to hit multiple ledges, all while pumping and flowing for speed,” according to the municipality. Phase 3 of the park will be built in Rebagliati Park between the existing Phase 2 portion of the park and the Valley Trail.

The RMOW said it would provide updates on construction as they become available, as well as details about a grand opening event.

The Whistler Skate Park Revitalization Project is funded through $807,000 in provincial Resort Municipality Initiative funds and a $100,000 donation from the Whistler Blackcomb Foundation.