Connection from Alta Lake Road to Function Junction to be completed by October
May 28, 2020 12:00 AM By: Braden Dupuis 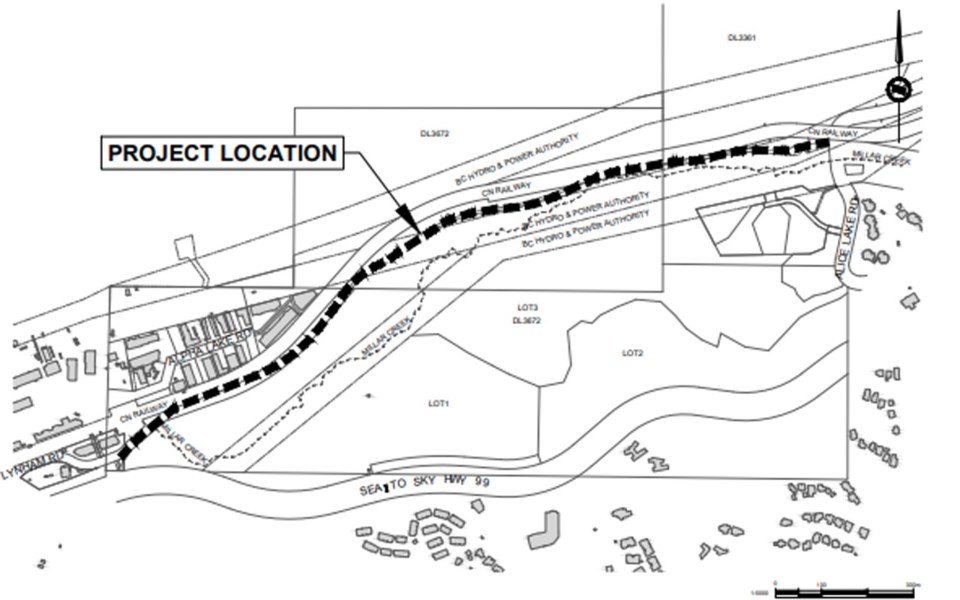 key connection A new Valley Trail connection that will link Alta Lake Road to Function Junction is set for construction this summer. image courtesy of the rmow

work on an important Valley Trail connection is set to get underway after Whistler council awarded a contract worth $1.5 million to Capilano Highway Services for the project at its May 26 meeting.

The 1.8-kilometre stretch of lit, paved Valley Trail will connect Alta Lake Road to Lynham Road at the east end of Function Junction, serving as an active transportation route for workers—and as a secondary evacuation route in case of emergency.

"In the event that the highway is closed down in that south end of town, the trail is load rated for traffic and for fire truck loads," said capital projects manager Tammy Shore in a presentation to council.

"So it's an important evacuation route for the south end of Whistler."

Included in the contract is work to upgrade a sewer trunk, including raising 16 manhole elevations above flood levels and providing access for maintenance.

"The benefits of doing this part of the sewer trunk upgrade, the manholes, is to prevent infiltration into the trunk so we don't have to deal with increased volumes at the wastewater treatment plant end," Shore said.

"And it also reduces the occurrence of these manholes getting flooded out and having an effluent spill into the water courses, being Millar and Sproat creeks. That's not a good thing when that happens."

The total two-year cost of the project—including all administrative costs, bridges over Millar and Sproat creeks and a 10-per-cent contingency—is $2,132,875, all from provincial Resort Municipality Initiative funds.

Councillor Duane Jackson asked several questions related to the cost following the presentation, including (but not limited to) the funding split between project budgets, the cost of the lighting and the source of the gravel used.

While it's a good investment to build the "critical" trail, and he didn't intend to question the tender, "the tender went out prior to oil prices crashing and COVID, and everything else, and technically, based on the budget that was presented to us, it was over budget," Jackson said.

"So is there an opportunity to either retender it, or go back and negotiate given that it's over budget?"

It's a great question, but not a good trend to set, Shore said.

"[If] you cancel this tender we posted, we could potentially get fingers pointed to us for bid shopping," she said. "It doesn't look good, and I think that we're already at a fair market value—you don't want to be accused of giving advantage [to] vendors that come in and undercut others because they're desperate for work."

Capilano was the lowest of five bidders, narrowly edging out Corona Excavations by just $22,780.

"I feel like we had a very good health check there, on the market," Shore said. "I think we got a very good price for the project."

The project team has also applied for a BC Active Transportation grant worth up to $500,000 to offset the costs (recipients are expected to be announced in the coming weeks).

"Ever since we acquired this property, this project, for me, has been a really important piece to transportation, recreation, fire protection, and the list goes on," said Mayor Jack Crompton.

"So I'm eager to see it completed."

Work will start in June and is expected to be completed in October, with intermittent trail closures expected throughout. Project updates will be posted to whistler.ca.