Cops for Cancer roll into Whistler 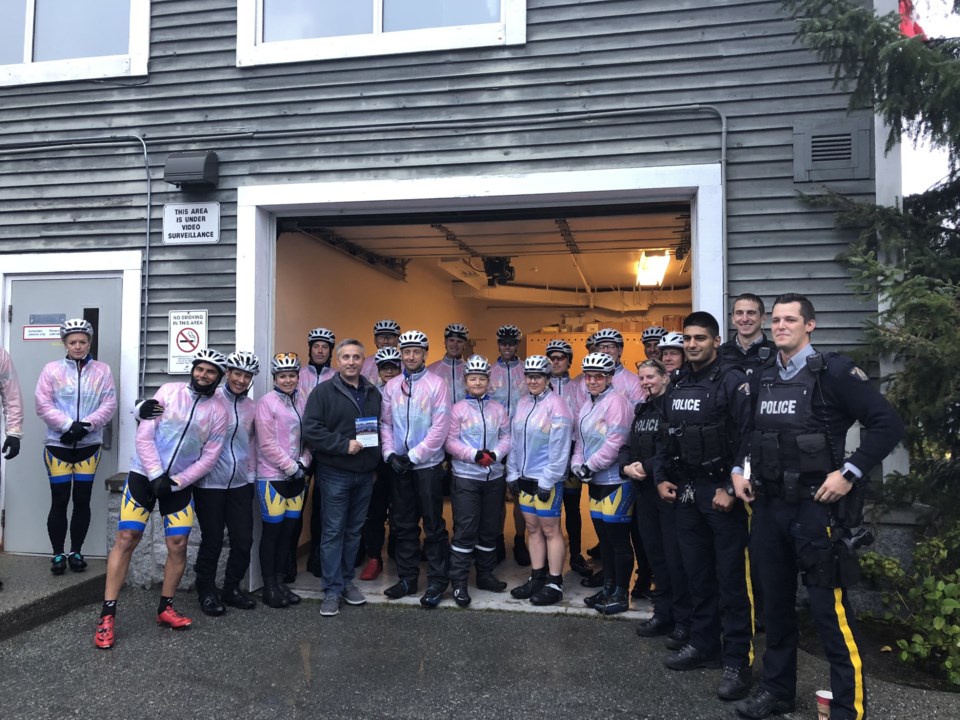 Since Wednesday, Sept. 19, Whistler RCMP watch commander Cpl. Nate Miller hasn’t been in to work at the detachment.

Instead, he’s been on his road bike, pedalling up to eight hours a day—despite the torrential fall rain that’s washed over the south coast for the past week—all to support the battle against pediatric cancer.

“It’s going great so far. A lot of rainy days, but hopefully it’s going to get a little drier for us here,” he said, during a brief stop in Whistler on Sunday morning, Sept. 23. “But it’s part of the experience, right?”

Miller is representing Whistler’s RCMP detachment in this year’s Cops for Cancer Tour de Coast ride, one of four tours taking place across the province. The nine-day, 800-kilometre tour sees municipal police and RCMP officers, along with other emergency services staff like border officers, paramedics and transit police, pedal their way through Vancouver and the North Shore, the Sunshine Coast, the Sea to Sky corridor as well as other cities in Greater Vancouver from Maple Ridge to Richmond.

Miller, along with the Tour’s 36 other riders and their crew, received a warm welcome when they rolled into the Whistler detachment’s parking lot early Sunday morning, on day five of the ride. The 39-year-old watch commander said he was “stoked” to be back in Whistler, where his family and watch officers were waiting to cheer him on.

The riders stopped for about 10 minutes before hopping back on their bikes to head up the highway to Pemberton, where they’ll stay the night before heading back to the Lower Mainland on Monday.

“On certain days like today, it’s actually a lot of riding. Last year on this day we did about 120K,” explained Ninon Daubigeon, a staff partner and annual giving officer with the Canadian Cancer Society.

According to Miller, so far the ride’s been more challenging than he expected. “I mountain bike tons, so I thought, ‘Oh, I think I’ll be fine,’ but when you’re five or six hours on the saddle on a road bike, (it’s tough for sure.)”

That, and thinking about the cause behind the ride.

The initiative raises money for the Canadian Cancer Society, which supports both cancer research and caring support programs for families and children battling the disease. So far, the Tour de Coast crew has raised $515,816.21—98 per cent of their $525,000.00 goal. Miller has raised $10,000 of that total.

Throughout the journey, the group will be stopping in at detachments and businesses that have lent support to the cause, hosting community dinners, as well as visiting schools that have engaged with the program. “We do a lot of cancer awareness with the kids and healthy living messages,” Daubigeon explained.

“We’re so lucky, every single community we go to there’s so much support from the community,” she continued. “These 37 riders, as well as the crew, are very dedicated and they spend a lot of time fundraising and training to be on tour, but it really wouldn’t be possible without the caring communities that back them up.”

Miller agreed that, “It’s really cool when you come through the communities and you see everyone supporting you and you get to meet some of the families and kids that are battling cancer. It kind of brings it all together. It’s really nice to see their stories.”

To donate, head to www.tourdecoast.ca. There, you can also find a link to donate directly to Miller’s individual fundraising page.