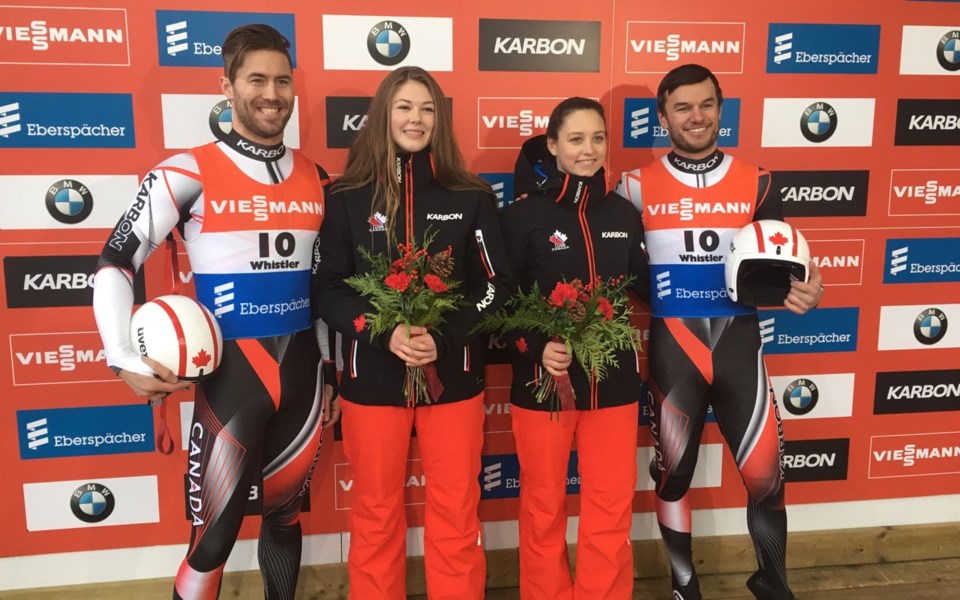 Natalie Corless and Caitlin Nash made history at the Whistler Sliding Centre on Saturday.

The Whistler 16-year-olds successfully completed both runs of the Viessmann FIL World Cup doubles event, finishing 22nd out of 23 sleds, as one sled did not finish its second run. In becoming the first-ever women's sled at the World Cup level, the pair was 2.695 seconds behind winners Toni Eggert and Sascha Benecken of Germany. Tobias Wendl and Tobias Arlt, also of Germany, took second and Vsevelod Kashkin and Konstantin Korshunov of Russia were third.

Corless said after the race that she was still soaking in the experience.

"It hasn't really set in. It was awesome doing this at home. We completed our goals, had good runs, had fast starts, had fast times," Corless said.

Nash, meanwhile, said her World Cup debut will stay with her forever.

"It was great hearing our friends and family cheering through [Corner] 16 and coming up the outrun. It's something we're never going to forget," Nash said. "We just wanted to be consistent and I think we proved that we are capable."

When sitting in the start, both sliders said they were glad that they were premiering in a doubles race so they could enjoy the experience together.

"We feel like we have a good support system between the two of us. We rely on each other. We're good friends, so that really helps us a lot," Nash said.

This will be the pair's only World Cup this season, but they have other major events on their calendar, including the Youth Olympic Games in Lausanne, Switzerland next month. Nash and Corless found out they had qualified last week

The other Canadian sled, Tristan Walker and Justin Snith, was sixth, 0.392 seconds off the lead. Walker explained that they had mixed emotions about their day.

"We're really happy with our performance, a little disappointed with the result. The starts were awesome ... podium level starts. The runs were as close to perfect as you can in the sport of luge, so I think we need to take a look at how the sled's running a little bit," he said.

When trying to square the feeling of having two strong runs with finishing lower in the table than they felt they deserved, Walker said he and Snith try to "control the controllables."

Walker said it was an honour to be present to watch fellow Canadians in Nash and Corless make history here in Whistler.

"We are really proud to call them our teammates. It was awesome to see history get made like that. Hopefully it's a push in the right direction to get the women their own category," he said. "There was a sled there that they almost got, which was really impressive."

Canadians struggled in BMW Sprint World Cup competition to wrap up the weekend, featuring the top 15 finishers from the regular World Cup races in the weekend. The top result came from the Walker and Snith sled in the doubles race, as the duo took 13th. The podium was unchanged from the World Cup contest, as Eggert and Benecken earned the win over Wendl and Arlt, and Kashkin and Korshunov.