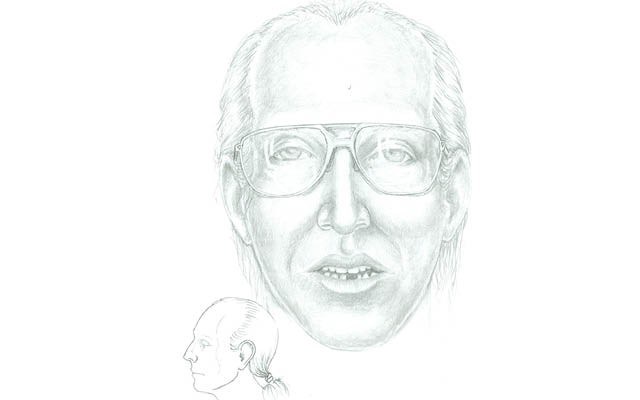 Unidentified The B.C. Coroner's Service is seeking the public's help in identifying the man whose body was found near Emerald Estates this spring. image courtesy of whistler RCMP

The BC Coroners Service is asking for the public's help in identifying a man whose body was found April 26 on a mountain bike trail near Green Lake.

The body was discovered April 26 by a cyclist on the No Girly Man trail about 200 metres from Highway 99 in a heavily wooded area at the midpoint of Green Lake. Police believe the death was non-suspicious.

The man, who was estimated at between 50 and 65 years old at the time of his death, is known to have bought food at Nesters on Nov. 13, 2013 and is believed to have died shortly thereafter. He is thought to have suffered from "emotional stress" at the time of his disappearance, according to a release.

The man was described as having long grey hair in a ponytail, between 5'6" and 5'10" in height, with a medium build and no remarkable scars or tattoos. At the time of his death, he was wearing a heavy black three-quarter length winter coat with a fur trimmed hood, under which he wore a dark blue fleece hoodie imprinted with yellow lettering, spelling "Navy" on the chest. He was also wearing black Sportec jogging pants and Sorel winter boots, size 11, and was in possession of bifocal glasses. Among the personal effects in his possession at the scene was a dark backpack with a yellow "Academy of Learning" logo.

Whistler RCMP Staff Sgt. Steve LeClair said officers have pored through missing person reports throughout the province, but have so far been unable to find a potential match, although nine individuals had similar descriptors to the deceased.

"The people that are missing, we've obtained photos from other police forces and examined those photographs to ours, and either temporally or geographically, they're not a match," he said.

Anyone with information is asked to call regional coroner Claire Thompson at 604-660-7735. Photos of all the deceased's personal effects found on the scene can be viewed at www.piquenewsmagazine.com and www.pssg.gov.bc.ca.

A suspect made off with an unloaded gun and several other items after reportedly gaining entry to a home in the 9600 block of Devine Street through a bathroom window last week.

The complainant called police last Tuesday, May 6 to report the break-in, and told officers his semi-automatic, .22 calibre Ruger rifle was missing, along with a handful of other valuables including an Apple iPad. The rifle was locked and unloaded at the time of the incident. No ammunition was stolen, police said.

On the same day, nine mailboxes on the same street were reportedly broken into as well. After attending the scene, police noticed that all of the mailboxes appeared to have been forcibly opened, showing visible tool mark damage, according to LeClair. After speaking with nearby residents, police were able to determine that the incident took place sometime between 2:30 and 5:30 p.m.

The investigation is ongoing.

A Whistler woman who went on a day trip to Vancouver on Sunday, May 11, returned the following morning only to discover her house appeared to have been broken into.

Police said a basement door appeared to have been pried open in order to gain entry.

The complainant said her passport, some jewelry and an Apple computer were stolen.

A Whistler local is missing an expensive mountain bike after his Eva Lake Road home was reportedly broken into on Monday, May 12.

It appears the residence was entered through a small window at the back of the house sometime between the hours of 12:30 p.m. and 6:30 p.m., RCMP said.

The complainant said a large, blue Kona Dawg mountain bike valued at around $2,000 was taken. Several bracelets were allegedly stolen as well.

The investigation is ongoing.