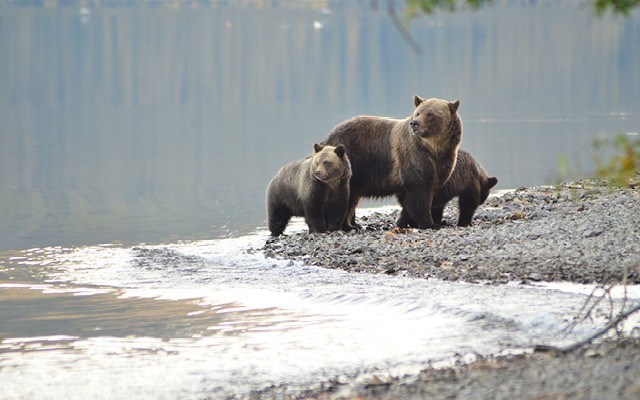 recovering, bearly Support is strong in the Sea to Sky corridor to see grizzly bears come back from the brink of extinction in this area. photo by jeremy williams

From one end of the corridor to the other, and beyond, the Coast to Cascades Grizzly Bear Initiative has rallied sweeping support of local governments to its cause.

It's a move that is giving more weight to its calls for the creation and implementation of provincial grizzly bear recovery plans to help the threatened populations in southwestern B.C.

Whistler was the first to sign on one year ago. Since then, the cause has gathered steam with Pemberton, Lillooet, the Squamish Lillooet Regional District, the Squamish Nation, and just recently, the District of Squamish, echoing the calls for action.

"We view that as tremendous support," said Coast to Cascades field coordinator Johnny Mikes of the steamrolling effect across the corridor. "Our interest is to show to the province that doing the recovery plans and implementing the plans is not a controversial thing to do."

Time, however, is of the essence.

The province has identified five contiguous grizzly bear populations in southwestern B.C. as "threatened." This area is the southern-most line of extirpation for the species, which has steadily risen north over the past 150 years.

Seven years ago, the province approved the Sea to Sky Land and Resource Management Plan (LRMP), which called for long-term sustainable status for the four "threatened" populations that overlap the Sea to Sky area. "Seven years later we're still waiting to get that going," said Mikes. "We don't feel it needs to be an expensive process, or an onerous process, or some sort of massive undertaking. The elements of recovery are pretty basic."

He added that the pieces of the puzzle are all there, developed over the years with significant science to back it up. The key is putting those pieces together in a plan.

"We really think it's time for government to capitalize on that solid, necessary investment in really good science and kick off the recovery planning for these populations."

The provincial government did not respond to a request for an update on the recovery plans by Pique's deadline.

Perhaps, suggested Mikes, the recovery plans could start in one area such as the Stein-Nahatlatch population unit, bounded by the Fraser River, Lillooet and Harrison Lakes and the Duffey Lake portion of Highway 99 and Anderson and Seton Lakes.

There are an estimated 24 bears in this population unit and roughly six breeding females. These are among the most genetically isolated bears in North America and the area is a critical link for the regional grizzly bear recovery.