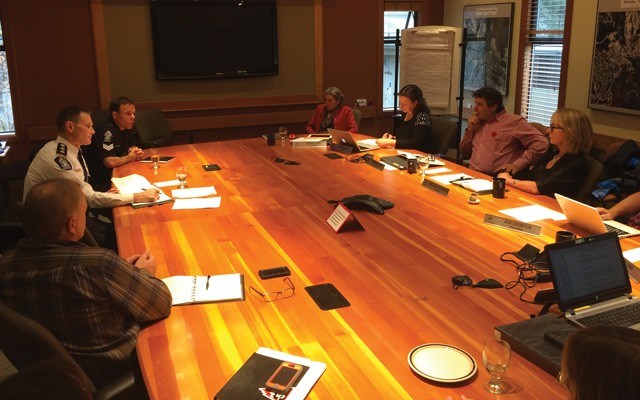 working relationship COS Inspector Murray Smith and Sgt. Simon Gravel present to the Committee of the Whole on Nov. 1. photo by braden dupuis

B.C.'s Conservation Officer Service (COS) remains committed to a transparent working relationship with Whistler stakeholders, despite a challenging few months marked by staff injuries and staffing changes that led to a gap in communication with local bear advocates.

At a Nov. 1 Committee of the Whole meeting, Inspector Murray Smith of the COS took the blame for a recent "breakdown in communication protocol" with local stakeholders.

The COS and Resort Municipality of Whistler (RMOW) have a Letter of Agreement that states, among other things, that COS will provide regular updates to all local stakeholders, including RMOW staff and the Get Bear Smart Society, and immediate notification if a bear is removed from the local population.

"I came in in March and so the community of Whistler is a little bit new to me, and some of these agreements are (as well)," Smith said at the meeting.

"That mistake came from myself... but we've reestablished that, and those statistics will be sent to (the RMOW)."

From now on, however, COS will send the stats to the RMOW, which will then provide them to the other stakeholders.

"I think moving forward we'd like to do it that way, it's just a bit more of a streamlined process," Smith said after the meeting.

"We're a small group of staff and right now it's just a really tough time... trying to find people to do all these requests."

There are currently three COs and one sergeant, serving the entire area between West Vancouver and Pemberton. From April of this year, COS has received 1,100 calls related to black bears alone in the region — 205 of which came from Whistler.

"The nature of those calls are very diverse," Sgt. Simon Gravel said at the meeting.

"It can be a report of a bear in the park close to the school, a bear in the village, it could be an attractant complaint... But we're talking about thousands of calls every year that we receive between West Van and Pemberton."

While COS officers do make mistakes, Gravel said the agency does not shy away from or hide those mistakes, instead using them to learn.

"We are passionate as an agency to protect our wildlife and our environment as a whole, and we are extremely engaged, and we believe we are good at it," Gravel said.

"We have over 100 years of experience, but we're not perfect. Like any other agency we have always things to learn, and like any other agencies we do make mistakes sometimes, and we're learning from our mistakes."

Reached by email for comment while on vacation, Sylvia Dolson of the Get Bear Smart Society (GBS) said the GBS won't always be in agreement with COS.

"It needs to be understood that GBS advocates on behalf of the bears and that we're not always going to support COS actions — particularly when we consider a destruction to be unnecessary," Dolson wrote.

"If we don't share the same view, that doesn't mean that the door to communications should be closed. It means that more dialogue is needed to understand each other's positions and to move forward in a more positive direction."

At the end of the meeting, Whistler Mayor Nancy Wilhelm-Morden reiterated how important the relationship between the parties is.

"Whistler is really proud to be a Bear Smart community, and I know I don't have to tell you this, but our bear population is very important to us, to the point where, as you know, we name bears and do things like that," the mayor said.

"But one of the things that's really critical to us and to the health of our bear population is a very good solid working relationship with the COS."

COS received 73 black bear calls in Whistler in September, attending to 16 of them, according to stats provided by the COS.

No bears were destroyed or translocated by COS in September, though one bear was categorized as "destroyed by other."

In October, COS received 36 calls, attending to three of them and destroying one bear (on Oct. 12).

At its Nov. 1 meeting, RMOW council adopted an update to its 2009 Human-Bear Conflict Management Plan.

The updated plan includes new recommendations for the next five years, such as planning future trail and recreation sites with grizzly bears in mind, providing funding for third party bear managers or engaging volunteers to supplement COS response, reviewing the RMOW Special Events Guidelines annually and investigating opportunities for improving access to waste depots for residents without cars.