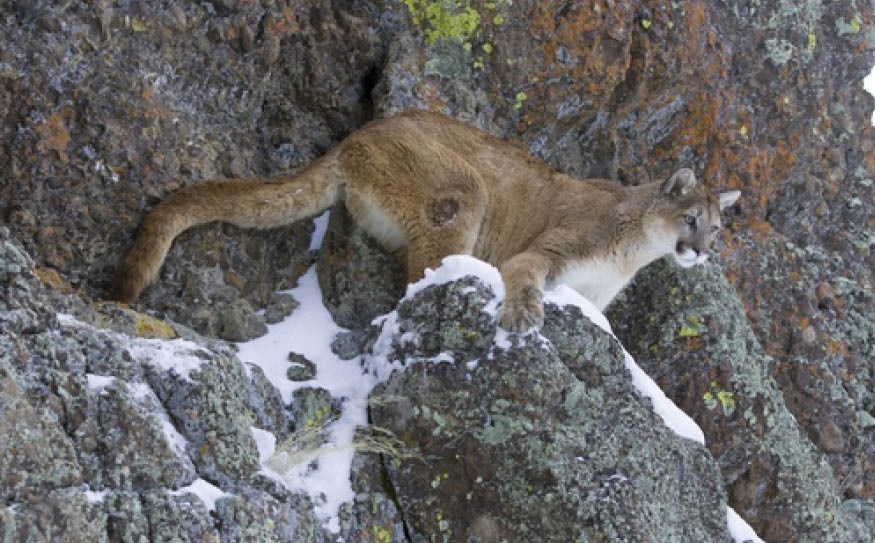 Monique Joyce and her dog Joey felt a little like they were on the wrong side of the fence at the zoo while out for a walk Monday morning near Function Junction.

While walking in the woods on a trail near the intersection of Millar Creek Road and Alpha Lake Road, as she often does with her dog, Joyce and Joey happened upon a cougar. She and the dog startled the cat after it had successfully captured prey.

"It was huge," she said when asked if she was certain she saw a cougar as opposed to a bobcat, which are more common in Whistler.

"The cougar decided to run up the hill," said Joyce. "We started walking backward down the trail and we wanted to see if it was going to come and get us and that's when I saw the kill."

The area where the cat was feeding was covered in blood and fur. Joyce said she couldn't tell what animal the cougar had been feeding on because she just wanted to get out of the area. Inspector Chris Doyle of the Conservation Officer Service (COS) told Joyce later that it was a deer.

Sgt. Peter Busink of the COS said Doyle checked out the area and concluded the cougar had stashed a deer kill near the trail Joyce was on with her dog.

"In a situation like this cougars have been known to defend food caches especially when they're hungry and it presents an unknown risk to the public at that point," said Busink.

He said he called the Whistler bylaw department and requested the posting of signs in the area warning of the cougar sighting. According to Busink, people should stay off the trail until at least Jan. 16.

As part of his efforts to get the word out Busink said he contacted news outlets and requested help in making people aware of the risk through the use of the trails in the central part of Function Junction.

"In this case the cougar is just doing what a cougar does," said Busink. "We're just letting it be.

"There isn't anything out of the ordinary," said the conservation officer. "Because it is an area of a known trail and where people walk we wanted to make sure we at least provide people with information that there is a cougar in the area."

Joyce had one final thought for the cougar that she unexpectedly met in the forest.

"I would hate to see something happen to that cougar because we were walking through its territory," said Joyce.

The COS is interested in hearing about any future sightings of large wildlife, particularly cougars. To report sightings, call the Ministry of Environment's report line at 1-877-952-7277.