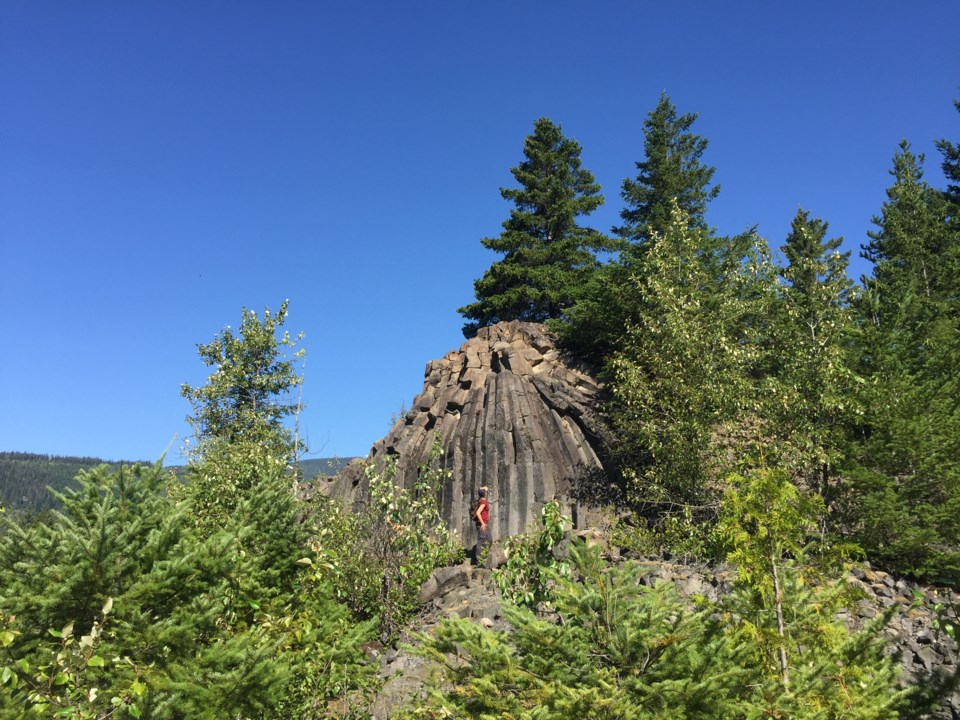 The basalt features at Cal-Cheak north are one of four sites that will form the nucleus of a proposed geopark. PHOTO BY LESLIE ANTHONY

After a slight setback, the Resort Municipality of Whistler (RMOW) is once again advancing a project to pursue a United Nations Educational, Scientific and Cultural Organization (UNESCO) Global Geopark designation in the Sea to Sky.

Not only would the project highlight the region’s eclectic and dynamic natural environment through interpretive experiences, it would also secure much-needed outdoor recreational space in the community, said manager of cultural planning and development John Rae, in a presentation to council on Sept. 15.

“The reason for wanting to add that outdoor recreational space is to enhance opportunities for physical and mental health, life-long learning, as well as help us now with dispersion,” Rae said.

A geopark is defined by UNESCO as a “single, unified geographical area where sites and landscapes of international geological significance are managed with a holistic concept of protection, education and sustainable development.”

There are currently 161 worldwide, including five in Canada (Tumbler Ridge became B.C.’s first and only geopark in 2014).

In Whistler, it would begin with four sites (of a potential 60 identified throughout the Sea to Sky) connected by and accessed from the Sea to Sky Trail: The Cheakamus lava escarpment, the volcanic crater at Loggers Lake, Basalt features near Cal-Cheak north and the lava-glacier-bedrock contact gorge at Cal-Cheak south.

The proposed geopark would cover about 2,500 square kilometres, and will include the installation of interpretation materials, as well as trail improvements and infrastructure like boardwalks and viewing platforms, Rae said.

The RMOW recently got word that it has secured a trademark for the geopark’s name, he added: the Sea to Sky Fire & Ice Geopark.

“The fire and ice, of course, comes from volcanism and glaciation, with the interplay of plates,” Rae said.

At its Sept. 15 meeting, council authorized a grant application to the Canada-British Columbia Investing in Canada Infrastructure Program, as well as a budget allocation of $229,385 over five years (in addition to $180,000 already budgeted).

If successful, the Government of Canada would contribute up to 40 per cent of the project’s total cost (estimated at about $1.5 million), while the province would kick in up to one third—putting the RMOW’s contribution somewhere in the $410,000 range, all proposed to come from provincial Resort Municipality Initiative funding.

It’s not the first time council has endorsed a grant for the project—an application for the same grant was denied in early 2019.

“We’ve had several conversations with the program officer at the B.C. Ministry of Municipal Affairs,” Rae said.

“I’m not going to suggest that he said ‘you came this close,’ but we were very encouraged by his response.”

Council expressed support for the project, including Councillor John Grills, though he wondered about a potential “Joffre Lakes effect”—showcasing a hidden treasure and inundating it with crowds.

“When you’re talking to these experts on your team, has there been concerns about all of a sudden … we create something bigger than we want it to be?” Grills asked.

The geopark will be first and foremost a community amenity, and the RMOW will “have to be very mindful about how we promote it, about how we communicate it, how we position it,” Rae said.

“It has the added benefit of being a long-term tourism amenity as well, but this is about health, life-long learning; this is about sense of pride in our own place.”

Coun. Ralph Forsyth shared the rest of council’s enthusiasm, but expressed concerns about the ongoing security of RMI money.

“There is uncertainty about the amount of RMI funding that we’re going to have moving forward, and there other projects that are going to need money,” he said, wondering what happens to the extra $230,000 if the grant is denied again.

“As attractive as it is, and as professional as our presentations are, I have concerns.”

Aside from the $180,000 already budgeted, any additional money wouldn’t be spent until the grant was confirmed, noted interim general manager of resort experience Toni Metcalf.

“The team can continue to be working through the plan [using what’s already budgeted], and identify elements that would make sense that could be standalone,” Metcalf said.

“And then subject to the grant, they could then be looking at that [additional spend].”