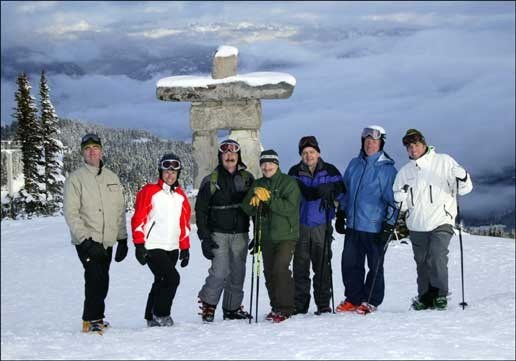 It was a big payday for Whistler’s elected officials Tuesday night as council unanimously approved a hefty wage increase for themselves.

Effective immediately, the mayor’s salary is jumping more than $25,000 a year and each councillor will be making an additional $10,000 a year.

Collectively that represents an additional $85,000 in new wages for council, and roughly a 50 per cent rise in their individual paycheques.

Council made the decision Tuesday night with little debate. The increase was based on the average of the six Lower Mainland communities, which are used by the resort municipality to gauge their employee salaries.

The day after the meeting Mayor Ken Melamed admitted it was an uncomfortable position to be in – giving yourself a large pay raise. And he did not doubt there would be negative reaction, as well as positive reaction, from the community.

"I expect there’s going to be people on both sides as usual," he said.

"It does appear as a huge increase."

But he stood behind council’s decision.

"This is an attempt to catch up and make it right."

The decision to give themselves a pay raise stems back to the last council after a remuneration committee, made up of three community members, recommended only a $1,000 increase for councillors, based on a 20-hour workweek, and nothing extra for the mayor.

"I felt that we did really good research into what was competitive in the area," Sue Adams said Wednesday of the work done by that committee.

She explained that they did a comparative analysis of not only the Lower Mainland municipalities but also towns of similar size, such as Banff. They also interviewed each member of the past council.

"Certainly the message that we got from the previous mayor and council was that it was a way of contributing back to your community and it shouldn’t be considered as employment per se," said Adams.

She questioned the size of the new increase.

That committee’s recommendation for a minor pay rise, said Melamed, shocked some members of the last council.

When asked why he supported that decision at the time, Melamed explained that he felt bound to go with the committee’s opinion.

"When council strikes a committee and asks it for its opinion you’re pretty much bound to go with the opinion," he explained. "That’s what we did."

But the ramifications of that decision rippled through council and former Councillor Caroline Lamont sited the poor pay as one of her reasons not to seek re-election in November. She was, however, the only member of the last council to vote against the committee’s recommendation though several others voiced concerns about it at the time.

Reached on Wednesday Lamont said the new pay increase was a good thing but she wished it had been done before the election to allow people who perhaps thought they could not afford to run to reconsider.

"That (the increase) makes all the difference," she said, adding that it could have changed her mind to seek re-election.

"That type of raise would have made me think about it a lot more. It really would have."

Her actions not to run again speak to one of council’s major concerns about the pay scale for Whistler’s elected officials; it wasn’t enough to tempt average working people to run for office.

Speaking candidly Melamed said taking the position as mayor at $55,000 represented a 50 per cent cut in his pay. Previously he was a self-employed stonemason.

"Nobody is in it for the money," he said.

"It has to be recognized that whoever’s filling that seat is taking a significant financial hit and so in my view that raise is completely justified," he said. "I think it’s reasonable."

Not so, he said, the pay hike for councillors, a position he sees more as an honorarium. He called the raise excessive.

"I think the last council, when we looked at this issue, concluded that the answer was not more money, the answer was more efficient use of our time so that there was less of a financial burden as a result," he said.

At its final meeting the last council agreed the new council should do an immediate review of their remuneration, and implement the results of that review immediately.

And so, at the end of May the municipality’s new Finance and Audit Committee met to discuss the issue. Its members are made up of three councillors, Nancy Wilhelm-Morden, Bob Lorriman and Eckhard Zeidler, and two municipal staff members. They reviewed the six Greater Vancouver Regional District municipalities that are used to establish employee compensation.

"It appears that our stipend was quite significantly out of whack," explained committee chair Wilhelm-Morden at Tuesday’s council meeting.

The highest paid politicians lived in the City of Coquitlam where councillors made more than $37,000 and the mayor more than $103,000.

Adams questioned the work done in a place like Coquitlam as a comparison to Whistler.

"I would think that there is business on a greater scale in somewhere like Coquitlam," she said.

And while there is also the question of an increasing workload as preparations ramp up for the 2010 Games, Adams said staff have been put in place to accommodate that work, such as Jim Godfrey’s $200,000-plus position.

Wilhelm-Morden, who has served on council three other times in the past, said this time around it’s a bigger workload than ever before.

"The time requirements are more significant than they were on any of the three previous council’s I sat on," she said.

The issues have greater ramifications, she added, and there’s more to consider. Some of those weighty decisions they’ve had to grapple with to date have been the privatization of the wastewater treatment plant upgrades, the athletes’ village and the arena development on Lot 1/9.

"I think we’re in the right place now and I think we got there by the right method," said Councillor Gordon McKeever, who had been disappointed in the minor raise during the last council’s term.

Council remuneration will be reviewed at the start of term for each council.